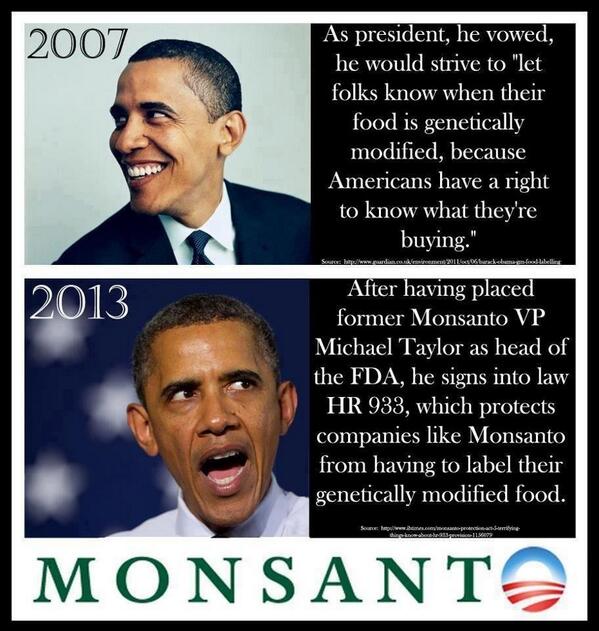 A couple of years ago, a bill was introduced (H.R. 933) allowing big biotech corporations, like Monsanto, to override United States federal courts on the issue of planting experimental genetically engineered crops all across the US. This rendered the government powerless when it came to stopping other biotechnology corporations from planting and harvesting. The measure shields sellers of genetically modified seeds from lawsuits, even if the resulting crops cause harm. As a result, the public labelled this bill “The Monsanto Protection Act.”

This time, a bill has been introduced, dubbed the “Safe and Accurate Food Labeling Act Of 2015.” Proposed by United States Congressman Mike Pompeo, the bill is aimed at overriding bills in roughly two dozen states that would require foods made with genetically engineered crops to be labeled as such.

“Activists in nearly 30 states are considering legislation that would require government warning labels on food products containing ingredients derived from biotechnology. These common ingredients, which include corn, soybeans, and sugar beets, are safe to eat. Unfortunately, activists are demanding an official notice that food may contain these ingredients. If consumers are misled to believe the food supply isn’t safe, there is little incentive to innovate or grow these important crops.” (source)

He goes on to state that:

“As part of the process, they portrayed the various concerns as merely the ignorant opinions of misinformed individuals – and derided them as not only unscientific, but anti-science. They then set to work to convince the public and government officials, through the dissemination of false information, that there was an overwhelming expert consensus, based on solid evidence, that the new foods were safe.” – Jane Goodall (source)

Sure, as the congressman points out, there have been many publications outlining the supposed safety of genetically modified foods. At the same time, there have been just as many publications outlining their potential danger, which makes it clear that they should not be approved completely safe for consumption. The science alone warrants a label, why is this research constantly ignored?

“The safety of GMO foods is unproven and a growing body of research connects these foods with health concerns and environmental damage. For this reason, most developed nations have policies requiring mandatory labeling of GMO foods at the very least, and some have issued bans on GMO food production and imports.” – David Suzuki, geneticist, academic, environmental activist (source)

For example, here is a study, published by Environmental Sciences Europe, linking GMOs to cancer and liver/kidney damage, as well as severe hormonal disruption. You can read more about that story here.

Here is a study a study recently published in the Journal of Organic Systems last September that found a “very strong correlation” between GMOs and two dozen diseases. You can read more about that story here.

I could probably post 100 studies, but I’m not going to do your research for you. Feel free to browse through our site or do some research on your own. Numerous concerns have been raised with GMOs that deserve serious attention, and, as Suzuki states in the quote above, should  have our food industry/governments labeling these products so consumers know what they are eating.

There are so many problems associated with consumption of these crops, and that doesn’t even include the pesticides that go hand in and with GMOs. These have been linked to cancer, birth defects, Alzheimer’s, Parkinson’s, and much more.

Here are some studies showing what happens to your body when you switch to organic food.

A worldwide movement is currently taking place that has seen millions of activists gather from all over the world, voicing their desire to have a mandatory GMO label on all food. This would provide consumers with an option, a choice, and the awareness that their food was genetically modified. Seems harmless, doesn’t it? After all, nobody can really argue against the fact that we should have a right to know what is in our food, so why not just label it? More than 60 countries across the globe already require mandatory GMO labeling, and it’s time for Canada and the United States to catch up, but it’s not an easy process.

I’m going to leave you with this:

“Altered Genes, Twisted Truth will stand as a landmark. It should be required reading in every university biology course.” – Joseph Cummins, Ph.D. Professor Emeritus of Genetics, Western University, London, Ontario

You can learn more about that book and what it’s about,  HERE.