“This mendacious piece of crap supported and promoted this trade deal while operating as secretary of state under Obama…….Now, because it is a loser, suddenly she opposes it? This creature knows no lows……….she would do anything to gain power regardless of the fact nobody wants her. She is playing the same losing game as last time, that of “inevitable front runner….”

If the democrats are fool enough to run her, they will lose. 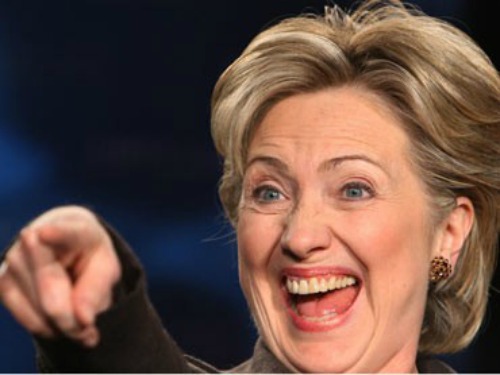 Democratic Party presidential nominee Hillary Clinton has come out against “fast-track” approval powers sought by the White House that would allow only the Executive Branch to negotiate trade deals like the Trans-Pacific Partnership.

President Barack Obama, most congressional Republicans, and some Democrats are backing fast-track authority — officially called Trade Promotion Authority — which would bar Congress from debating or amending major so-called free trade agreements like the 12-nation Trans-Pacific Partnership (TPP) and the Transatlantic Trade and Investment Partnership (TTIP) between the United States and the European Union. The US House approved standalone fast-track authority on Thursday, meaning the Senate must now vote.

All votes on the legislation have been close, and it’s unclear what way they would go during the Senate vote next week. With her political weight, Clinton was under pressure to speak her opinion on the legislation. She parted ways with Obama, her former boss and Democratic Party standard-bearer, by backing away from support for fast-track authority, telling journalist Jon Ralston that if she were still a US senator, she would not vote for such presidential power.

“I certainly would not vote for it unless I was absolutely confident that we would get Trade Adjustment Assistance,” she said, alluding to fast-track authority’s sister legislation that would provide assistance to workers who lose jobs as a consequence of the trade deals and foreign competition.

Trade Adjustment Assistance (TAA) was easily defeated in the House last week. House lawmakers were set to vote once again on the TAA this week, but on Thursday they agreed to vote only on a standalone TPA measure. Though the TPA and the TAA were already both passed in the Senate, the TPA will now return to the Senate in its standalone form. That Senate vote on TPA and a separate vote on Trade Adjustment Assistance are set to occur on Tuesday.

Fast-track authority is a process vote, Clinton insisted, and her disagreement with the concept does not signal opposition to the likes of the TPP or TTiP.

Both Republicans and Democrats have criticized Clinton for waffling on her position regarding fast-track authority and the trade agreements in general. She had previously signaled reservation in offering a solid stance on the trade negotiations, which have been kept secret by the participating nations.

“The TPA is a process issue. The issue for me is, what’s in the deal?” Clinton said Monday, according to the National Journal. “I will wait and see what the deal is, and then I will tell you what I think about it.”

Labor unions and environmental advocates, both traditional Democratic constituencies that oppose the TPP and TTiP, have also criticized Clinton, a former US secretary of State, for her lack of candor.

“If [Obama] wants to get fast-track authority, then he’s going to have to try to figure out how to use the vote on Friday, to get some changes, to get fast track authority,” Clinton said this week during a campaign stop in New Hampshire, avoiding a solid answer on her position. “There’s always room to maneuver, and I think this is one of those times.”

The TPP agreement covers countries which together comprise 40 percent of the global economy. Along with the United States, 11 other countries have taken part in the deal’s negotiations: Australia, Brunei, Canada, Chile, Japan, Malaysia, Mexico, New Zealand, Peru, Singapore, and Vietnam.

President Obama has promoted the deal as a way of solidifying economic relations between the United States and fast-growing Asian countries that surround China.The deal’s supporters claim the deal will promote innovation and enhance trade.

“TPP is good for American businesses and American workers…we will make the case on the merits as to why it will open up markets for American goods, American exports, and create American jobs,” Obama said in a statement on April 28.

Unions, among many others, have lined up to oppose the TPP based on concerns over a number of issues, including currency manipulation, environmental protections, internet privacy, transparency, and local control. The economic benefits of the deal will go to corporations, not workers in any of the participating nations, opponents say.

The deal has also been criticized for lack of transparency, as the contents of the TPP have been kept in strict secrecy. Leaked drafts of TPP negotiations have suggested that corporations would be allowed to sue governments in private courts over profits lost due to regulation.

Senator Elizabeth Warren (D-Mass.) proposed an amendment that would have struck down this arrangement, known as the Investor-State Dispute Settlement system (ISDS). Liberal Democrats have blasted the ISDS as a means corporations could use to undermine US laws.

The White House has argued that some degree of secrecy was necessary for negotiating a good deal, and that critics must point to specific issues in the TPP, as opposed to criticizing previous free trade pacts, such as the North American Free Trade Agreement of the 1990s.

However, one former Obama campaign adviser who had clearance to access TPP drafts, wrote that disclosing anything from the documents would be a criminal offense.

“The government has created a perfect Catch 22: The law prohibits us from talking about the specifics of what we’ve seen, allowing the president to criticize us for not being specific,” Michael Wessel wrote in Politico. “Instead of simply admitting that he disagrees with me—and with many other cleared advisors—about the merits of the TPP, the president instead pretends that our specific, pointed criticisms don’t exist.”

Ts and Ps: A guide

TPA: Trade Promotion Authority, more popularly known as ‘fast-track’ authority for the US president to approve details of large trade agreements without official input from Congress

TTIP: Transatlantic Trade and Investment Partnership, a trade deal being negotiated between the US and the EU

TAA: Trade Adjustment Assistance, or legislation that would provide assistance to workers who would lose jobs as a consequence of trade deals. If approved, current TAA bills would extend the decades-old program and expand the benefits to public and service sector workers in addition to those already covered.