– IMF Says It Will Continue Lending To Ukraine Even After A Default, And Why This Is Bad News For Greek Gold (ZeroHedge, June 13, 2015):

With Tsipras’ delegation in Brussels desperate to work out a last minute deal and preserve Greek pension cut “red lines”, not to mention Greece in the Eurozone, it is the IMF which has become the biggest hurdle to getting a deal done because while even the European Commission is ready defer €400 million of cuts in small pensions if Greece reduced military spending by same amount, the IMF promptly scuttled this suggestion according to FAZ.

So as we enter Sunday and what may well be the last possibility to get deal done before the “accidental” Grexit scenario is put in play, we thought our Greek readers would be interested to learn that while Lagarde’s “apolitical” IMF is digging in tooth and nail against giving Greece even the smallest amount of breathing room, the equivalent of half an our of a typical daily Fed POMO notional amount, yesterday the same Lagarde said that the IMF “could lend to Ukraine even if Ukraine determines it cannot service its debt.“

This is the same Ukraine whose bonds last week tumbled by 9% after the country’s American finance minister Natalie Jaresko said Ukraine will default on its debt unless creditors (among which both Russia and the US taxpayer via the IMF in addition to various hedge and mutual funds all used to getting a last minute bailout on their terrible investments) acquiesce to their demands for more aid (i.e., more debt).

Lagarde’s statement also indicates that the Hermes and tanning bad connoisseur does not know the difference between a loan and an equity investment, which is what “lending” to an insolvent Ukraine would be equivalent to.

But more to the point, the very reason why the IMF has kept such a hard line position with Greece is precisely because the IMF alleges that unless Greece takes steps to solvency, the DC-based IMF will no longer give the country funds sourced primarily courtesy of US taxpayers.

In other words, under pressure by someone (and ZH readers know who), what for the IMF is a deal killer in Greece, is not even a small stumbling block when it comes to Kiev.

IMF chief Christine Lagarde has reassured Ukraine that funds can still be made available even if the country fails to repay its private creditors. She ruled out resorting to national reserves to avoid defaulting.

Christine Lagarde, head of the Washington-based crisis lender, which had launched a four-year loan program of $17.5 billion (15.6 billion euros) in March for Ukraine’s government, said that the IMF was still encouraging a settlement in the debt talks, while highlighting that there were backup options in place.

“I believe that their program warrants the support of the international community, including the private sector, which is indispensable for the success of this program,” Lagarde said. She stressed that the IMF did not have to cut off its funding of the Ukraine government if it stopped servicing its private debts.

“But in the event that a negotiated settlement with private creditors is not reached and the country determines that it cannot service its debt, the fund can lend to Ukraine consistent with its lending-into-arrears policy,” Lagarde explained.

There actually is such a thing: as the following document reveals there is an “IMF Policy on Lending into Arrears to Private Creditors“, one which a 2006 paper described as merely encouraging moral hazard. Although with the world so far past the point of terminal insolvency, with capital markets centrally-planned from Tokyo to Shanghai to Frankfurt to New York, regional or global moral hazard is the last concern on anyone’s mind.

Also, sadly for Greece which barely has any private creditors left as all the debt has been funneled over to the public sector and the ECB, this loophole is impractical.

Actually, there is one loophole.

When talking about Ukraine, Lagarde ruled out recent speculations saying that Ukraine could use its central bank reserves to pay back creditors. The reserves of the National Bank of Ukraine “cannot be used for sovereign debt service without the government incurring new debt,” which she said ran against the aims of the IMF bailout program for the troubled country.

Actually, the reason why the reserves of Ukraine, which already received $5 billion from the IMF loan in March with the proceeds long since sent offshore by criminal, US-muppet politicians, can not be used is simple: with foreign reserves barely there, Ukraine’s true reserve, gold, was long ago confiscated and/or sold in the open market as we reported last November when Ukraine Admitted Its Gold Is Gone: “There Is Almost No Gold Left In The Central Bank Vault.”

Some 112.5 tons of gold to be precise, or a fraction more than the infamous Bank of International Settlements, which at today’s price of gold is just over $4 billion, or enough to keep Greece solvent for a month or so. 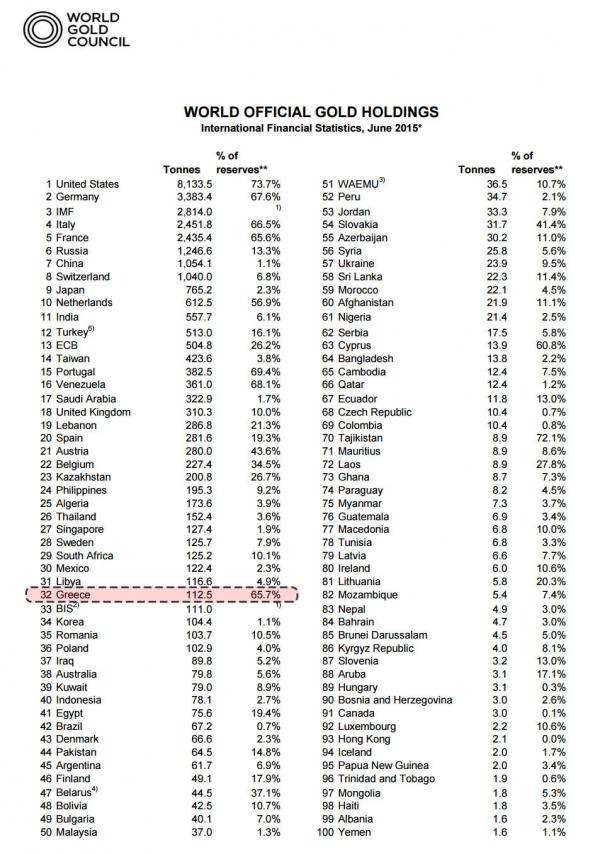 It is also an amount which the BIS, or any other central bank would be delighted to take. Why just today the NY Fed learned it will have to part with another $1 billion in gold to satisfy a suddenly very concerned about its assets state of Texas.

So one wonders: will Greece use its last card, and agree to dump its gold using the proceeds to repay 1-2 months of arrears to the IMF or the ECB which will gladly print the money it needs to purchase all the gold Greece has to sell.

And if so, just how will the Greek population react it when it learns that it too was “Ukrained” and sold out by its corrupt western-puppet politicians to the highest central bank bidder, all of which can print fiat but none can print physical gold?