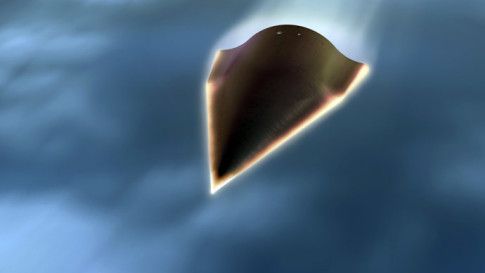 The Chinese Defense Ministry confirmed the fourth test of a hypersonic nuclear delivery vehicle, which the US called an “extreme maneuver,” amid rising tensions between the two powers in the South China Sea.

The test of the hypersonic glide vehicle, which the US has dubbed the “WU-14”, was carried out on June 7 and is the missile’s fourth test in 18 months.

“The scheduled scientific research and experiments in our territory is normal, and those tests are not targeted at any country and specific goals,” the ministry said in response to a report published on Thursday by the Free Beacon.

The strategic strike weapon is extremely advanced and can travel at 10 times the speed of sound, or 12,231.01kph.

US missile defenses can only counter ballistic missiles and warheads that have predictable trajectories. The Wu-14 is capable of maneuvering during flight while travelling at the edge of space, and so is extremely difficult to shoot down.

US intelligence officials have called the tests “extreme maneuvers,” but experts say the timing of the test launch was designed to coincide with a visit to Washington by Fan Changlong, vice-chairman of the Central Military Commission.

Fan will visit the US for a week and the launch was timed to increase his “bargaining power [at] the negotiating table when he deals with his US counterpart,” Macau-based military observer Antony Wong told the South China Post.

Fan held talks with US Defense Secretary Ash Carter on Friday. The disputed islands in the South China Sea were top of their agenda, according to Chinese state media.

The US thinks China is acting aggressively in the South China Sea and Carter “called on China and all claimants to implement a lasting halt on land reclamation, cease further militarization, and pursue a peaceful resolution of territorial disputes in accordance with international law,” the Pentagon said in a statement on the meeting.

China maintains most of the South China Sea is its own, but there are overlapping claims with the Philippines, Brunei, Malaysia, Taiwan and Vietnam.

Hawks in Congress said Fan’s visit to the US should have been canceled, because of recent reports of US government computer networks being hacked by the Chinese military.

The WU-14’s test flight was also interpreted by some military analysts in China as a response to a flight over the South China Sea by a US spy plane last month.

But the analysts also stressed the WU-14 is primarily a defensive and not an offensive weapon, although it is capable of carrying nuclear warheads.

“The Wu-14 … is designed to penetrate US missile defense systems, meaning the PLA is capable of defending China’s territorial sovereignty. But such a test is only a nuclear deterrent. Neither China nor the US wants to declare war over the South China Sea issues,” said Professor He Qisong, a defense policy specialist at the Shanghai University of Political Science and Law.