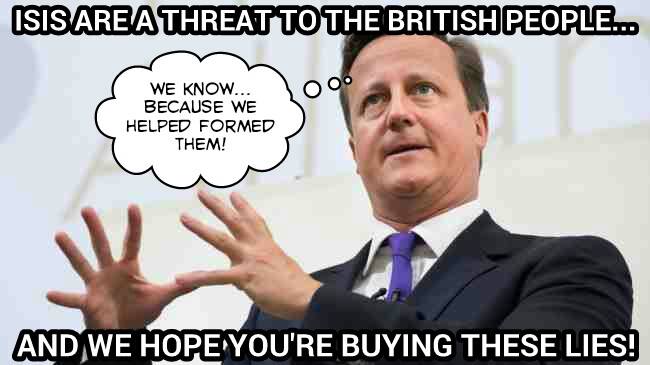 – Cameron wants to fight terrorism? Anyone ever going to suggest a change in foreign policy? Oh I forgot – foreign policy wasn’t an issue in the General election. (GMMuk, June 12, 2015):

Whenever Cameron mentions this terrible terrorist threat that’s engulfing our planet, I struggle not to throw up. However when I talk to someone who’s fallen for this tripe, my only wish is to heave all over them! Here are my three perspectives –

1) Whatever Cameron or anyone says about terrorism & our security, these are facts: We are around a million times more likely to be struck down by heart disease or Cancer than by an act of terror (false flag or not). Now this may or may not surprise people but what if I said we’ve been fighting this war on terror for over 13 years. We’re agreed on that. Well…. do you feel we’re fighting any kind of war against heart disease & Cancer? I BLOODY DON’T!

Alright. We have 4 categories –

Take your pick – out of the 4, which one do you think in terms of loss of life should concern us the least? Incredible as it may seem, there’s more chance of dying from the first three than a terrorist attack. Are you still happy with the way our politicians & media have been ramping up the fear factor?

And what about those who are supposed to serve & protect the public, you know the tooled up, truncheon weilding, body armoured, taser shooting, friendly neighborhood bobby on the beat? Well, whether you like it or not, we’re 10 times more likely to meet our maker at the hands of a Policeman than a terrorist! We’re lucky in the UK, for on the other side of the pond, US citizens are nearer to 100 times more likely to be killed by a Policeman.

Food for thought: I believe I’m perfectly within my rights to say the media couldn’t have done more to promote the fear of terrorism. But I’m a reasonable man. For argument’s sake, let’s just say the media has been a mouthpiece for the war on terror. Can anyone seriously deny this? Right. Okay. Now ask yourself – how come the media has never so much as mentioned any of the outrageous anomalies I’ve just highlighted here?

2) Bear in mind, even though Iraq & Afghanistan never so much as looked boss-eyed at us, Tony Blair decided we had to attack. As a result the UK was instrumental in wreaking untold havoc onto these two nations. If the boot was on the other foot, every person in this country would harbor the deepest resentment & anger toward the invading aggressors. However, it then becomes obvious there was no justification whatsoever for going to war. We were fed a pack of lies. Today it’s generally accepted Iraq, in particular, was a dreadful ‘mistake’.

So along comes David Cameron who time & again insists his aim is to safeguard the people of the UK from terrorism, even yearning to further erode our civil liberties for the purpose of tackling this so-called threat. So I ask, after all that’s occurred in Iraq & Afghanistan, do you honestly believe Cameron was helping to ensure our security by PROCEEDING TO REDUCE LIBYA & SYRIA TO RUBBLE AS WELL? I mean talk about pouring oil on the fire, Cameron simply picked up from where Blair left off. If anything his actions couldn’t have been more appropriate for CREATING terrorism!

And to cap it all, when Israel makes it abundantly clear that when it comes to acts of barbarism & terror they’re in a class of their own, would you continue to offer your unconditional support to the mass-murdering maniac Netanyahu & expect Arabs & Muslims not to feel even more aggrieved? Cameron’s reaction to Israel’s recent bout of ethnic cleansing in Gaza was to refer to this abominable war criminal as Bibi, his buddy. I’d say Cameron has done everything in his power to piss off as many Arabs & Muslims as possible. Cameron is a traitor who is conspiring against his own people.

3) The final option is to believe what Cameron & the media is saying. If so, my advice to you is this: go to the nearest mirror, preferably a large one. Take a nice deep breath. Relax. Then after a long, hard look at yourself & repeat these words – I am looking at a person who has the brains of a rocking horse!

2 thoughts on “Cameron wants to fight terrorism? Anyone ever going to suggest a change in foreign policy? Oh I forgot – foreign policy wasn’t an issue in the General election.”