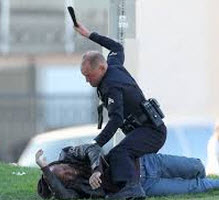 The TSA Is a Complete Waste of Time

Today, we continue our series “The Good, the Bad and the Ugly.” As you’ll recall, our premise is that in a world where everyone is a lawbreaker, it’s hard to spot the real criminals.

Below, we turn to the bad …

Last week came a report proving that the TSA has been wasting our time and shamelessly bullying us all for years. There was always a surreal and even cruel quality to airport security checks.

We recall how we stood in line, as the TSA agents forced a frail, old lady, well into her 90s, to get up from her wheelchair… painfully shuffle into the body scanner… stand with her hands over her head… and totter out the other side. 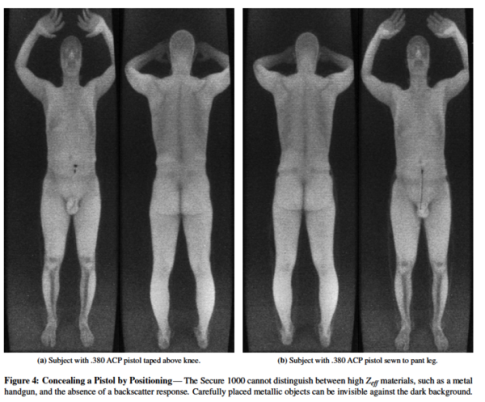 An image from the curiously aptly named “Rapiscan” full body scanner employed by the TSA. University researchers set out to prove that the scanners are completely worthless – and prove it they did. What you can obviously not see above is that the man undergoing the scan is actually concealing a gun. In fact, one can get “anything” through these scanners undetected.

She could barely stand… but the scan proved inconclusive. We looked on in disbelief as the TSA agent forced her to repeat the exercise. Did anyone believe the frail woman posed a threat to airline safety? The TSA agents? The people lined up, waiting to go through the same routine? Of course not…

But no one objected – not even her son, your editor. We have all been trained to keep our mouths shut, even when we are subjected to senseless inconveniences and indignities. To what end?

A study done by the TSA found travelers were easily able to smuggle mock weapons and fake explosives past the screeners. In 67 out of 70 cases, TSA agents missed the banned items and let the passenger go by. If they had been real terrorists, Washington might be a smoking ruin by now. Two questions arise: Why bother? And why haven’t there been more terrorist attacks?

The first is easily answered: The security checks could be stopped immediately with no appreciable loss in real safety. The second question is easily answered, too: There aren’t any terrorists. Or there are so few, it is not worth worrying about them.

Yes, the Department of Homeland Security is just an excuse to scare people, boss them around, and take their money. Wait, you might say… If we send the TSA packing, terrorists may take it as a green light to go on the offense. But what difference would it make?

Nine out of ten of them would glide through the checkpoints anyway. Also in the news is the Export-Import Bank. It helps American companies sell their products overseas by financing and subsidizing the purchases for foreign buyers.

This costs U.S. taxpayers money – about $2 billion over the next 10 years. But it boosts the profits of the companies involved. It is nothing but legalized larceny. It takes money from some people against their will and gives it to others. Most favored is Boeing.

A small group in Congress has been trying to get rid of the Export-Import Bank for decades. But it is an uphill battle. Naturally, the cronies want to keep this zombie institution alive. And the U.S. Chamber of Commerce – a nest of cronyism – has launched a $1-million campaign to save it. 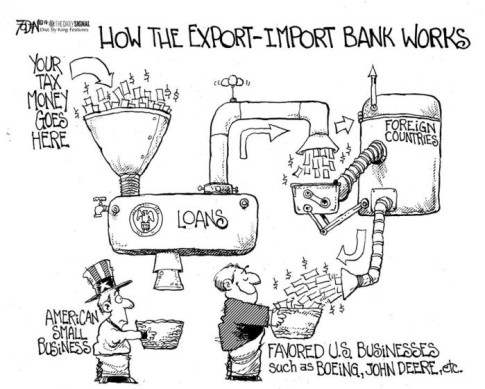 When the Crooks Are the Cops

Here’s another candidate for the “bad” category: DEA agents and local police deserve a good whack with a hard stick. Thanks to the Department of Justice’s “civil asset forfeiture” program, they’ve been helping themselves to other people’s money by pretending the money has done something wrong.

Normally, a civil – as opposed to a criminal – procedure involves a dispute between two private citizens. But in the case of civil asset forfeiture, the dispute is between the cops and a thing – cash … gold … a house … or a nice new yacht – they suspect has been involved in a crime.

No due process is needed. The owners of the disputed items are guilty until proven innocent. Often, of course, the supposedly “ill-gotten gains” are not ill-gotten at all – until the cops get their hands on them. All over the country – and in Canada, too – police are turning into crooks… taking money that doesn’t belong to them.

In one recent instance, a young man called Joseph Rivers was taking the train from Detroit to California, hoping to start a new music video company. He took with him his life savings – $16,000, in cash.

But the lucre was just too filthy for the DEA to resist. After boarding Rivers’ train at the Albuquerque Amtrak station, searching its passengers, and discovering the cash in his bag, they simply took it from him.

“The agents found nothing in Rivers’ belongings that indicated that he was involved with the drug trade: no drugs, no guns. They didn’t arrest him or charge him with a crime. But they took his cash anyway, every last cent, under the authority of the Justice Department’s civil asset forfeiture program.” 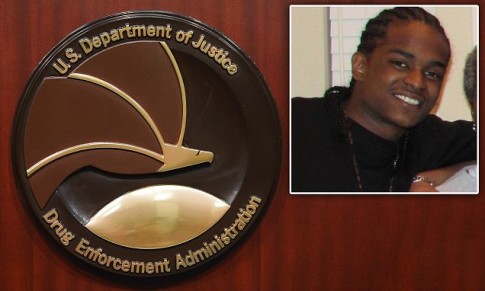 Joseph Rivers had his life saving confiscated on a train, as far as we could ascertain mainly for the crime of being black and because the opportunity presented itself. That the people doing the confiscating work for something called “the department of justice” is more proof that we have well and truly arrived in Orwell’s dystopia.

Once the cops have seized your property, the burden of proof falls on you to get it back – even if the cops never charge you with a crime. “We don’t have to prove that the person is guilty,” an Albuquerque DEA agent told the Washington Post.

In another case, a couple had $118,000 seized from their bank account. Their crime? None. They were merely the targets of money-hungry agents from the U.S. Secret Service because their small business required them to make many cash transactions.

The agents took the money under the civil asset forfeiture rules, which empower government employees to take first and ask questions later. The couple spent years battling to get their money back. By the time the courts finally ordered the feds to hand back the cash, the couple had spent $25,000 on lawyers – money the feds refused to reimburse.

Up next … the ugly. Stay tuned. 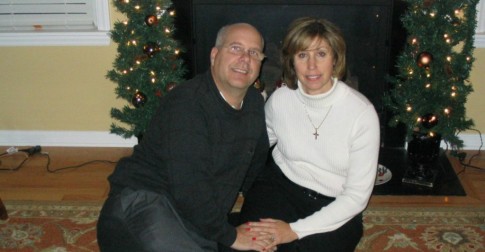 Tom and Marla Bednar of North Carolina, small shop owners who had their money seized although they committed no crime. There are many heart-breaking stories of small business owners getting shafted by assorted government minions abusing civil forfeiture laws. These laws were originally introduced to better combat drug dealers, but have in the meantime mutated into grotesque shake-downs of law-abiding citizens.