It’s over! Starting June 15th and ending September 30th, the Zimbabwe Central bank will begin its process of “demonetization” of the old Zimbabwe Dollar. The Zimbabwe dollar will be removed as legal tender after the currency’s use was abandoned in 2009 following a surge in inflation to 500 billion percent. For bank accounts containing up to 175 quadrillion Zimbabwe dollars they will be paid $5, the country’s central bank said. The people remain angry slamming this as “abusing one’s rights in the banking system,” and claiming this is being done to enrich a chosen few. 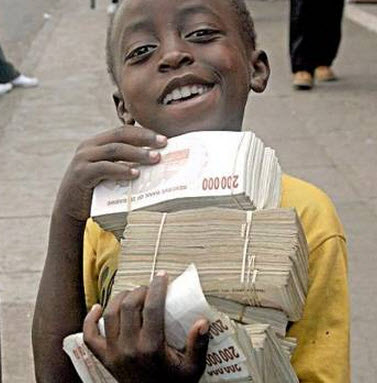 The Zimbabwe dollar will be removed as legal tender after the currency’s use was abandoned in 2009  following a surge in inflation to 500 billion percent.

For bank accounts containing up to 175 quadrillion Zimbabwe dollars they will be paid $5, the country’s central bank said.

A program of seizing white-owned commercial farms for redsistribution to black subsistence farmers that began in 2000 slashed exports and triggered an almost 10-year recession. The economy is half the size it was in 2000, according to government statistics.

The country now uses currencies including the U.S. dollar and the South African rand.

As The Standard reports, Zimbabwe’s Central banker was clear,

Central bank governor John Mangudya has clarified that $5 is the minimum that will be paid to each individual bank account holder as compensation for the Zimdollars people lost when the country switched to the current multi-currency regime in 2009.

Mangudya told The Standard that the full amount people will be compensated for their losses were being worked out using the United Nations exchange rate.

“If we used the UN rate for all accounts some accounts will get zero but we are saying the minimum that everyone will get from the Zimbabwe dollar accounts is $5,” he said.

Mangudya said the central bank was seeing demonetisation as the burying of the local currency.

People are not happy…

“Giving out US$5 does not even show sincerity to correcting an abuse of one’s rights in this banking system — most have described it as a mockery. What is worse, most are already suspecting money set aside for this as a scheme to enrich themselves considering how opaque the whole thing has been.”