What happens in Vegas, stays in Vegas… apart from the water. As the following interactive chart from ProPublica shows, water usage in the greater Las Vegas region has more than doubled in the last 40 years and with the drought conditions, every reservoir is near record lows. Welcome To Las Vegas (while water supplies last). 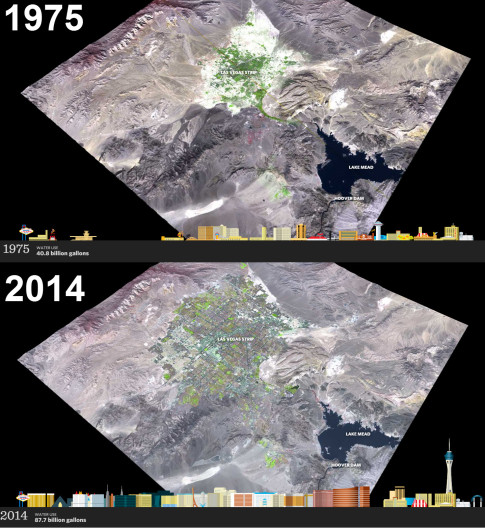 1905    The Las Vegas Land and Water Company is formed to build and operate groundwater wells which the city then depended on for decades.

1928    The Boulder Canyon Project Act authorizes construction of the Hoover Dam and split the water shares up between states. Nevada only gets 97.8 billion gallons, while California is given 1.4 trillion gallons, an imbalance that complicates relations to this day.

1941    A pipeline is constructed by Basic Management Inc., to take water from the Colorado River in Lake Mead and deliver it to Las Vegas for the first time.

1956    Congress passes the Colorado River Storage Project, authorizing the construction of some of the largest dams on the river, including Glen Canyon, Flaming Gorge, New Mexico’s Navajo and Colorado’s Aspinall Unit.

1963    Supreme Court settles Arizona vs. California, deciding a key aspect of Western water law and allowing Arizona, Nevada and California to withdraw unlimited water from their tributary rivers without counting it against their share of the Colorado River, further straining the system’s supply.

1971    The first phase of construction on the Southern Nevada Water System is completed, enhancing Las Vegas’ reliance on the Colorado River for its water.

1992    The Water Authority gets permission from the U.S. Secretary of Interior to temporarily use extra water from the river, which for a few years flowed with more water than the states had divided up.

1994    Nevada’s state engineer allows the Water Authority to take additional water from the Virgin River, water which would have otherwise flowed into Lake Mead.

1998    The Southern Nevada Public Lands Management Act is passed, giving Nevada a say in how federal lands are sold and allowing Las Vegas to rapidly expand. The Water Authority gets a 10 percent stake in land sales, tying its revenues directly to growth.

2001    A year into the start of the drought, California, Nevada and Arizona agree to divide up surplus water from the Colorado River.

2002    The Water Authority completes a $2.1 billion tunnel to double the amount of water it can take from Lake Mead. That same year, drought ravages the basin. The Colorado flows at 25 percent of normal. Pat Mulroy throws out her 50-year water plan.

2005    SNWA decides to build a third, lower intake tunnel from Lake Mead to ensure it can, as Mulroy said recently, “take the last drop” when water levels fall.

2007    As drought drags on, the Colorado River basin states reach an agreement to divide water shortfalls between them in case water levels in Lake Mead drop below 1,075 feet, a trigger that signals a water emergency.

2012    The United States reaches an agreement with Mexico, which has long been entitled to nearly 489 billion gallons from the river, to allow Mexico to store some of its water for future use in Lake Mead. That same year the U.S. Bureau of Land Management comes out in support of the Water Authority’s proposal to build a water pipeline from rural Nevada to Las Vegas.

2014    Pat Mulroy retires after 26 years as Las Vegas’ top water official and having added significantly more water to the city’s annual supply. But the city is in its 15th year of drought, and the Water Authority projects its water demand will continue to rise beyond what the city is currently capable of providing.