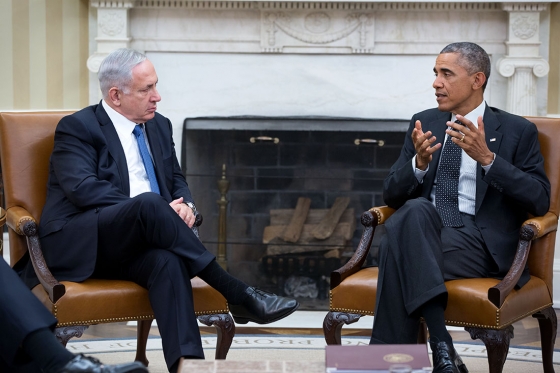 President Barack Obama holds a bilateral meeting with Prime Minister Benjamin Netanyahu of Israel in the Oval Office, Oct 1, 2014. The meeting was described as chilly, reflecting the strained relationship between the two leaders. (Official White House Photo by Pete Souza)

Facing growing condemnation for anti-Palestinian racism, Israel has gone from accusing its critics of anti-Semitism to exploring ways to criminalize a boycott movement intended to create a real democracy for Jews and Arabs, writes Lawrence Davidson.

From the 1920s on into the 1990s, the Zionists controlled the storyline in the West on the Israel-Palestine conflict. This meant that their version of history was the only version as far as most of the people in the West were concerned.

Consequentially, they had an uncontested media field to label the Palestinians and their supporters as “terrorists” – the charge of anti-Semitism was not yet widely used. Also, as a consequence of their monopoly, the Zionists did not bother to engage in public debate.

Then, over the last 20 years the Zionists slowly lost their monopoly. In part this was due to the fact that in 1993 the PLO recognized Israel’s right to exist and renounced terrorism, and in the following years many of the Arab states made or offered peace. However, the Israelis did not respond in kind. In particular they failed to respond in a fair and just way to U.S.-sponsored peace efforts. Why so?

The answer to why the Israelis did not, in good faith, take up multiple historic opportunities to make peace with the Palestinians lies in the very nature of the Zionist movement. From its beginning, and certainly from the establishment of the State of Israel, Zionism has been driven by dreams of colonial expansion and religious exclusiveness.

Each of these goals is seen as part of Zionism’s God-given mission, and they still prevail.

Professor David Schulman of Hebrew University, writing in the New York Review of Books (April 23, 2015), describes the consequences of this situation, “the Israeli electorate is still dominated by hyper-nationalist, in some cases proto-fascist, figures. It is no way inclined to make peace. It has given a clear mandate for policies … that will further deepen Israel’s colonial venture.”

As a consequence, Israel’s credibility with an increasing number of people in the West has eroded. This erosion led to a relatively short period of time in the early 2000s when the Zionists attempted to counter the situation by engaging with their critics in public debate. However, the majority of time they lost.

Israel’s barbarous behavior on the ground, combined with the fact that their historical version of events was shown to be full of holes, condemned them to an increasingly weak defensive position. This proved to be intolerable to the Zionists, so they withdrew from the debating field.

And, as they did, they began to level charges of anti-Semitism against their critics, even those who are Jewish. These accusations of the worst sort of racism have been with us ever since – which is really ironic because much of what Israel is being criticized for is its own racist, apartheid nature.

This was an important change in tactics for Israel because it opened the way to misusing Western laws to Israel’s advantage. Just as the charge of terrorism has often been misused in a broad and sweeping manner (for instance, leveled against non-violent supporters of Palestinian charitable organizations), so the charge of anti-Semitism can potentially be used in an almost unlimited fashion by over-aggressive, pro-Zionist Western prosecutors against any critic of Israeli behavior.

In the West, much of the organized criticism of Israel now comes from campaigns aimed at promoting Boycott, Divestment, and Sanctions (BDS) of the Zionist state.

So robust has the BDS movement grown that Gilad Erdan, Israel’s newly appointed Minister of Public Security, Strategic Affairs, and Public Diplomacy, has described it as one of the most “urgent issues” facing Israel. Israel’s president, Reuven Rivlin, has described the developing academic boycott, just one part of BDS, as a “strategic threat of the first order.”

Israel’s prime minister, Benjamin Netanyahu, has taken it upon himself to set the tone of Israel’s counter-attack on BDS. He has declared that there is an “international campaign to blacken Israel’s name” and he alleges that it is not motivated by Israel’s policies toward the Palestinians but rather seeks to “delegitimize Israel … and deny our very right to live here.”

In other words, he is claiming that present criticism of Israel is really an attack on its existence, and not on its behavior. For Netanyahu this has to be a form of anti-Semitism.

As Hanan Ashrawi, a member of the PLO executive committee, describes Netanyahu’s argument, “If you criticize me you are anti-Semitic. … If you accept any kind of punitive measure or sanctions against Israel, you want to destroy Israel.” That is how the prime minister avoids confronting the facts.

As bad as this is, it gets even worse. Declaring the goal of BDS to be the elimination of Israel allows the Zionists to use their influence with Western legislators to make cooperation with the boycott subject to penalties.

In the United States, AIPAC, the most powerful of the Zionist lobbies, is working on legislation similar to that used against Iran and also the Arab boycott of Israel in the 1970s. This legislation would penalize businesses, both at home and abroad, that favorably respond to calls for boycott.

If this works we can expect the Zionists to go further and try to subvert the U.S. Constitution’s free speech provisions and then go after individuals as well as businesses. In this regard, efforts are also under way in Canada and France.

Finally, there is the assumption that money can destroy Israel’s critics. This is a special belief of Sheldon Adelson, the billionaire casino magnate and enthusiastic backer of Netanyahu.

Adelson has taken aim at activity critical of Israel on U.S. college campuses. In the first week of June 2015, he and his supporters convened a “Campus Maccabees Summit,” the purpose of which was “to develop the conceptual framework for the anti-BDS action plan [on college campuses], assign roles and responsibilities to pro-Israel organizations, and create the appropriate command-and-control system to implement it.”

Fifty activist Zionist organizations attended the conference, as did 20 donors, each of whom pledged $1 million to the cause over the next two years.

Prime Minister Netanyahu personifies the problem with Zionist thinking. He is wholly self-centered and seemingly incapable of recognizing, much less taking responsibility for, Israel’s racist behavior. Thus, with the Zionists having spent the last 100 years planning and then actually doing what was needed to deny as many non-Jews as possible the “very right to live in” Palestine, Netanyahu now accuses others of doing the same thing to him and his kin – and labels it a criminal act.

The truth is that most Western critics, including supporters of BDS, are not trying to kick the Jews out of Israel. They are trying to bring maximum pressure on the Israeli government to stop kicking non-Jews out, to stop territorial expansion in violation of international law, and to start acting like the democratic state it so questionably claims to be.

Speaking strictly for myself, I don’t believe any of these goals are possible unless Zionism is in fact kicked out of what is now Israel. That is, the ideology that drives Israeli racism and colonial expansion must be done away with, in the same way that apartheid was brought down in South Africa. That did not result in South Africa being destroyed or all white South Africans being deported. But it did result in a democracy being imported. The same scenario is necessary for Israel.

No doubt many Israelis and their supporters would equate this goal of extirpating Zionism with promoting another Holocaust. This is not so, but they are scared enough to label the effort of bringing a real democracy to Israel as anti-Semitic, and to try to get it declared it illegal in the West.

Finally, besides the public outcry over anti-Semitism, the Zionists are working behind closed doors – the closed doors of American state and federal legislatures and university board rooms – where they do not have to face serious debate. This might prove the most dangerous of their maneuvers.  For behind closed doors the Zionist monopoly resurfaces and truth is all the easier to suppress.

Lawrence Davidson is a history professor at West Chester University in Pennsylvania. He is the author of Foreign Policy Inc.: Privatizing America’s National Interest; America’s Palestine: Popular and Official Perceptions from Balfour to Israeli Statehood; and Islamic Fundamentalism.