After the clip of white cops rampaging through an affluent Texas neighborhood teenage pool party went viral, the outcry at the actions of the police officers is growing louder as, it appears, AmeriKKKa (as one protester’s banner exclaims) is waking up to what can be done. 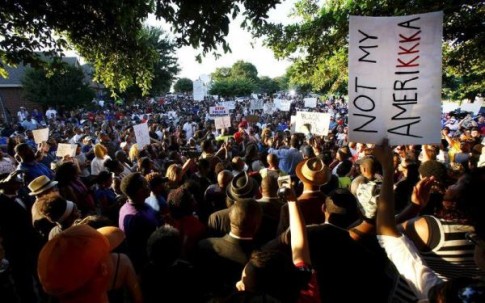 As Reuters reports, hundreds marched through the Dallas-area city of McKinney on Monday calling for the firing of the police officer seen in a video throwing a bikini-clad teenage girl to the ground and pointing his pistol at other youths.

Corporal Eric Casebolt, who is white, has been placed on administrative leave pending an investigation of how he responded to the disturbance on Friday which has raised fresh questions about racial bias in U.S. policing. “Him getting fired isn’t enough,” said one protester, adding at that “he should be charged with assault.”

About 800 people took part in the peaceful rally, carrying signs demanding an end to police brutality and calling for police accountability.

“We are demanding that the officer be fired and be charged with assaulting the youth,” said Dominique Alexander, the president of the Next Generation Action Network, which helped organize the rally.

The incident comes after a string of cases over the past year fueled waves of protests across the United States over what civil rights activists say is law enforcement’s unjustified use of force, often lethal, against minority groups.

Casebolt, a 10-year veteran once named the department’s patrolman of the year, was questioned by authorities on Monday. He has not spoken publicly about the incident.

At the start of the video, one officer cordially tells some teens: “Don’t take off running as soon as cops get here.”

Dajerria Becton, the 15-year-old girl thrown to the ground by Casebolt, told broadcaster KDFW the officer twisted her arm and grabbed her by the hair.

“Him getting fired isn’t enough,” she said.