Greece has very little in the way of bargaining power with European creditors.

Outside of gimmicks like tapping its SDR reserves, Athens has no cash to make payments to the IMF in June and, perhaps more importantly, there’s very little in the way of wiggle room when one looks at revenues versus spending (see below), meaning Greece will also struggle to pay public sector employees which, in combination with Greeks’ consternation about the safety of their deposits, could contribute to social unrest and put unwelcome political pressure on PM Alexis Tsipras and his Syriza party that swept to power just five months ago on a defiant (and apparently naive) anti-austerity platform. 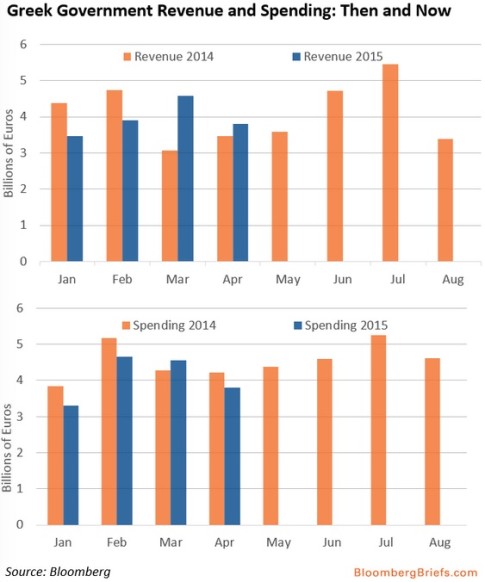 The troika (and Germany) knows this of course and they are also acutely aware that Spain’s Podemos and Portugal’s Socialists are watching the Greek drama closely for the slightest indication of concessions from the IMF or from the EU. In other words, the standoff is now just as much about politics as it is about economics, and the ‘institutions’ do not want any Syriza sympathizers to be able to say that Greece made anyone blink by threatening an exit from the currency bloc.

What all of the above means is that for better or worse, Greece has essentially no leverage because for many European officials, trading austerity concessions for the right to maintain the idea of euro indissolubility is no longer a desirable outcome as it could embolden anti-austerity governments in larger, more influential countries.

All of that said, Greece still has one card to play: the so-called ‘Russian pivot’. Over the course of negotiations between Syriza and the troika Moscow has, at various times, sought to take advantage of the hostilities between Athens and Brussels by making a series of overtures including the possibility of a €5 billion advance on Greece’s portion of the Turkish Stream natural gas pipeline and an invitation for the country to join the BRICS bank, a possibility Goldman’s Jim O’Neill wrote off as a politically-motivated “joke.”

But Vladimir Putin isn’t fond of joking (unless he’s participating in his yearly town hall meeting with the Russian people) and sure enough, less than two months ahead of this year’s BRICS Summit in Ulfa, it appears Greece may accept Moscow’s invite.

Greece is preparing and will probably submit a request to participate in the new development bank for BRICS countries and has secured Russia’s support on the issue, Productive Reconstruction, Environment and Energy Minister Panagiotis Lafazanis told ANA-MPA news agency on Friday evening.

“During my meeting with Russian Deputy Finance Minister Sergey Storchak, we secured the decisive Russian support to Greece’s request for participation in the new development bank of BRICS countries. The relevant request for Greece’s participation…will be symbolic and will be paid in installments, while right after operations begin, it will be able to accept financial support,” the minister said.

Lafazanis added that technical details were also discussed on how to submit the request so that it will be accepted after discussions within the Greek government conclude.

He also noted that he also discussed the credit facility that will be provided by Russian banks to the Greek company which will undertake the construction of the new gas pipeline which will cross Greece.

“Repayment of the Russian loan will be achieved by the profits made through the operation of the pipeline and this facility is not related to loans or economic assistance between states,” he said.

As mentioned above, this comes as Russia, Brazil, India, China, and South Africa are set to officially launch the BRICS bank and a related reserve pool when the group of emerging powers convenes on July 8-9 in Russia. It also comes as Moscow looks set to put plans for a Eurasian currency bloc into motion and as the Central Bank of Russia explores the possibility of establishing a BRICS-associated alternative to SWIFT.

Additionally, China’s recent $50 billion commitment to Brazil underscores the degree to which BRICS nations are expanding their economic and political cooperation in the face of declining Western hegemony. The BRICS bank speaks to the idea that the world’s most influential emerging markets now feel it necessary to support each other in the face of what they view as a half-hearted attempt on the part of the world’s existing multilateral institutions to serve EM interests or even to give them representation that’s comparable to their place in the world economy. Here’s what we said on Friday:

Much like the China-led AIIB, the BRICS bank is in many ways a response to the failure of US-dominated multilateral institutions to meet the needs of modernity and offer representation that’s commensurate with the economic clout of its members.

Why would Russia want Greece to join the bank? The motivation is clearly geopolitical consdering that Greece is broke, and what’s interesting about the statement from Lafazanis is that it appears to suggest that Greece’s paid in capital would come in installments while Athens would immediately be eligible for a loan from the bank.

In short, Putin would like nothing better than to establish a symbolic relationship with the first country to break from the supposedly indissoluble currency bloc, especially given the situation in Ukraine. Meanwhile, Greece is out of leverage, especially now that recent regional and municipal elections in Spain have proven to Athens’ EU creditors that the austerity (or, ‘fauxterity‘ as we’re fond of calling it) revolt is very real. We’ll see what, if any, impact this latest Russian pivot trial balloon has on Greek debt deal negotiations.