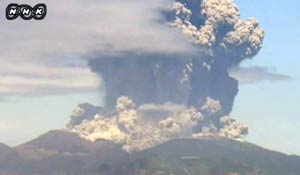 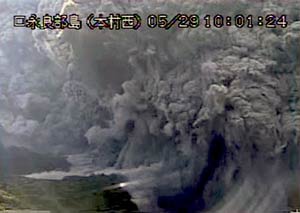 NBC News (emphasis added): Volcano Violently Erupts… in a towering plume of thick, black smoke almost six miles high and a shower of fiercely hot rock… NHK broadcast a bulletin showing smoke billowing over Mount Shindake, which the Japanese Meteorological Agency said erupted violently… Sadayuki Kitagawa, director of the Meteorological Agency’s volcanology division, characterized the eruption as one of “explosive power,” with a smoke plume rising 9,000 meters, or almost 30,000 feet, from the crater… He said the alert level of 5, the highest on the scale, was being maintained because more powerful eruptions are possible.

USA Today: A violent volcanic eruption in southern Japan forces scores of people to evacuate and shoots a huge column of ash high into the air… in spectacular fashion… The Japan Meterological Agency raised the volcano alert level to five, the highest on its scale.

Reuters: [Residents] described a smell of sulfur and clouds of smoke that blacked out the sky. Ash blanketed lower slopes and fell like snow on Yakushima, 12 km (7 miles) to the east… Smoke shot more than 9,000 meters (29,000 feet) into the sky and officials warned of more big eruptions and urged “extreme caution”… It was not clear if the eruption would affect the restart of Kyushu Electric Power’s Sendai nuclear plant, which on Wednesday cleared the last of the nuclear regulator’s safety hurdles… Mount Shindake was dormant for 34 years until last year. Japan is one of the world’s most seismically active countries and there has been an upsurge in volcanic activity in recent weeks, which volcanologists said may be linked to the big 2011 earthquake.

Yomiuri Shimbun: Massive eruption on Kuchinoerabu… The agency raised the volcanic alert… to Level 5… This is the first time for the agency to issue the highest-level warning since the current alert system was introduced in 2007… On May 23, the agency detected a volcanic earthquake [but] found no significant developments in observation data, the official said. “There were no signs of this eruption”

Yomiuri Shimbun: Expert: Possibility eruption was magmatic… the direct ejection of magma… Setsuya Nakada, a professor at the University of Tokyo’s Volcano Research Center, said Friday’s eruption appeared to be magmatic after observing the height of its volcanic column and the way its pyroclastic flows had been generated.

AP: A volcano erupted in spectacular fashion… spewing out rocks and sending black clouds of ash 9 kilometers (5.6 miles) into the sky… The agency raised the alert level… to five, the highest on its scale… The eruption [of Mount Ontake] last September… killed 57 people. Setsuya Nakada [said this] eruption on Kuchinoerabu was stronger than Mount Ontake’s.

Nakada: “This sort of activity has continued [since 3/11]… Probably the eruptions will continue.”

Prof. Ryusuke Imura, specialist in volcanic geology at Kagoshima Univ.: “I don’t think this is finished. The activity could continue and we could see another, more powerful eruption.”