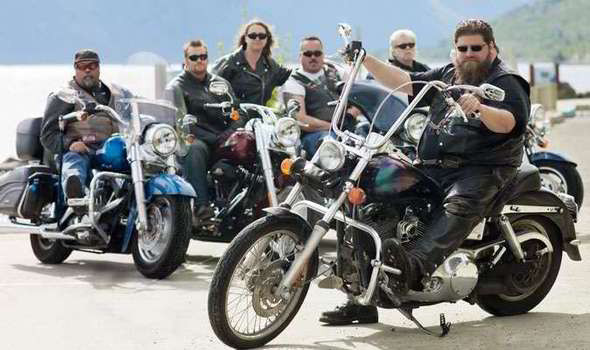 On Thursday evening we outlined what we called the “pension ponzi”, whereby state and local governments resort to the issuance of pension obligation bonds to plug underfunded pension liabilities. The idea is to arbitrage the spread between coupon payments and what the pension funds can presumably expect to make by investing the proceeds from the bond issue. Here’s a refresher:

Much like transferring a balance on a high interest credit card onto a new card with a teaser rate, this gimmick only works if you do not max out the original card again, because if you do, all you’ve done is doubled your debt burden. As it relates to pension liabilities, this means that what you absolutely cannot do is use the cash infusion as an excuse to get lax when it comes to pension funding because after all, that’s what caused the problem in the first place.

Aside from the rather obvious fact that borrowing huge sums of money to paper over problems has a tendency to promote the very same type of irresponsible behavior that got the borrower into trouble in the first place thus setting the stage for a scenario that ends up being twice as bad as it was initially, there’s also the fact that, as documented in these pages extensively, investment return assumptions for public pension plans are often at odds with reality. That is, projecting a 7% return in a world governed by ZIRP and NIRP means that in the best case scenario you are being absurdly optimistic and in a worst case scenario you’re likely taking greater risks in an effort to maximize returns.

The reason why officials are resorting to pension obligation bonds is that state and local governments in the US are finding themselves mired in fiscal crises, some of which are the result of poor policy decisions and others stem primarily from exogenous factors such as slumping oil prices. Compounding the problem was an Illinois Supreme Court decision which struck down a pension reform bid. That effectively set a legal precedent and left states and municipalities with fewer options when it comes to closing funding gaps.

We’ve covered all of this extensively and we thought we had likely seen it all when it comes to excuses for state and local budget gaps but in fact we have discovered yet another way for local governments to find themselves fiscally challenged: “true biker shootouts.”

The now infamous biker breastaurant shootout that unfolded two Sundays ago in the parking lot of a Waco, Texas Twin Peaks Sports Bar And Grill led to the arrest of more than 170 bikers and as you might imagine, that type of influx into the prison and legal system doesn’t come cheap. Here’s The Waco Tribune-Herald with more:

As lawyers threaten civil rights lawsuits, seek bond reductions and clamor that their biker clients have done nothing wrong, McLennan County is spending $7,958 a day to house those jailed in the May 17 Twin Peaks shootout.

According to county records, 173 of the 175 people who were arrested in the wake of the deadly brawl, which left nine dead and 18 wounded, remain jailed. Two bonded out with ankle monitors.

The mass arrests are presenting unprecedented challenges to the county’s criminal justice system and have McLennan County officials keeping a close eye on the potential devastating budgetary fallout from the incident. A week and a half after the shooting, the county has spent upward of $80,000 just to house the inmates.

“We’ve never had an issue of this magnitude, but another thing is all the other business here at the courthouse is still going on,” said 19th State District Judge Ralph Strother, the county’s senior judge who presides over one of McLennan County’s two primary felony courts.

It’s not just the cost of jailing the bikers that’s taking a toll, but the cost of litigation as at least 63 bikers have requested court-appointed attorneys:

Cathy Edwards, the county’s indigent defense coordinator, said of the 175 bikers at the county jail she interviewed, 63 have requested court-appointed attorneys. Edwards said she appointed 14 attorneys Wednesday to represent the bikers, including attorneys from Waco, Corsicana, Temple and Copperas Cove…

Court-appointed defense attorneys are paid $750 for a guilty plea in a first-degree felony case, $500 for a second-degree felony and $400 for third-degree and state jail felonies. They are paid the same fee if cases are dismissed.

If they itemize their time and prefer to be paid hourly, they are paid $75 for out-of-court preparation and $80 an hour while in court.

With the influx of new cases, county officials are keeping a close eye on how the cases are affecting budgets.

And although officials believe the current budget can withstand the pressure, country commissioner Ben Perry admits that “adjustments” may be necessary:

Stan Chambers, the McLennan County auditor, said if many of the bikers are released in coming days or weeks, the current county budget should be sufficient to handle the increased costs

“The commissioners court obviously has to support the decisions that law enforcement and the district attorney’s office make, and any adjustments that need to be made to the budget, we will do so,” Perry said.

So, in a hilariously absurd twist of fiscal fate, we can now add “incarcerated bikers” to the list of things which are imperiling state and local government finances in America.

It should also be noted that this serves to validate an important point we made earlier this month. Namely, that when it comes to true biker shootouts, accurately assessing the fallout ahead of time is virtually impossible.