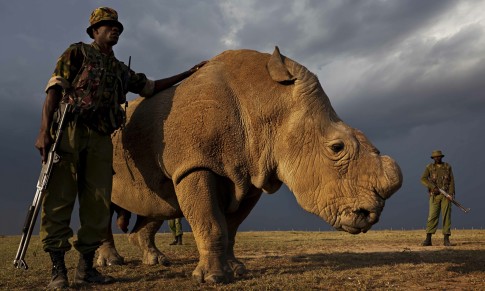 ‘Sudan doesn’t know how precious he is. His eye is a sad black dot in his massive wrinkled face as he wanders the reserve with his guards.’ Photograph: CB2/ZOB/Brent Stirton/National Geographic

– A picture of loneliness: you are looking at the last male northern white rhino (Guardian, May 12, 2015):

What is it like to look at the very last of something? To contemplate the passing of a unique wonder that will soon vanish from the face of the earth? You are seeing it. Sudan is the last male northern white rhino on the planet. If he does not mate successfully soon with one of two female northern white rhinos at Ol Pejeta conservancy, there will be no more of their kind, male or female, born anywhere. And it seems a slim chance, as Sudan is getting old at 42 and breeding efforts have so far failed. Apart from these three animals there are only two other northern white rhinos in the world, both in zoos, both female.

It seems an image of human tenderness that Sudan is lovingly guarded by armed men who stand vigilantly and caringly with him. But of course it is an image of brutality. Even at this last desperate stage in the fate of the northern white rhino, Sudan is under threat from poachers who kill rhinos and hack off their horns to sell them on the Asian medicine market – despite the fact that he has had his horn cut off to deter them.

Sudan doesn’t know how precious he is. His eye is a sad black dot in his massive wrinkled face as he wanders the reserve with his guards. His head is a marvellous thing. It is a majestic rectangle of strong bone and leathery flesh, a head that expresses pure strength. How terrible that such a mighty head can in reality be so vulnerable. It is lowered melancholically beneath the sinister sky, as if weighed down by fate. This is the noble head of an old warrior, his armour battered, his appetite for struggle fading.

Under his immense looming shoulder, his legs protrude like squat columns from the tough tank of his body. The way his foreleg emerges from his thick coat of skin reminds us how long human beings have been wondering at the natural spectacle that is the rhino. For Sudan does not look so different from the rhinoceros that Albrecht Dürer portrayed in 1515. They have the same little legs stuck out of a majestic body and they even lower their heads in the same contemplative way. Dürer was a Renaissance artist picturing an exotic beast from the exotic lands that Europe was starting to see more and more of. In 1515 a live Indian rhinoceros was sent by the ruler of Gujarat to the king of Portugal: he in turn sent it to the Pope, but on the way it died in a shipwreck.

Human beings – we always kill the things we love. We have been doing so since the ice age. There are beautiful pictures of European woolly rhinos in caves in France, that were painted up to 30,000 years ago. These ancient relatives of Sudan share his heroic bulk, mighty power and paradoxical air of gentleness. A woolly rhino in Chauvet cave seems agile and young, a creature full of life. But the same people who painted such sensitive portraits of ice age rhinos helped to kill them off. As climate turned against the woolly megafauna with the end of the last ice age, human spears probably delivered the coup de grace.

Today, immense love is invested in rhinos, yet they are being slaughtered in ever greater numbers. The northern white rhino is the rarest species of African rhino. There are far greater numbers of southern white rhinos and black rhinos. But the demand in Asian countries such as Vietnam for rhino horn as a traditional medicine believed to cure everything from flu to cancer is fuelling a boom in poaching. From 2007, when just 13 rhinos were killed by poachers in South Africa, the killings have grown horrifically. Last year 1,215 rhinos were slaughtered for their horns in South Africa. This year already looks certain to beat that dreadful record.

This is a photograph from the front line of a crisis. The vulnerable northern white rhino has been hunted virtually to extinction – in spite of every precaution, in spite of these guards and their guns – and other varieties of African rhino are under a sustained attack from poachers that is totally out of control. The Javan rhinoceros is also on the verge of extinction. India has successfully protected the Indian rhinoceros after it was almost wiped out by British hunters in colonial times, but here too poaching is a menace. What a majestic creature this picture records, and what futile human destructiveness. Have we learned nothing since the ice age? Can the better angels of our nature not defeat the impulse to kill?

• This article was amended on 14 May 2015 to clarify that Sudan, the rhino under discussion, had his horn cut off to deter poachers.