“Corporate Candidate Clinton sidesteps this issue, too, because she belongs to the top 1%……..not the people. This is one more sign she is the last thing we need.
From the Guardian.”

Could it be any more obvious that the US is not a Republic or democracy but rather an oligarchy of the rich and powerful? A bloodline aristocracy may be a better term, since all of the 44 US Presidents have been part of European royal bloodlines, despite having different last names.

– Hillary Clinton sidesteps trade policy rift between Obama and Democrats (The Guardian, May 6, 2015):

The president and GOP are in rare agreement over successors to Nafta, while some Democrats have doubts. Clinton’s campaign chair just wants it to ‘go away’

Hillary Clinton’s efforts to win over critics on the left – from supporting immigration and campaign finance reform, to gay rights and income equality – have come thick and fast in recent days, but one issue is defying attempts to unify the centrist and progressive wings of the Democratic party ahead of the presidential election.

Trade policy has been a tricky circle to square ever since Bill Clinton enraged labor unions with the North American Free Trade Agreement (Nafta) in 1994. Yet the entry into the 2016 primary race of avowed trade sceptic Bernie Sanders, the leftwing senator from Vermont, all but guarantees her campaign won’t be able to hide from the controversy surrounding Nafta’s Asian and European successors this time.

There are plenty who would like to try. “Can you make it go away?” Clinton’s campaign chairman, John Podesta, was caught joking to donors last month, in private remarks said to refer to anguish among party leaders over the trade promotion authority (TPA) sought by Barack Obama.

In contrast to criminal justice reform and immigration, on which she had made lengthy speeches, Clinton has barely spoken about either TPA or the two future deals this “fast-track” negotiating authority is designed to facilitate: the Trans-Pacific Partnership (TPP) and the Transatlantic Trade and Investment Partnership (Ttip)

“Any trade deal has to produce jobs and raise wages and increase prosperity and protect our security,” Clinton said in response to a question from a reporter during a tour of a New Hampshire furniture factory – a visit in which the issue of the industry’s devastation at the hands of cheap Chinese imports was an elephant in the room.

Sympathisers point to comments from her campaign team that suggest a more sceptical view of the merits of TPP and Ttip than the current president has. “The goal is greater prosperity and security for American families, not trade for trade’s sake,” Clinton’s spokesman, Nick Merrill, said last month.
Advertisement

But the White House and Republicans in Congress – aligned on this issue in a rare instance – claim Clinton as one of their own.

“I haven’t seen anything to suggest any distance,” said Obama spokesman Eric Schultz when asked if they were “on the same page”.

“She can’t sit on the sidelines and let the president swing in the wind here,” added the Republican House speaker, John Boehner, on Sunday.

And union leaders agree that fence-sitting is not a long-term option. “Candidates can’t hedge their bets any longer and expect workers to rush to the polls in excitement, to run out and door-knock and phone-bank and leaflet only to have their candidate of choice turn a back towards the policies,” warned the AFL-CIO president, Richard Trumka.

But the Clinton campaign insists its silence is sensible at this point, arguing the former secretary of state is adopting a wait-and-see approach to the vexed question of whether the merits of greater trade outweigh the harm it might do to US manufacturing jobs.

“I’d say that she has laid out the bar that needs to be met, to protect American workers, raise wages, and create more good jobs at home,” Merrill told the Guardian on Tuesday in response to requests for more specifics.

“So, consistent with what she’s been saying on the issue,” he added, “while this is still being negotiated, she will be watching closely to see what is being done to crack down on currency manipulation, improve labor rights, protect the environment and health, promote transparency, and open new opportunities for our small businesses to export overseas.”

Whether Clinton can afford to temporarily ignore criticism from the left also depends, however, on whether the party’s divisions in Congress can be healed before she faces primary opponents such as Sanders next year.

Opposition to Obama’s trade agreement has been brewing among congressional Democrats, whose concerns include the protection of US jobs, safe conditions for workers, and currency manipulation. Democrats have also criticised the lack of transparency in the negotiating process.

Tension escalated this week when Harry Reid, the Senate minority leader, threatened that Democrats would block “fast-track” trade legislation until the chamber resolved highway funding and the reauthorization of surveillance programs – both of which are set to expire soon. The comments were the latest in a string of aggressive statements Reid has made on the subject, following his declaration last month that his view of giving Obama fast-track authority is “not only no, but hell no”.

Although Reid would not say on Tuesday whether he had the 41 votes necessary to filibuster TPA, he expressed confidence that Democrats were mostly supportive of stopping Republicans from advancing a fast-track bill without also voting on other trade bills that would address some of the concerns with the broader trade pact on both sides.

“We feel strongly enough, enough of us, that we would not allow that to happen,” Reid told reporters on Capitol Hill. “I can’t imagine why the trade bill is so vitally important that it would even trump the Fisa [Foreign Intelligence Surveillance Act] bill … and that it will trump the highway bill. I can’t imagine what the rush is.”

Illinois senator Dick Durbin, the minority whip, said it will ultimately come down to the 10 or 12 Democrats who currently support fast-track. “Those are the key votes,” he said, while adding that he couldn’t yet say if Reid’s gambit would be successful.

“I don’t know the answer to that yet. We’re still talking,” Durbin said.

Republican Kentucky senator Mitch McConnell was unfazed by Democrats’ attempts to halt the process. The Senate majority leader said he will bring up TPA as soon as lawmakers finish work on legislation that would allow Congress to review a nuclear agreement with Iran – which could be as early as next week.

But even McConnell could not definitively say whether the votes were there to break a Democratic-led filibuster of TPA.

“We sure hope so. We’re working it hard,” McConnell told reporters on Tuesday. “It’s been almost an out-of-body experience but we’ve been working closely with the White House. We agree on this and we’re working together to try to get it across the finish line.”

Among the measures passed in committee was one to deal with currency manipulation, which has bipartisan support in the Senate and would crack down on China and other countries that manipulate the value of their currency.

New York senator Chuck Schumer, who is poised to be the next Democratic leader of the Senate, has said Obama’s trade priorities could be seriously compromised if the president were to veto the currency measure.

“I’m not trying to use currency to kill TPA, but I feel very strongly we should get a path to passing it and we’re working on the best way to do that,” Schumer told reporters Tuesday, adding that the goal was not for the provisions “just to be voted on and thrown by the wayside”.

A handful of Republicans are also concerned about currency manipulation, including South Carolina senator Lindsey Graham, who has said he will withhold his support for fast-track if the matter is not addressed.

Incidentally, the Senate was expected to be the easier of the two chambers for the passage of Obama’s trade agenda. That the vote is shaping up to be on a razor’s edge doesn’t bode well for the House, where GOP leaders will likely rely on Democrats to clear the White House-backed legislation.

Last week, House speaker Boehner pointed to broad support for TPA among Republicans but signaled that Democratic votes would be needed for final passage.

“The president needs to step up his game in terms of garnering more support amongst Democrats, especially here in the House,” the Republican leader said.

His argument that Clinton needed to join the president might also be true, but it is advice that many in the party would prefer not to hear right now. 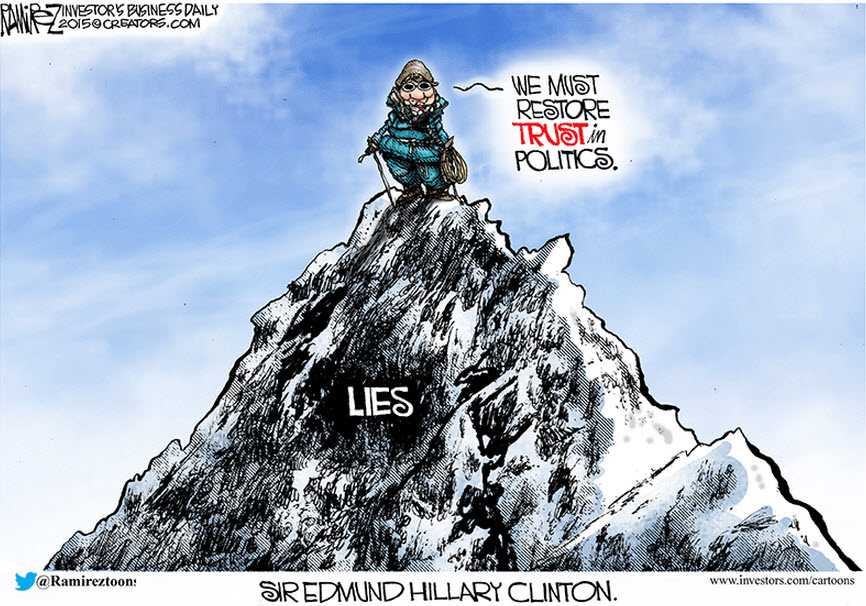