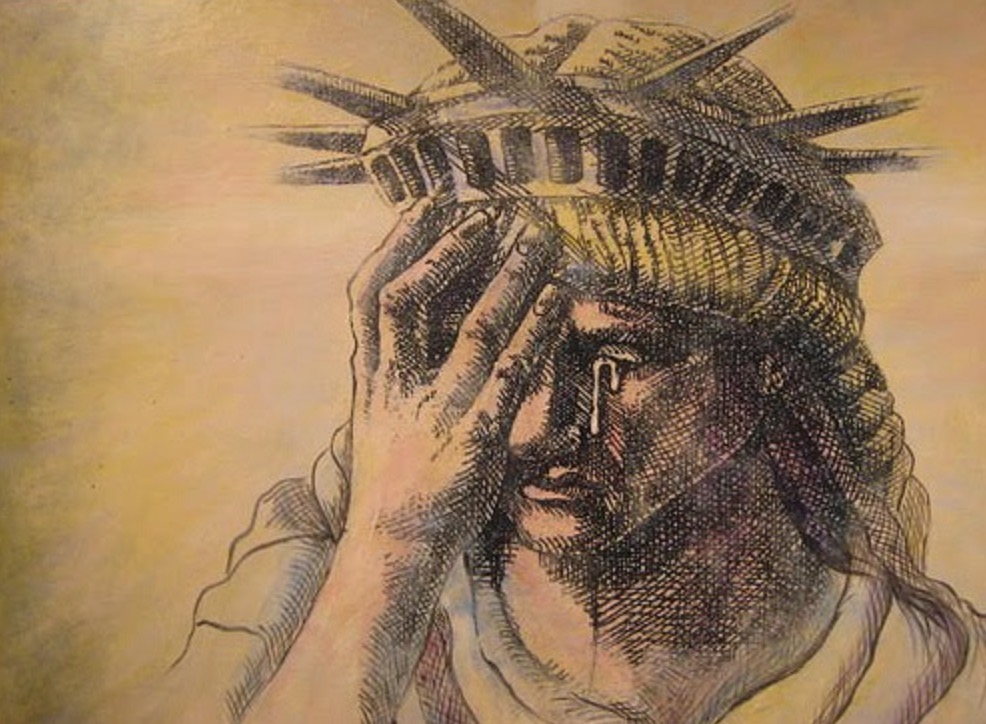 A jury Monday found a couple guilty of having sex on Bradenton Beach after only 15 minutes of deliberation.

The convictions carry a maximum prison sentence of 15 years.

Both Caballero and Alvarez will now have to register as sex offenders.

Ronald Kurpiers, defense attorney for the couple, said his clients were “devastated,” by the verdict.

Though Dafonseca hinted that they’d be speaking with the judge about whether or not 15 years was appropriate for Caballero, Kurpiers said the judge would have no discretion.

“That’s what he’ll get,” Kurpiers said.

– From the Miami Herald article: Couple Found Guilty of Having Sex on Florida Beach

This is what “justice” looks like in the Oligarch States of America. If you’re a pleb who gets caught having consensual sex on the beach, you’re immediately convicted and face up to 15 years in the gulag. Meanwhile, if you’re a banking executive responsible for crashing the global economy, you’re rewarded with trillions in taxpayer bailouts and backstops and given free reign to continue your crime spree. Criminal charges are never considered, despite the extreme negative impact your actions have on society at large, and you’re always given a slap on the wrist via deferred prosecution agreements, or DPAs. Don’t believe me? Let’s look at an excerpt from last year’s post titled, The U.S. Department of Justice Handles Banker Criminals Like Juvenile Offenders…Literally:

These agreements were created 100 years ago to give juvenile defendants and first-time offenders a chance to for rehabilitate themselves. Only in the last 20 years have DPAs migrated to the field of corporate criminals, treating them like kids who’ve just gone down a bad path in life.

The Justice Department is leaning on these toothless agreements more and more. Of the DoJ’s 283 deferred prosecution agreements since 2000, half have come since 2010, Reilly found in a working paper for BYU Law Review.

With that in mind, let’s take a look at what 40-year old Jose Caballero faces in Florida for “sex on the beach.” From the Miami Herald:

A jury Monday found a couple guilty of having sex on Bradenton Beach after only 15 minutes of deliberation.

The convictions carry a maximum prison sentence of 15 years.

Jose Caballero, 40, and Elissa Alvarez, 20, were charged with two counts each of lewd and lascivious behavior for having sex on a public beach on July 20, 2014.

Video played in the courtroom during the 1- 1/2-day-long trial showed Alvarez moving on top of Caballero in a sexual manner in broad daylight. Witnesses testified that a 3-year-old girl saw them.

Both Caballero and Alvarez will now have to register as sex offenders.

The state will ask for jail time for Alvarez and prison time for Caballero. Dafonseca said due to Caballero being out of prison less than three years before committing another felony, he’s looking at serving the maximum time of 15 years.

Ronald Kurpiers, defense attorney for the couple, said his clients were “devastated,” by the verdict. Though Dafonseca hinted that they’d be speaking with the judge about whether or not 15 years was appropriate for Caballero, Kurpiers said the judge would have no discretion.

“That’s what he’ll get,” Kurpiers said.

Ed Brodsky, elected state attorney for the 16th judicial district, joined Defonseca in prosecuting the case. When asked why the case was an important one to the state attorney, Dafonseca said it was important that the community knew what wouldn’t be tolerated on public beaches.

“We’re dealing with basically tourists, that came from Brandon and Riverview and West Virginia, and they’re here on the beaches of Manatee County, our public beaches,” Dafonseca said, referring to the witnesses. “So you want to make sure that this isn’t something that just goes by the wayside. And that it is well known to the community, what will be tolerated and what won’t be.”

So this is where Florida draws the line, how brave! In reality, Florida is known for tolerating and encouraging some of the most statist behavior in America, which is why the state is so often highlighted on this site. Recall:

I could go on, but let’s go back to the Miami Herald.

Family members of the couple defended the two outside the courthouse, saying the crime did not deserve this kind of attention.

“He’s a great person,” said Caballero’s mother of her son, declining to give her name. “There are other things out there we need to worry about, and they’re still loose, people who have done worse stuff.”

This story demonstrates how completely and totally broken the U.S. justice system is. Should this couple have been having sex in public and in broad daylight? Absolutely not. Should there be some sort of punishment? Absolutely.

That said, the punishment should fit the crime in a just civilization, and 15 years behind bars for public sex is more akin to what you’d expect in Saudi Arabia. It’s particularly appalling when compared with the license to commit fraud and steal, which politically connected oligarchs have been granted. After all, who was really harmed by this couple’s act? Sure, some tourists may have had their day temporarily ruined or inconvenienced. A three-year-old girl may have seen something, but would probably have no way of understanding what it was. On the other hand, criminal bankers have demonstrably ruined the lives of hundreds or millions, if not billions, of people across the globe. Yet not a single TBTF executive has been prosecuted. They were bailed out instead.

Meanwhile, what about the pastor who faces only four months for molesting a little girl. Yes, you read that right. Our society is so completely fucked up, that two people irresponsibly making love in public will have their lives ruined, while a religious authority caught molesting a little girl receives a slap on the wrist. From RawStory:

A northern California pastor will serve no more than four months in jail for molesting a 9-year-old girl multiple times.

Venije Singkoh, a pastor at churches in San Francisco and Concord who also held services at his Daly City home, pleaded no contest to a misdemeanor count of child sexual annoyance.

He had initially been charged with three felony counts of child molestation after investigators said he held the girl on his lap and kissing her inappropriately.

The girl told her mother and father that the 70-year-old Singkoh used his tongue while kissing her, and the family called a church meeting to confront the pastor.

Examples of the criminal application of “justice” is an everyday occurrence in America today. I’ve outlined too many examples to list them all, but here are a few:

1 thought on “Florida Man Faces 15 Year Sentence For Sex On A Beach – Still No Banksters In Jail!”