“Corporate Clinton’s role as a potential presidential candidate is taking a big hit, regardless of the mendacious words on US corporate media……” 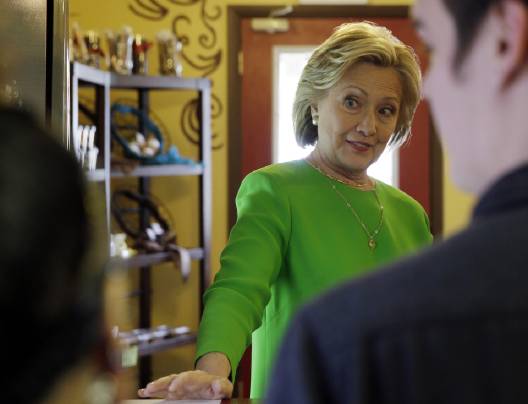 Only 25 percent of registered voters now view Clinton as honest — down from 38 percent who said so in the same poll last year. (AP)

Yet at the same time as her inevitability grows, Clinton’s prestige is starting to wane. The new Wall Street Journal/NBC News poll finds that for the first time since 2008, she no longer enjoys a positive favorability rating. During her time as secretary of state, Clinton’s rating was consistently above 50 percent and at times approached 60 percent. Today, 42 percent of registered voters view her positively and 42 percent negatively.

Much worse, only 25 percent of registered voters now view Clinton as honest — down from 38 percent who said so in the same poll last year. Asked to score her on a scale of one to five, 43 percent rated Clinton’s honesty as a one (the lowest possible) and an additional 7 percent rated her as a 2.

Although the poll was taken in mid-April, one reason for the trend is surely Tuesday’s much-anticipated release of Clinton Cash, Peter Schweizer’s book on how the Clintons’ non-profit organizations and their personal bank balance have intersected with Hillary’s career at the State Department.

Several stories in the book were reported in advance by mainstream media outlets. One case involved the Keystone XL Pipeline. When it was under State Department consideration, pipeline investor TD Bank paid Bill Clinton $1.8 million to give 10 speeches over a two-and-a-half year period.

Clinton Cash is now available, and it contains many other examples that fit the same pattern.

In 2011, telecom company Ericsson was worried that an upcoming State Department crackdown on companies doing business in Iran would ensnare its telecommunications business with Iran’s government. The Swedish company hired Bill Clinton to give a single speech for $750,000. A week later, Schweizer writes, the State Department released guidelines that didn’t affect Ericsson.

Boeing donated $900,000 to the Clinton Foundation right after Clinton’s State Department helped the company secure a contract with the Russian government.

The Clinton Foundation took more than $100 million in donations from companies with interests in mining the Congo, beginning immediately after then-Sen. Clinton’s 2008 presidential campaign. The Clinton State Department would later intervene on behalf of some of these companies.

Sure, some of the incidents could be written off as innocent coincidence. There is not a smoking gun in any one case. Unless you can do impossible things like read minds — or Hillary Clinton’s emails — how can you know what’s in her heart?

But in every single case, the appearance of impropriety is obvious. And there seems to have been no effort whatsoever to avoid major conflicts of interest of the sort that would get most people fired or arrested.

This is why the same Wall Street Journal poll shows that Democratic primary voters are becoming a bit more concerned about the party’s one-woman field for the presidential nomination. The share of Democrats who want to see someone challenge her is now 43 percent, up from 38 percent in March.

Maybe they’re on to something.

2 thoughts on “‘Clinton Cash’ Is Out, And The Polls Show It”