And so the Atlanta Fed, whose “shocking” Q1 GDP prediction Zero Hedge first laid out nearly 2 months ago, with its Q1 GDP 0.1% forecast was spot on. Moments ago the BEA reported that Q1 GDP was far worse than almost everyone had expected, and tumbled from a 2.2% annualized growth rate at the end of 2014 to just 0.2%, in a rerun of last year when it too “snowed” in the winter.  This was well below the Wall Street consensus of a print above 1.0%. 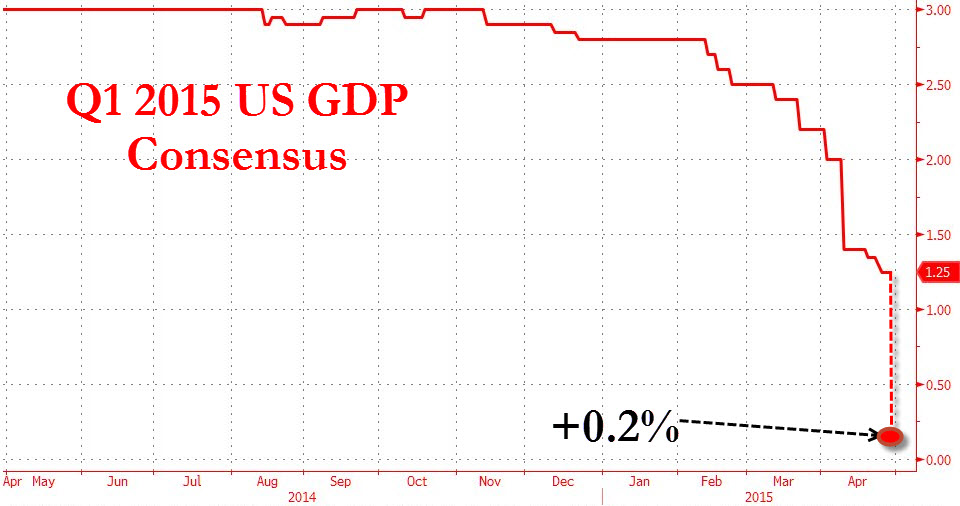 In other words, in the quarter in which the S&P rose to unseen highs, the economy ground to a near halt.

Only this time it wasn’t the snow, as the main reason for the plunge in economic growth was not only personal consumption which was cut by more than 50% from last quarter, tumbling to just 1.31%, but fixed investment, i.e., CapEx, which subtracting 0.40% from the bottom line GDP number, was the lowest print since 2009!

The fact that trade also subtracted a whopping 1.25% from the final number shows that while one can blame the weather for anything, the reality is that in the start of the year global trade did indeed grind to a halt, a picture which is only getting worse with every passing day.

The only good news: the massive inventory build, the largest since 2010, boosted GDP by nearly 3.0%. Without this epic stockpiling of non-farm inventory which will have to be liquidated at some point (and at a very low price) Q1 GDP would have been -2.5%.