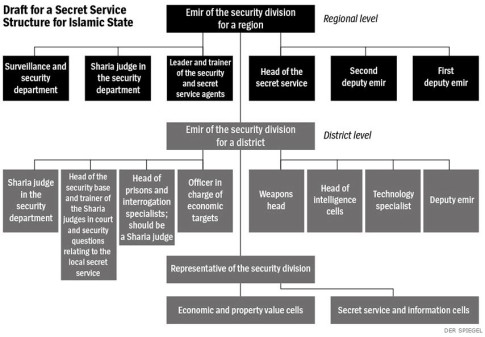 While western propaganda would like ISIS to appear to be run by religious fanaticism, it instead, as RT reports, has been functioning more like a secret intelligence service, calculating every operation and drafting plans of a covert Syrian takeover for years. According to detailed organization chart and strategy blueprints seen by Der Spiegel, it has been revealed that the former colonel in the intelligence service of Saddam Hussein’s air defense force(among many ex-Saddam officers who now make up the leadership of ISIS) was secretly pulling the strings at ISIS for years. From recruitment and training to PsyOps tactics and overall strategy, ISIS mastermind Haji Bakr rose to power after he became “bitter and unemployed,” when the US suddenly dissolved the Iraqi army after the 2003 invasion.

When Haji Bakr was shot and killed after a brief firefight in the town of Tal Rifaat on a January morning in 2014, not even those on the mission knew the true identity of the tall man in his late fifties. Samir Abd Muhammad al-Khlifawi was the real name of the Iraqi, and as Der Spiegel reports, the former colonel in the intelligence service of Saddam Hussein’s air defense force had been secretly pulling the strings at ISIS for years.

But when the architect of the Islamic State died, he left something behind that he had intended to keep strictly confidential: the blueprint for this state. It is a folder full of handwritten organizational charts, lists and schedules, which describe how a country can be gradually subjugated. Der Spiegel has gained exclusive access to the 31 pages, some consisting of several pages pasted together. 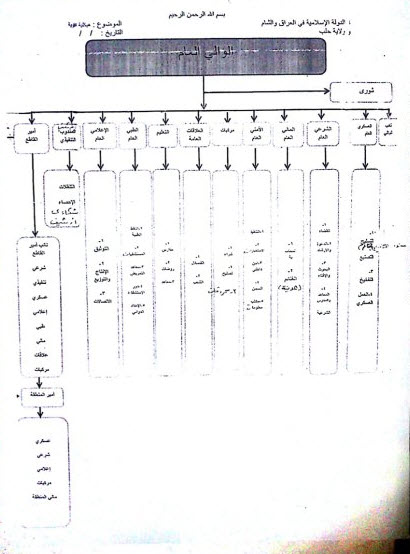 They reveal a multilayered composition and directives for action, some already tested and others newly devised for the anarchical situation in Syria’s rebel-held territories. In a sense, the documents are the source code of the most successful terrorist army in recent history. 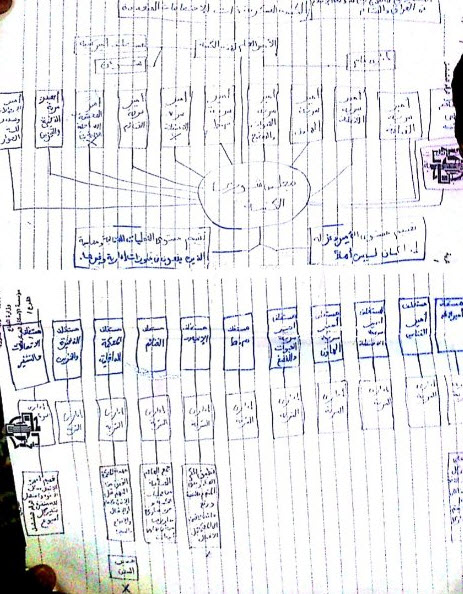 For the first time, the Haji Bakr documents now make it possible to reach conclusions on how the IS leadership is organized and what role former officials in the government of ex-dictator Saddam Hussein play in it. Above all, however, they show how the takeover in northern Syria was planned, making the group’s later advances into Iraq possible in the first place.

“Our greatest concern was that these plans could fall into the wrong hands and would never have become known,” said the man who has been storing Haji Bakr’s notes after pulling them out from under a tall stack of boxes and blankets. The man, fearing the IS death squads, wishes to remain anonymous.

The “Lord of the Shadows,” as some called him, sketched out the structure of the Islamic State, all the way down to the local level, compiled lists relating to the gradual infiltration of villages and determined who would oversee whom. Using a ballpoint pen, he drew the chains of command in the security apparatus on stationery. Though presumably a coincidence, the stationery was from the Syrian Defense Ministry and bore the letterhead of the department in charge of accommodations and furniture.

What Bakr put on paper, page by page, with carefully outlined boxes for individual responsibilities, was nothing less than a blueprint for a takeover. It was not a manifesto of faith, but a technically precise plan for an “Islamic Intelligence State” — a caliphate run by an organization that resembled East Germany’s notorious Stasi domestic intelligence agency.

Page-by-page the documents reveal a sophisticated plan, and as RT reports, not so much for jihad, but for building a caliphate run by cold calculations…

The organizational charts and chains of command drawn by the top strategist reveal a clearly-defined Secret Service structure with surveillance and security departments, prison and interrogation divisions, weapons and technology experts, as well as sharia judges and instructors.

The records, Spiegel reports, contain details of ISIS espionage operations and other intelligence activities to covertly gain power in territories of their interest and make sure no dissent would be possible after an actual armed takeover.

The documents explain how men would initially be recruited by ISIS in target towns and villages via local cells disguised as Islamic missionary centers. The recruits then would report back to ISIS leadership with information on the powerful locals as well as what their sources of income were, people’s political orientation and any other information which could be used to blackmail them later.

“We will appoint the smartest ones as Sharia sheiks… We will train them for a while and then dispatch them,” the ISIS mastermind Haji Bakr, whose real name was Samir Abd Muhammad al-Khlifawi, had noted in one of the papers. “Brothers” would be selected in each town to marry the daughters of the most influential families, in order to “ensure penetration of these families without their knowledge.”

The Islamic State leadership gathered any information useful for dividing and subjugating the local population. As far as Syria was concerned, they used whoever they could and changed allegiances whenever they felt like it, with their informants including former intelligence spies as well as opponents of the regime.

Another phase of the plan included the elimination of any powerful people and potential leaders who could organize the local population against the infiltrators. But in towns where the resistance grown too strong, the publication writes, ISIS temporarily withdrew allowing local Syrian rebels confront the government forces.

The terrorist organization apparently realized most of their plans, and by late 2012 things in Syria were a mess with Pesident Assad’s pushed back while hundreds of local councils and rebel brigades took control of the territory. This anarchic mix was exploited by this tightly-organized group of ex-officers to create the terrorist caliphate that straddles much of Syria and Iraq today.

As we noted previously,ex-Saddam army officers now dominate ISIS leadership. Bakr was a “highly intelligent, firm and an excellent logistician,” as an Iraqi journalist described the former officer. But when the US suddenly dissolved the Iraqi army after the 2003 invasion he became “bitter and unemployed.”

We leave it to RT to conclude, perfectly summing up the lack of strategic thought in US foreign policy:

The reason why ISIS are so successful as a terrorist organization is partly because many of their founding members, including the top strategist, were part of Saddam Hussein’s professional security apparatus. By shattering the well-trained army of Saddam, the US apparently created a group of very intelligent enemies. 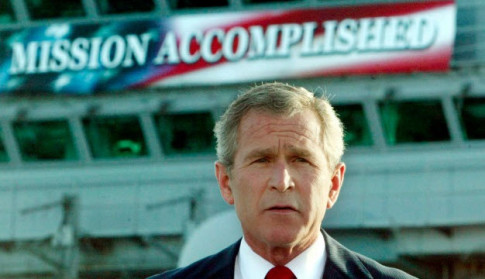