“US getting real competition…..the world is sick of us.” 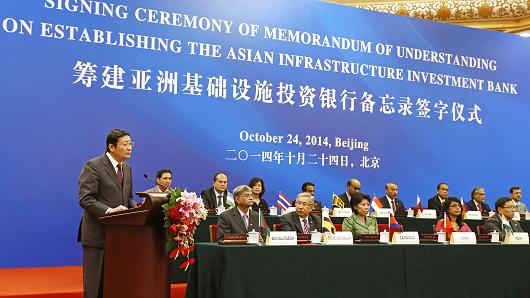 China’s Minister of Finance Lou Jiwei, left, delivers a speech next to other representatives of founding member countries at the signing ceremony establishing the Asian Infrastructure Investment Bank in Beijing, Oct. 24, 2014

China’s big foray into global finance is causing nervousness on Wall Street while helping to exemplify how dysfunctional Washington has become.

The Asia Infrastructure Investment Bank is positioning itself as an Asia-centric alternative to the World Bank and International Monetary Fund, even though the head of the World Bank on Tuesday tried to cast the AIIB as a partner, not a rival.

However, some prominent U.S. voices recently have been expressing alarm both at the AIIB’s growth, and its ability to attract U.S. allies even though the Obama administration has been seeking to discourage membership. The U.S. holds the largest voting bloc in the IMF/World Bank structure, but has not signed on to the China effort.

With the addition of Iran and the United Arab Emirates, the roster of prospective AIIB members has grown to 35, according to the Xinhua News Agency. In addition to multiple Asian countries—Singapore, Sri Lanka and Vietnam to name three—the amount of European countries is on the rise. Germany, France and Italy are on board for when the bank is officially chartered later in the year, and outside the region Australia just joined as a high-profile partner, despite the White House’s wishes.

If the situation is starting to create an outside-looking-in scenario for the U.S., then the country has no one but its policymakers to blame, according to a widely circulated blog post Monday from former White House economic advisor Larry Summers.

“With U.S. commitments unhonored and U.S.-backed policies blocking the kinds of finance other countries want to provide or receive through the existing institutions, the way was clear for China to establish the Asian Infrastructure Investment Bank,” Summers, now a professor at Harvard, wrote.

He added that the creation, and growing membership, of the AIIB, should be seen as a “salutary wake up call” for the U.S. to become a better global citizen when it pertains to economic cooperation.

“This failure of strategy and tactics was a long time coming, and it should lead to a comprehensive review of the U.S. approach to global economics,” he wrote. “With China’s economic size rivaling America’s and emerging markets accounting for at least half of world output, the global economic architecture needs substantial adjustment. Political pressures from all sides in the U.S. have rendered it increasingly dysfunctional.”

White House officials did not immediately respond to a CNBC.com request for comment. Various publications have quoted anonymous administration officials expressing annoyance at the AIIB’s growing membership rolls, particularly at the willingness of allies like Britain to join.

Catherine Novelli, U.S. undersecretary of state for economic growth, energy and the environment, said in a recent CNBC interview that the administration generally supports the AIIB’s stated goals but has concerns over regulation and environmental issues.

“The questions that will remain, and we’re hopeful that this is going to develop over time in this way, are how is governance going to work, because that hasn’t been fully laid out yet, and this whole question of how is this development of infrastructure going to be done in a way that is environmentally sustainable,” Novelli said. “That will also have to be developed over time.”

At its heart, the bank’s mission will be to take a funding level of about $50 billion and use it to develop infrastructure projects in developing economies. With the world’s second-largest economy, China is looking to step to the forefront of helping its neighbors grow and provide outlets for its export-driven base.

However, critics worry that ultimately the institution will help China knock the U.S. off its pedestal as the world’s pre-eminent economic and military superpower, give the dollar competition as the global reserve currency and to change a fundamental dynamic by filling a funding void.

Ian Bremmer, political scientist and president of the Eurasia Group, summarized the dilemma for the U.S. in an analysis posted on the World Economic Forum:

Why is Washington so squeamish? For decades, the U.S. has used its authority in the World Bank and IMF to strengthen relations with European partners and to guide developing countries toward Western values. In Asia, Washington has used its power within the Asian Development Bank toward the same end. These institutions can issue loans with a quid pro quo: to implement reforms in line with the lenders’ preferences. Washington worries that China can do precisely the same thing. With a stake of up to 50 percent, China may dictate the AIIB’s values.

Bremmer suggests that the reason President Barack Obama and the White House are so set against the AIIB is Washington worries that, with a loss of domestic appetite for exercising military might overseas, the only thing left to keep America’s dominant position is economics.

A strong contender to the World Bank/IMF influence could erode the nation’s standing on several fronts, Bremmer wrote:

This leaves Obama, and his successors, with a difficult question: In a world that needs America less, how can Washington protect and maintain its dominant influence?

Banking analyst Dick Bove has joined the chorus of those worried about what the rise of the AIIB might portend.

The vice president of equity research at Rafferty Capital Markets called it “a major defeat for the United States” that, save for Japan, “every other major … ally from Britain to Israel to Australia has joined. These countries joined despite the expressed wish of the United States that they not do so.”

Many analyses of the AIIB’s rise point out the institution’s development came largely because the U.S. helped block reforms to the IMF that would have given China more influence. Bove, too, believes the U.S. is “overplaying” its global influence.

“The result of its actions both internally and externally has been the creation of an entity that can compete with the IMF and World Bank internationally; an entity controlled by a country that is seeking to reduce the United States hold on the world financial markets,” he said in a report for clients. “The creation of the AIIB also demonstrates clearly that not only are the U.S. enemies but also its biggest allies fed up with the United States demands and tactics in the financial world. This is incredibly dangerous to this country’s standing internationally in an area where it counts—finance and the dollar.”

1 thought on “CNBC: ‘Asia Infrastructure Investment Bank GAMBIT Has US On Edge’”