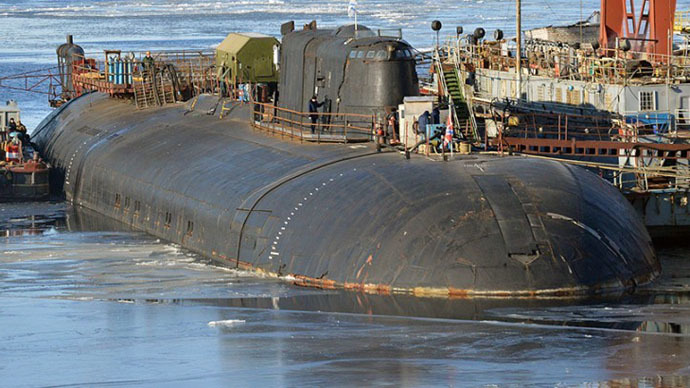 A fire has broken out on a Russian nuclear submarine undergoing repair work at a shipyard in Severodvinsk. The cause of the fire is believed to be related to welding work.

The incident occurred at the Zvezdochka shipyard, in the Arkhangelsk region in northern Russia.

“The fire started in the ninth section of the sub close to the stern,” a spokesman for the shipyard, Evgeny Gladyshev, told RIA Novosti. “All the personnel left the submarine and fire brigades are currently dousing the flames.”

The fire has been localized after firefighters decided to submerge the burning submarine in water to put off the flames.

The United Shipbuilding Company said nobody was hurt in the fire.

The fire broke out onboard the K-266 Oryol, an Oscar II-class nuclear-powered submarine, which is part of Russia’s Northern Fleet. The shipyard is overhauling the sub to prolong its active service, so its nuclear reactor was shut down and its weapons unloaded before the repair works started.

Preliminary reports say the fire was caused by a welding accident, which resulted in the ignition of the rubber insulation between the sub’s two hulls, according to Gladyshev.

The Oryol entered service in December 1992. It was transported to the shipyard in November 2013 for a scheduled overhaul, which is to last until 2016.

A total of 11 such submarines were built. The nuclear sub Kursk that sank in August 2000, killing all submariners aboard, belonged to this class. Two others were decommissioned while the others remain in active service.

A similar fire at a nuclear submarine occurred in Russia in December 2011, when the K-84 Yekaterinburg of Delta-IV class caught fire during welding works at a shipbuilding dock. The fire, which was caused by a violation of safety guidelines, first ignited scaffolding around the sub and later spread to the insulation between its hulls.

The massive fire, which lasted for some 20 hours, left nine people injured after inhaling toxic fumes and caused dozens of millions of dollars worth of damage.