“America continues to be a country where there are only jobs for old men, those 55 and older, who saw a 329,000 increase in jobs in the past month. Every other age group saw job losses!“

– No Country For Young Workers: Only Americans 55 And Older Found Jobs In March (ZeroHedge, April 3, 2015):

We first showed back in October 2012 that in America, courtesy of the Fed’s micro-mismanagement of everything, the labor force has been turned upside down, and the only jobs being created are those for aged workers, Americans 55 and over. The reason is two-fold: with savings rates at zero, Americans who were on the verge of retiring found that the fruit of their labor was worth nothing under ZIRP (and may well be punished under the upcoming NIRP) as their savings (and fixed income investments) generate zero interest income, while young Americans would rather stay in college by the millions funded generously by trillions in Uncle Sam student loans.

In any event, this is nothing short of a recipe for disaster, as aged workers have no leverage to demand higher wages (hence the lack of any broad wage growth), while Millennials and other young Americans, instead of entering the work force and accumulating job skills as well as wages, get more and more in debt.

All of this was on full display in today’s jobs number, which while disappointing wildly based on Establishment survey data, was even worse based on the Household survey where only 34,000 people found jobs in March. But it was the age breakdown that was the stunner, and it can be seen best in the chart below.

In short: America continues to be a country where there are only jobs for old men, those 55 and older, who saw a 329,000 increase in jobs in the past month. Every other age group saw job losses! 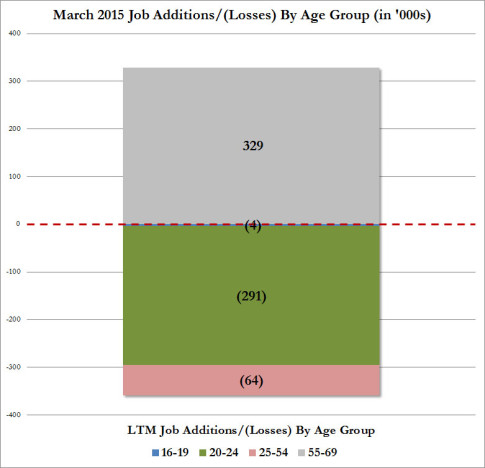 And the real kicker: since the start of the Second Great Depression, only the 55 and older age group has seen job increases. Those 55 and younger are still 1.2 million jobs below the level they were are on December 2007. 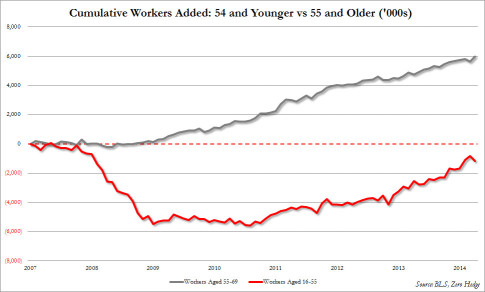 And just in case there is any confusion, here is just the number of workers aged 55 and older. At 33.1 million they just hit a new all time high. 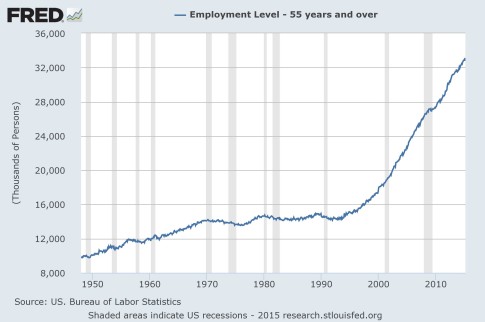 Oh, and finally, for those who may be wondering. It isn’t because of early retirement. Unless of course, those retiring early are workers aged 25 to 54. 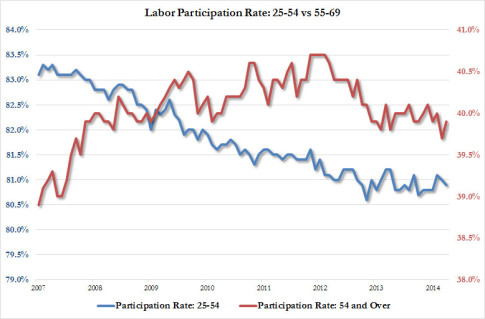