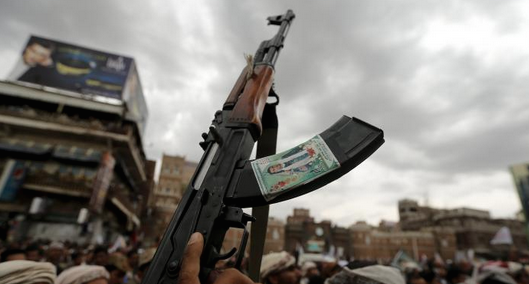 On Tuesday, we suggested that the entry of Houthi rebels into a military base overlooking the Bab el-Mandeb strait may have made a Saudi ground incursion in Yemen virtually inevitable. The 18-mile wide waterway is a critical oil chokepoint and given the potential for the conflict in Yemen to devolve into an all out proxy war between Iran and Saudi Arabia, the possibility that the strait will fall under Iranian influence via the Houthis is seen as untenable. Meanwhile, the Saudi-led coalition continued bombing raids for a sixth consecutive day and predictably, each side is now blaming the other for civilian casualties.

The coalition targeted two Houthi military installations in the city of al-Dhale southwest of Yemen.

In Aden, the strikes were focused on the rebel-held provincial administration complex in Dar Saad in the north of the city,reported AFP citing a military official.

He said there were “many dead and wounded” among the Houthi Shiite rebels but was unable to give a precise toll.

The headquarters of a renegade army brigade loyal to Saleh was targeted overnight in the north of Aden, as well as the city’s international airport, the military official said.

Militia fighters loyal to President Abdrabbu Mansour Hadi have captured 26 Houthis during the fighting in Aden, one of their leaders said.

In the western port city of Hodeida, four civilians were killed and 10 injured when a dairy was hit in the night, said medical sources.

The circumstances of the bombing were unclear, with some witnesses saying the dairy was hit by a coalition air strike and others blaming pro-Saleh forces.

The mounting civilian death toll has prompted the UN to warn that the country is on the verge of “total collapse,” as the nation which President Obama just months ago cited as a success story in the war on terror rapidly devolves into sectarian violence on the way to “failed state” satus.

UN rights chief has said that Yemen is “on the verge of total collapse” as Saudi-led coalition continues to bomb Houthi positions.

“The situation in Yemen is extremely alarming, with dozens of civilians killed over the past four days,” UN High Commissioner for Human Rights Zeid Ra’ad Al Hussein said on Tuesday.

“The country seems to be on the verge of total collapse”.

Aid groups have warned of a humanitarian crisis unfolding with air and sea blockades making it impossible to send desperately needed assistance as casualties mount.

But the spokesman for the Saudi-led coalition said it does not intend to kill civilians even though the Houthis had moved fighters into villages.

“Collateral damage can happen… but I confirm to you that the coalition takes all care,” said Brigadier General Ahmed Assiri.

On Tuesday, air strikes targeted two Houthi-held camps and Guard soldiers in the southern town of Daleh, a Guard airbase in the southwestern city of Taez and the Houthi stronghold of Dhammar, south of Sanaa.

On the ground, deadly clashes have broken out between the rebels and tribes, militiamen and residents who oppose their power grab, the AFP news agency reported.

And even as the Saudis claim their is no immediate need to put boots on the ground, rebel and Saudi forces are now exchanging rocket and artillery fire across the border in what Reuters calls “heavy clashes.” We’ll leave you with the following from the Yemeni foreign minister: