If an independent enquiry deems an invasion such as Iraq, Afghanistan, Yemen, etc ILLEGAL, then victims must be entitled to compensation.” 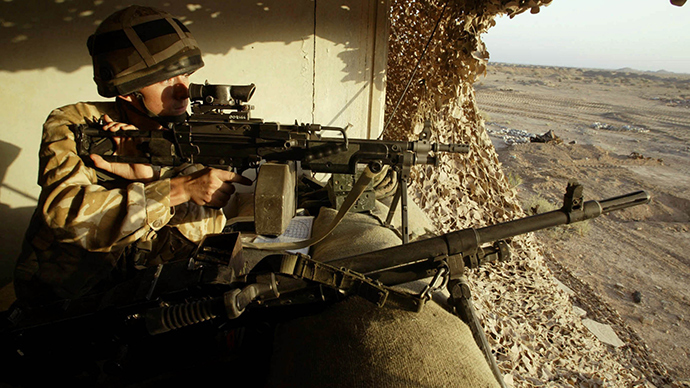 Soldiers will be safe from the “persistent human rights claims” that have dogged the British military for years because the Conservatives will “rip up” human rights legislation if they win the general election, two top Tories have pledged.

Defence Secretary Michael Fallon called for an end to what he called the “abuse” of the Human Rights Act to bring about costly inquiries into the conduct of British soldiers during wartime operations in Iraq and Afghanistan.

He warned that legal claims such as those emerging from the Iraq War had undermined the military’s work and had cost the taxpayer millions of pounds.

Fallon told the Daily Mail: “This abuse has got to stop and the next Tory government will limit the reach of human rights cases to the UK so our forces overseas are not subject to persistent human rights claims.”

Justice Secretary Chris Grayling MP added his voice on Tuesday, telling the Mail: ‘We can’t go on with a situation where our boys are hamstrung by human rights laws … I made it clear last year that I want to rip up Labour’s Human Rights Act and that it is only the Conservatives who will make real changes to the human rights framework to restore some common sense.”

The pledge reflects a broader Tory commitment to remove the UK from the European Convention on Human Rights (ECHR) and instead develop a British Bill of Rights in its place.

It is said this would then govern the actions of UK troops on operations and take proper account of the pressures faced by service personnel in wartime if legal cases arise.

It argued that Britain must scrap the European Convention on Human Rights (ECHR) in times of warfare because British soldiers cannot fight under the restraints of “judicial imperialism.”

Offering enemy combatants the right to sue the British government and expecting soldiers on the battlefield to operate with the same level of caution as police patrolling London streets will render future foreign combat operations unworkable, the report by Policy Exchange said.

The British military establishment has been dogged by inquiries into allegations of human rights abuses on the battlefield perpetrated by UK forces.

Although the Al Sweady investigation into allegations of murder and mutilation of Iraqis by British troops in 2004 found the majority of accusations “completely baseless” in December last year, there are still cases pending.

Last month, the High Court ruled that grieving families of Iraqis gunned down by British soldiers in Iraq may sue Britain’s Ministry of Defence (MoD) for violating international law.

The milestone ruling could pave the way for over 1,200 claims, brought by Iraqi families.