This is one of those sad times when The Onion realizes it has badly, and permanently, missed its IPO window.

Just released from the Department of Justice

Two former federal agents have been charged with wire fraud, money laundering and related offenses for stealing digital currency during their investigation of the Silk Road, an underground black market that allowed users to conduct illegal transactions over the Internet.  The charges are contained in a federal criminal complaint issued on March 25, 2015, in the Northern District of California and unsealed today.

Carl M. Force, 46, of Baltimore, was a Special Agent with the Drug Enforcement Administration (DEA), and Shaun W. Bridges, 32, of Laurel, Maryland, was a Special Agent with the U.S. Secret Service (USSS).  Both were assigned to the Baltimore Silk Road Task Force, which investigated illegal activity in the Silk Road marketplace.  Force served as an undercover agent and was tasked with establishing communications with a target of the investigation, Ross Ulbricht, aka “Dread Pirate Roberts.”  Force is charged with wire fraud, theft of government property, money laundering and conflict of interest.  Bridges is charged with wire fraud and money laundering.

According to the complaint, Force was a DEA agent assigned to investigate the Silk Road marketplace.  During the investigation, Force engaged in certain authorized undercover  operations by, among other things, communicating online with “Dread Pirate Roberts” (Ulbricht), the target of his investigation.  The complaint alleges, however, that Force then, without authority, developed additional online personas and engaged in a broad range of illegal activities calculated to bring him personal financial gain.  In doing so, the complaint alleges, Force used fake online personas, and engaged in complex Bitcoin transactions to steal from the government and the targets of the investigation.  Specifically, Force allegedly solicited and received digital currency as part of the investigation, but failed to report his receipt of the funds, and instead transferred the currency to his personal account.  In one such transaction, Force allegedly sold information about the government’s investigation to the target of the investigation.  The complaint also alleges that Force invested in and worked for a digital currency exchange company while still working for the DEA, and that he directed the company to freeze a customer’s account with no legal basis to do so, then transferred the customer’s funds to his personal account.  Further, Force allegedly sent an unauthorized Justice Department subpoena to an online payment service directing that it unfreeze his personal account.

Bridges allegedly diverted to his personal account over $800,000 in digital currency that he gained control of during the Silk Road investigation.  The complaint alleges that Bridges placed the assets into an account at Mt. Gox, the now-defunct digital currency exchange in Japan.  He then allegedly wired funds into one of his personal investment accounts in the United States mere days before he sought a $2.1 million seizure warrant for Mt. Gox’s accounts.

Bridges self-surrendered today and will appear before Magistrate Judge Maria-Elena James of the Northern District of California at 9:30 a.m. PST this morning.  Force was arrested on Friday, March 27, 2015, in Baltimore and will appear before Magistrate Judge Timothy J. Sullivan of the District of Maryland at 2:30 p.m. EST today.

The charges contained in the complaint are merely accusations, and the defendants are presumed innocent unless and until proven guilty.

The case was investigated by the FBI’s San Francisco Division, the IRS-CI’s San Francisco Division, the Department of Justice Office of the Inspector General and the Department of Homeland Security Office of the Inspector General in Washington D.C.  The Treasury Department’s Financial Crimes Enforcement Network also provided assistance with the investigation of this case.  The case is being prosecuted by Assistant U.S. Attorneys Kathryn Haun and William Frentzen of the Northern District of California and Trial Attorney Richard B. Evans of the Criminal Division’s Public Integrity Section.

Some additional, and simply epic in their stupidity details from the criminal complaint: 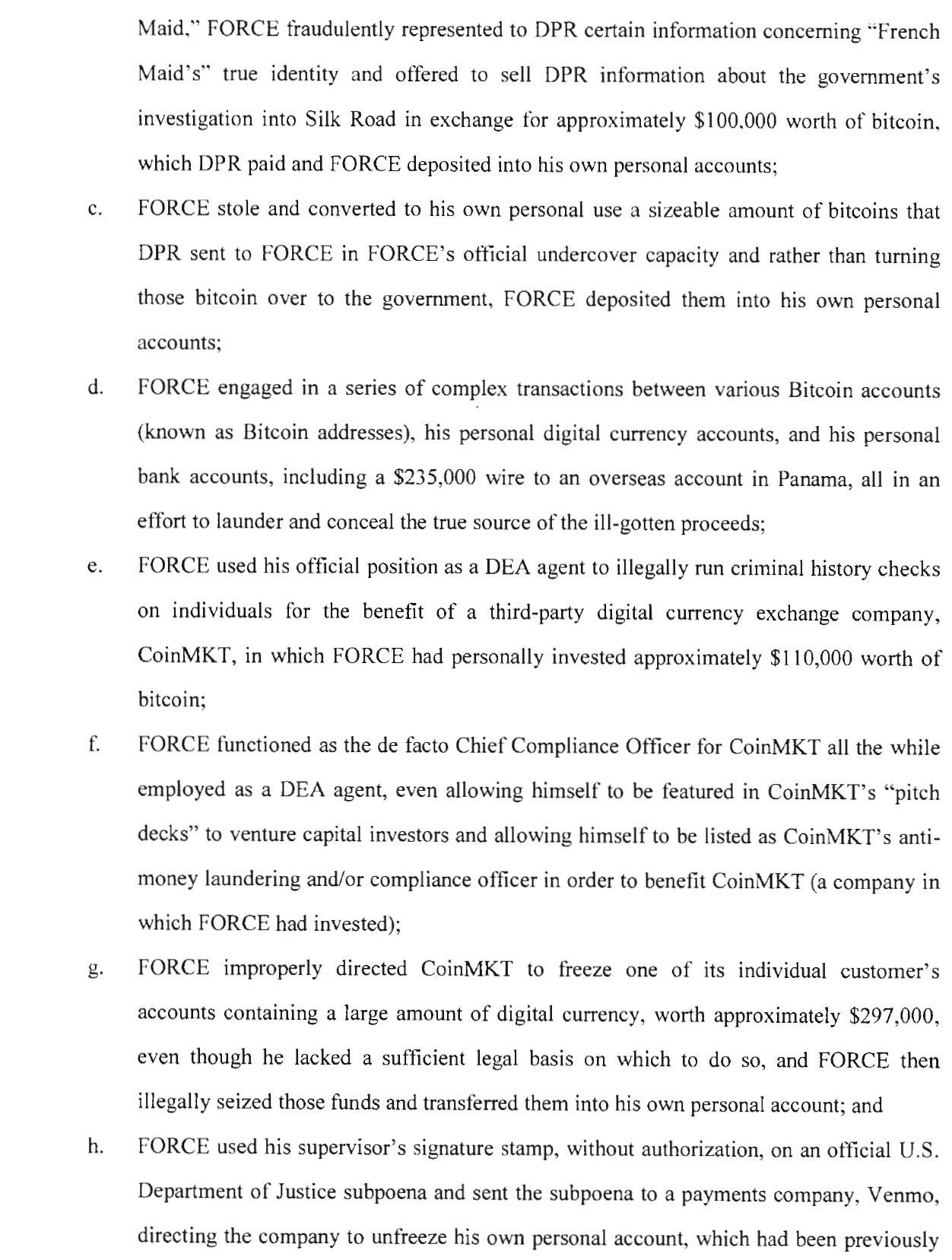 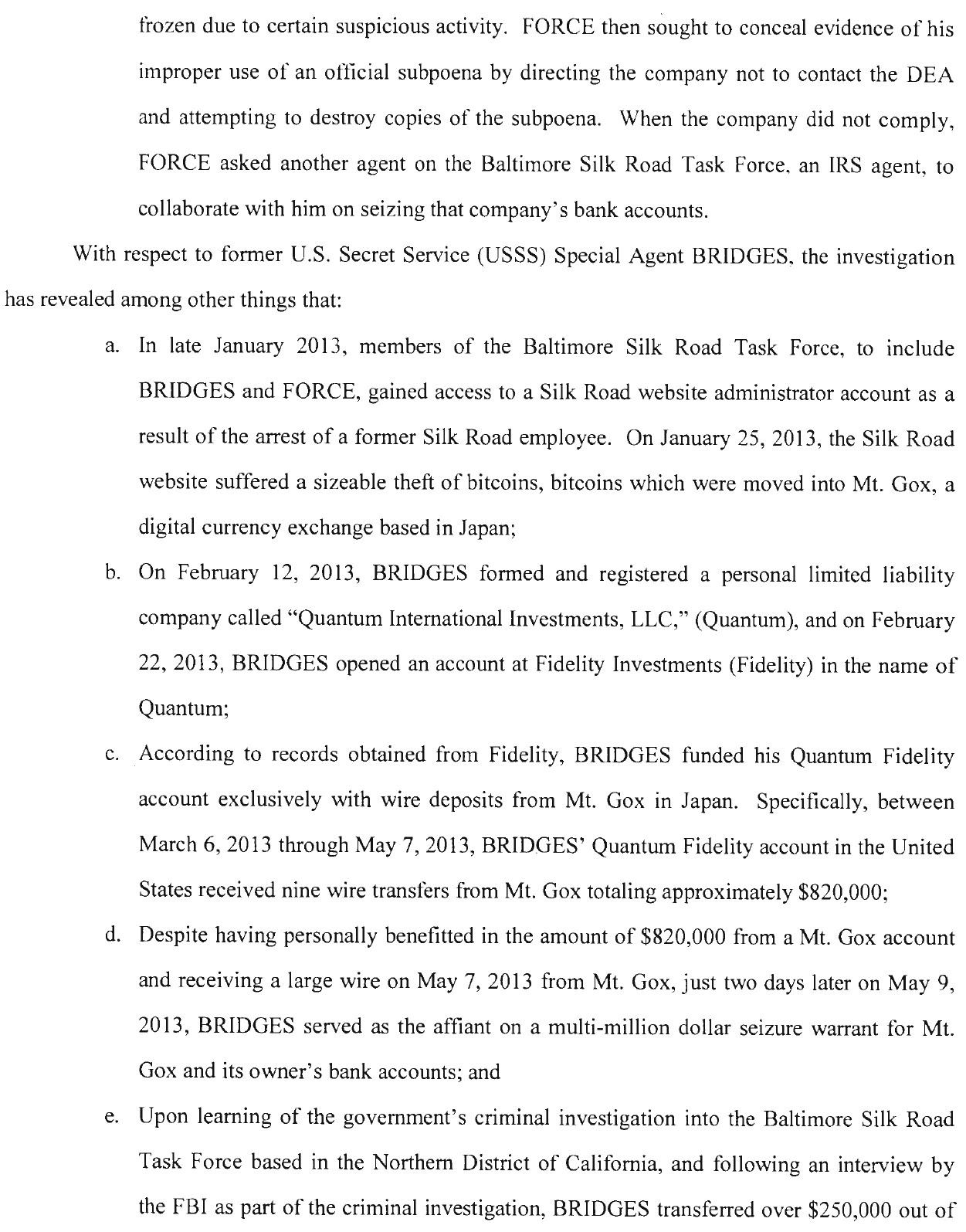 The full criminal complaint can be found here.