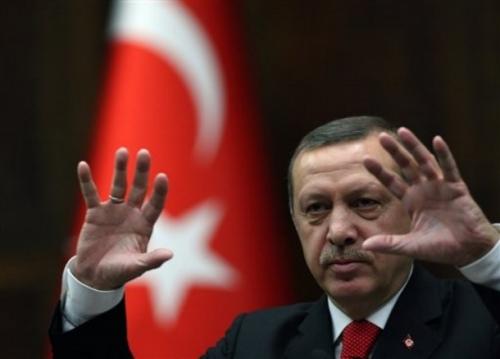 While a source of much schadenfreude by its neighbors and casual onlookers, Turkey has become a glaring example of what happens to a formerly respectable nation as it devolves entirely into a banana republic with not only authoritarian overtones but a police state to boot. And earlier today, Turkey’s conversion to a full blown police state was complete when, after weeks of heated debates and brawls in parliament, Turkey’s government passed a security package expanding police powers, along with an online surveillance law and a discretionary fund for President Recep Tayyip Erdogan to fund covert operations.

In other words, president Erdogan has just voted himself quasi-dictatorial powers with a private police force to defend him.

As Bloomberg details, the parliament voted to approve security laws that allow police to conduct searches and arrests without immediate court orders and use firearms against militants. The law separately empowered government-appointed governors to order police or paramilitary forces to conduct searches and detain suspects for up to 48 hours without immediate court orders, state-run Anadolu Agency said.

Furthermore, protesters are banned from carrying fire crackers, firebombs, iron pellets and slingshots, along with covering faces during demonstrations.

Taking a cue from the US, whose NSA continues to enjoy 4th amendment-busting privileges despite all the Snowden revelations, Turkey’s online surveillance law will allow police to keep wiretapping or monitoring online activities of suspects without court orders for 48 hours. At least in Turkey it’s legally mandated: in the US at last check it was still unconstitutional.

CHP and another opposition party, the Nationalist Movement Party, or MHP, also criticized the surveillance law and a special fund for spending by Erdogan on state affairs, including covert operations “related to the state’s national security and interests,” Anadolu said today.

Meanwhile, Erdogan continues to push for an authoritarian state in which the power of the people has been voided, and only his decisions matter, and is seeking to replace the parliamentary system with a presidential one that expands his powers at the expense of Prime Minister Ahmet Davutoglu’s government. Davutoglu, Erdogan’s hand-picked successor as prime minister and leader of the ruling AK Party, has not clarified his views on a transition to a presidential system.

Again: none of this is unique, and is merely indicative of the various “evolutionary” stages of a small banana republic as its grows into a full-blown banana plantation. And as the much needed money runs out to keep any democracy afloat (see Greece) what happens in Turkey today, will happen in a country near you tomorrow or in the immediate future.