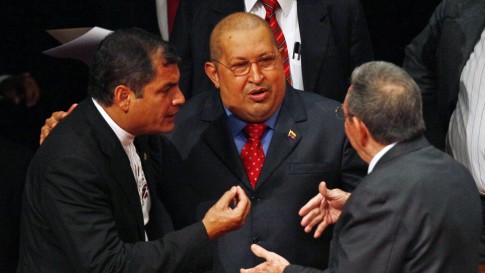 – Ecuadorian President Says The CIA Is Attempting To Overthrow His Government (MintPress/ANTIMEDIA, MArch 25, 2015):

Over the weekend several outlets reported that Ecuador’s President Rafael Correa made comments alluding to the Central Intelligence Agency (CIA) “being increasingly involved in the political opposition with the avowed aim of dragging the country into chaos.”

The reports also claim Correa stated the CIA was attempting to weaken the government through “a series of coordinated nationwide protests.”

However, Ecuador has released a statement claiming the president was speaking about the role of U.S. intelligence services meddling the county’s affairs and support of opposition groups, but not direct involvement in the recent protests.

President Correa tweeted that the AFP incorrectly reported the news and accused the news agency of distorting the truth and misrepresenting his statements.

While it seems in this instance Correa’s word may have been taken out of context, it would not be too surprising if he did make the accusation. For one, there are several reasons relations between the nations have been strained in recent years. In 2013, the Ecuadorian news agency ANDES accused the CIA of plotting to assassinate Correa. Ecuador has not made many political allies in America following the 2009 decision to no longer allow the U.S. to continue to use air bases for surveillance. The country also angered American politicians by granting Wikileaks founder Julian Assange asylum in its London Embassy.

Correa may not be ready to point fingers at the CIA, but Chilean journalist Patricio Mery has claimed the CIA is running a drug operation in Chile, trafficking “about 200 kilos of cocaine per month” from Bolivia in order to fund anti-Correa operations. In recent years Italian police discovered 40 kilos of cocaine in Ecuador’s diplomatic mail. Mery believes senior Chilean officials were involved, and claims to have proof implicating the Ecuadorian government. Check out this interview for more on those allegations.

But Ecuador is not the only nation the CIA has had a hand in toppling. In fact, the history of U.S. intervention and subversion is so rich that even mainstream reporters have to laugh in the face of government propaganda. Recently, State Department spokesperson Jen Psaki claimed

“As a matter of long standing policy the United States does not support transitions by non-constitutional means. Political transitions must be democratic, constitutional, peaceful, and legal.”

That statement drew a laugh and legitimate questioning from Associated Press reporter Matt Lee, who could not believe what he was hearing.

Here is a short list of where the US military or CIA has been involved in supporting protests, supplying weapons, and/or aid. After reading through these, ask yourself this: is the idea of a CIA funded coup or faux revolution really that far fetched?

Iran, 1953 – The independent National Security Archive research institute published declassified documents that prove the CIA was involved in the 1953 overthrow of Iranian Prime Minister Mohammad Mossadegh. The documents are part of the CIA’s internal history of Iran and clearly indicate the agency’s role in disposing of a sovereign ruler.

“The military coup that overthrew Mossadeq and his National Front cabinet was carried out under CIA direction as an act of U.S. foreign policy, conceived and approved at the highest levels of government.”

Guatemala, 1954 – Operation PBSUCCESS was another CIA operation that overthrew an elected leader and created more problems than solutions. President Jacobo Árbenz was removed and replaced with the military regime of Carlos Castillo Armas. Árbenz was a progressive politician who sought to change centuries of feudalism and reduce dependence on foreign nations and companies, including the United States and the American United Fruit Company (UFCO). His policies affected the finances of UFCO and the military intelligence desires of the CIA, leading to a coordinated attack and coup.

Operation Condor, 1970’s – The United States’ support of crimes against the peoples of Argentina, Chile, Uruguay, Paraguay, Bolivia, and Brazil are well-established fact. The CIA carried out Operation Condor, a campaign of political repression and terror involving assassination and intelligence operations implemented in 1975 by the dictatorships of South America. The United States government helped fund and support repressive regimes in each of these nations including Pinochet in Chile,  Former Secretary of State Henry Kissinger was heavily involved in Operation Condor.

Argentina – It has been suspected for years that Kissinger influenced Argentina’s decision to move forward with their repressive campaign. This was finally confirmed since in 2004 when the National Security Archive released a secret memo recounting a conversation between assistant Secretary of State for Human Rights, Patt Derian, and the US ambassador in Buenos Aires, Robert Hill. The two met in April 1977 and discussed a meeting between Henry Kissinger and Argentine Foreign Minister Cesar Augusto Guzzetti. Kissinger gives Guzzetti explicit permission to move forward with whatever they must do to repress “terrorism”.

Paraguay – Another document uncovered by the U.S. National Archives shows the CIA’s involvement in Paraguay as well. A formerly secret CIA Directorate of Intelligence’s Office of African and Latin American Analysis research paper details how the agency never planned on allowing any opposition leaders from ever succeeding Paraguayan dictator General Alfredo Stroessner. The dictator ruled from 1954 to 1989 with the full support of the U.S. Stroessner trained at the infamous School of the Americas in Fort Benning, Georgia and supported the U.S. during the invasion of the Dominican Republic in 1965.

Bolivia, 1971 – Bolivia’s reign of terror including killings, disappearances, and torture of political opponents and activists during the rule of  General Hugo Banzer. A declassified documents includes official transcripts of conversations between Nixon and his chief foreign policy architect, Henry Kissinger.  The leaders of the U.S. government financed and supported the Banzer coup with no regard for the lives of the Bolivian people. Shortly after the U.S. perfected its support of dictators with the rise of Augusto Pinochet.

Chile, 1973 – Nixon, Kissinger, and the CIA helped remove socialist President Salvador Allende, and, following a brief rule by another military junta,  Allende’s army chief, Augusto Pinochet, seized power. Pinochet’s terror and torture has been heavily documented so I won’t go in depth here but it should be another reminder that the United States government once again succeeded in destroying a thriving, sovereign nation and recognized  immoral, violent, and tyrannical dictatorship as a illegitimate form of governance.

Haiti, 2004 – A more recent example of a coup comes from the people of Haiti. Former Haitian President Jean-Bertrand Aristide told CNN that he was forced to leave Haiti as part of a coup organized by the United States. George W. Bush denied the accusations and former White House press secretary Scott McClellan said it was “nonsense”.

“I was told that to avoid bloodshed I’d better leave.”

Shortly after Aristide was removed from power, his ex-wife told U.S. Rep. Charles Rangel, and Rep. Maxine Waters that he would be killed “and a lot of Haitians would be killed” if he did not voluntarily leave. The message had apparently been delivered by the chief of staff of the U.S. Embassy in Haiti.

Honduras, 2009 – Wikileaks helped confirm that once more the U.S. was influencing foreign nations and overthrowing democratically elected governments. The U.S. embassy in Tegucigalpa sent a cable to D.C. making it clear that they believed the changing of power in Honduras that took place in June 2009, “constituted an illegal and unconstitutional coup.” The Embassy admitted that the military did not have the authority to remove President Zelaya, describing it as a “kidnapping”.

The cable was viewed by Tom Shannon, then Assistant Secretary of State for Western Hemisphere Affairs; Harold Koh, the State Department’s Legal Adviser; and Dan Restrepo, Senior Director for Western Hemisphere Affairs at the National Security Council, and former Secretary of State Hilary Clinton. Despite this knowledge the U.S. continued to support and aid the nation. Clinton would later admit to playing a role.

The New York Times even called the US State Department on the coup:

“It’s time to acknowledge the foreign policy disaster that American support for the Porfirio Lobo administration in Honduras has become. Ever since the June 28, 2009, coup that deposed Honduras’s democratically elected president, José Manuel Zelaya, the country has been descending deeper into a human rights and security abyss. That abyss is in good part the State Department’s making.

The headlines have been full of horror stories about Honduras. According to the United Nations, it now has the world’s highest murder rate, and San Pedro Sula, its second city, is more dangerous than Ciudad Juárez, Mexico, a center for drug cartel violence.

This is a very short list that does not even touch on the recent military aggression in Afghanistan, Iraq, Libya, Yemen, and other Middle East nations that seem to be the next targets of US imperialism. It should be painfully clear that the United States government has a long history of creating, supporting, and funding illegal, unelected, military coups that fit into the current political narrative.

For a more detailed list check here. (Yes, I know it is the Alternet. Follow the links, check sources and make up your own mind.)

Without a doubt the United States has a history overthrowing sovereign nations that take steps to free their people from US and NATO hegemony. Is it that hard to believe they may working on similar plans in Ecuador?

Derrick Broze is an investigative journalist, community activist, gardener and promoter from Houston, Texas. He is the co-founder of The Houston Free Thinkers, and The Conscious Resistance Network. Broze also hosts and produces a weekly podcast under the name the Conscious Resistance Live. His writing can be found on TheConsciousResistance.com , The Liberty Beat, the Anti-Media, Mint Press News, Occupy.com and Ben Swann.com 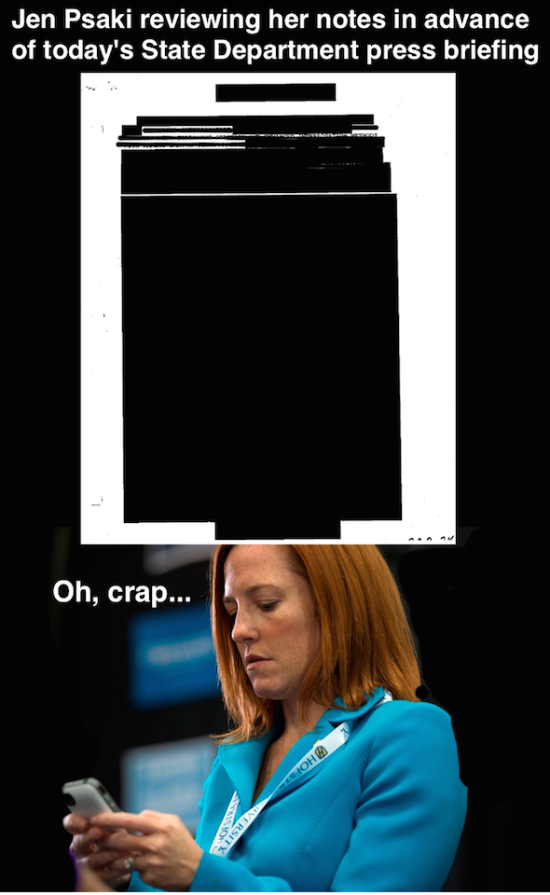