There was a time when Zoltan Poszar was the most important person at the Fed (and Treasury), because he was likely the only person in the government’s employ who grasped the enormity and complexity of the then-$30 or so trillion US shadow banking system. A quick refresh of his bio from the Institute for New Economic Thinking:

Mr. Pozsar has been deeply involved in the response to the global financial crisis and the ensuing policy debate. He joined the Federal Reserve Bank of New York in August 2008 in charge of market intelligence for securitized credit markets and served as point person on market developments for senior Federal Reserve, U.S. Treasury and White House officials throughout the crisis; played an instrumental role in building the TALF to backstop the ABS market; and pioneered the mapping of the shadow banking system which inspired the FSB’s effort to monitor and regulate shadow banking globally. Prior to Credit Suisse, Mr. Pozsar was a senior adviser to the U.S. Department of the Treasury, where he advised the Office of Debt Management and the Office of Financial Research, and served as Treasury’s liaison to the FSB on matters of financial innovation. He also worked with the Federal Reserve Board on improving the U.S. Flow of Funds Accounts.

While Zoltan is currently working in the private sector at Credit Suisse, he is perhaps best known for laying out, back in 2009, the full topographical map of the US shadow banking system in all its flow of assets (or is that contra-assets when it is a repo) beauty.

Which is also why we bring him up, because in a much welcome follow up to his previous work title “A Macro View of Shadow Banking” which we will discuss further in the coming days because it is not only Zoltan’s shadow banking magnum opus and must read for anyone who wants to get up to speed with all the latest development in the unregulated shadow banking space, but because Poszar also provides perhaps what is the most important chart which explains why the Fed is so very terrified of even the smallest possible incremental rate hike of 0.25%.

Specifically, we look at Poszar’s findings about the implied leverage within the fixed income asset space in America’s just a little levered buyside community. This is what he says:

Although no precise measures are available, the presence of leverage among hedge funds with credit and fixed income strategies has been recognized since the LTCM crisis (see Figure 21), as is leverage in separate accounts in the asset management complex.

While hedge funds and separate accounts are allowed to use leverage liberally – in fact, leverage is the sine qua non of these investment vehicles – it is widely underappreciated that bond mutual funds that are typically thought of as unlevered and long-only also have considerable room to use leverage.

The extent to which this room to use leverage is utilized is up to bond portfolio managers to decide, and it is not uncommon for the largest bond funds to maximize the leverage they may bear in their portfolio within the limits allowed by the Investment Company Act of 1940, and the SEC’s interpretation of the portfolio leverage and concentration incurred through the use of derivatives.

However, the creep of leverage into what are traditionally thought of as long-only bond funds was missed by the mainstream economics literature and textbooks entirely. For example, recent works that identify asset managers as the core intermediaries behind the “second phase of global liquidity” focus solely on indirect forms of leverage (FX mismatches) embedded in bond portfolios through holdings of dollar-denominated emerging market sovereign and corporate bonds (see Shin, 2013).

Other works state even more explicitly the widely-held assumption that fixed income mutual funds are unlevered, and analyze episodes of market volatility induced by redemptions without any regard to how direct forms of leverage embedded in fixed income mutual funds may amplify volatility during periods of rising redemptions (see for example Feroli, Kashyap, Schoenholtz and Shin, 2014, Chapter 1 of the International Monetary Fund’s October 2014 Global Financial Stability Report, Chapter 6 of the BIS’ 84th Annual Report, and Brown, Dattels and Frieda, 2014 (forthcoming)).

But all of these views sit uncomfortably with the hard evidence presented above, and recent revelations about “perceived” alphas (see Gross, 2014b) and price action in the interest rate derivative markets amidst soaring redemptions from the largest bond portfolio in the global financial ecosystem – the PIMCO Total Return Fund (see Mackenzie and Meyer, 2014). More concretely, a look at the portfolio of this specific fund provides good examples of the forms of leverage discussed above.

More broadly, the above example demonstrates the evolution of the traditional core product of the asset management industry – long-only, relative-return funds – as it came under pressure from two directions: from hedge funds, offering absolute return strategies, and from passive index-replication products in the form of low-cost exchange traded funds (ETFs). Core-satellite investment mandates became the trend, with hedge funds providing alpha and index-replication vehicles delivering beta at low cost. Traditional asset managers responded to this challenge a number of ways: some by launching their own, internal hedge funds, and some by incorporating into their core products many of the alternative investment techniques used by the hedge funds. These industry trends were the sources of competitive push that drove the above-mentioned creep of leverage into the industry’s traditional, long-only, relative-return bond funds (and hence the rise of levered betas), all designed to stem the flow of assets to the hedge fund competition and command higher fees as the profitability of traditional core products was squeezed (see Bank of New York, 2011 as well as Haldane, 2014). 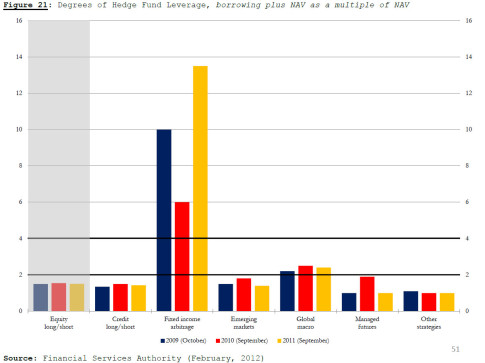 In short, what Poszar is saying is that in a world in which the traditional broker-dealers and banks have indeed reduced leverage and instead use $2.5 trillion in Fed reserves as fungible collateral against which to buy credit derivatives (for example as in the case of JPM’s CIO office and its attempt to corner the IG9 market) the buyside community, which as we have long discussed has largely avoided equities due to fears of a spectacular market implosion (and certainly minimized levered exposure in the space with the exception of several prominent HFT participants) has instead been forced to chase after fixed income products. And chase with leverage that would make one’s head spin as can be seen in the outlier chart above.

Perhaps the key reasons why economists have missed the creep of leverage into the traditionally long-only world of fixed income mutual funds are the conceptual gaps in the way in which the U.S. Financial Accounts (formerly the Flow of Funds) depict the global financial ecosystem, and by extension, the limited mental map it gives to economists who use it to understand asset prices.

… one entity that does understand all this and grasps the momentuous implications of even the smallest quantum of interest rate increase, is the entity where Poszar previously worked: the US Treasury and the Federal Reserve itself.

And so, the next time someone asks “why is Yellen so terrified of even the smallest possible rate hike“, show them this chart above and explain that the Fed vividly remembers what heppened when LTCM blew up. What the Fed doesn’t want, is not one but one thousand LTCMs going off at exactly the same time in what is now the world’s most levered trade…