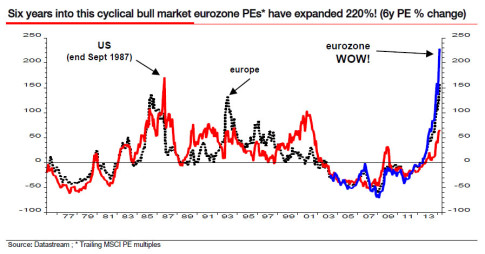 Back in January, when European stocks were only starting their unprecedented QE ramp, we presented the “Driver Behind The European Stock Surge” in which we showed that ever since Mario Draghi’s “whatever it takes” speech in July 2012, European equity prices were up 50% (even higher now) even as corporate earnings had actually declined by 7%. 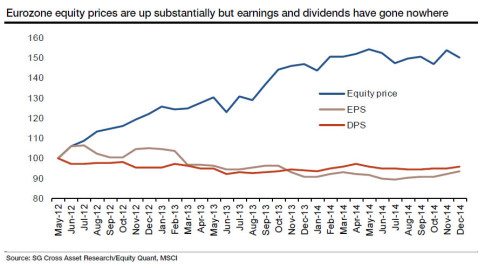 It is a take on the chart above that has sent Albert Edwards over the edge once again, and in his latest letter he presents another way of visualizing the data above, with the help of what he dubs the “WOW!” chart.

Edwards begins with the standard, and well-deserved, rant against central bankers who now merely need – and create – ever greater bubbles in hopes of preserving a system, which can no longer function away from a “bubble” state.

We have long fulminated against strategists who are unwilling to predict sharp market moves. The violent downmove in the euro over the last few weeks is a case in point. Mario Draghi and the ECB’s manipulation of asset prices makes Greenspan’s Fed look like a rank amateur. More shocking though than the plunge in the euro, and more shocking even that 25% of sovereign eurozone bonds now trade in negative territory, is what has happened to eurozone equity valuations. For, as we approach the sixth anniversary of the US cyclical bull market (a post-war record), the PE expansion of eurozone equities is simply off the scale. History suggests this will end very badly indeed. Ask Alan!

What is he talking about? Presenting Albert Edwards’ “WOW!” chart:

This extraordinary multiple expansion is most shockingly illustrated by the chart [above] showing eurozone trailing PEs expanding to the moon (on trailing PE, the eurozone now stands at 20x vs 18.5x in the US). The chart below shows developments for only the past couple of years – this time using the 12m forward PE. The interesting point here is how, despite a profit explosion in Japan, the Japanese forward PE is unchanged at around 14x whereas US and eurozone forward PEs have both surged.

While we agree with everything Edwards is saying, we don’t agree with his assessment that Japan’s epic clobbering of its currency is helping its corporations. Sure, there are benefits, mostly in the area of exports and a brief spike in profitability, which Edwards notes in detail…

The surge in Japanese company profits on the back of the yen?s devaluation since early 2013 is truly extraordinary, but this has not (yet?) fed through to a booming Japanese economy. Like QE, the liquidity surplus has just been to a large extent hoarded despite appeals from government ministers to increase nominal wages at a faster pace. I was chatting about this with our FX strategist Kit Juckes. He raised the notion that dollar strength is net deflationary in developed economies since the mega-devaluation in Japan (and now in the eurozone) seem to have benefited margins and profits rather than boosting export and GDP growth to any great degree.

… but that is not the full story. Indeed, as the Bank of Korea showed last night, Japan’s currency “protectionism” is starting to finally anger its immediate east-Asian neighbors, resulting in a surprise rate cut by the BOK to a record low 1.75%. Furthermore, many have suggested that none other than China, that mercantilist par extraordinaire,  is about to engage its exporting neighbors, leading to the first full-blown Pacific Rim currency war. The only question is when.

Leaving retaliatory timing against the Bank of Japan aside for the time being, something more troubling is starting to emerge in Japan: the very companies who are supposedly benefiting from the collapsing Yen… are about to mutiny against precisely that! From Reuters:

Confidence at big Japanese manufacturers worsened in January-March and is seen turning negative in the second quarter as a slumping yen ramped up the costs of raw material imports, a survey showed, complicating Tokyo’s stimulus-driven campaign to revive the economy.

The quarterly poll by the Ministry of Finance and the Cabinet Office released on Thursday suggests the drawbacks of a weak yen may be outweighing its benefits, which have not spread to broader sectors of the economy.

The loss of confidence comes as the Bank of Japan remains committed to its massive monetary easing programme even as the U.S. Federal Reserve moves closer to raising interest rates, triggering a renewed slide in the yen.

“It could be worrisome if the yen depreciation accelerates under the current deflationary circumstances where companies are unable to pass on costs, causing a profit-squeeze,” said Takeshi Minami, chief economist at Norinchukin Research Institute.

“We hear from companies that they are facing rising raw materials costs on higher import prices, a labour shortage and increase in electricity bills,” said a finance ministry official.

And somehow these increasingly disillusioned companies are expected to boost wages, and cut into their bottom line even more thus allowing the always delayed “trickle down” to take place? Didn’t think so.

What’s worse, once the corporate lobby agrees it has had enough with the collapsing Yen, which over the past year has become the primary carry currency in manipulating none other than the S&P’s E-Mini future, it will end not only the “transitory” Japanese profitability boost, which will promptly roundtrip (as the main problem for Japan is not the price of its imports but their quality, originality and desirability: just as Sony how that is going), but put an end to the great Abenomics experiment, and with it the latest (and this time maybe last) experiment with QE.

As for the ridiculous move in European forward multiples, expect the same outcome, but with a 9-12 month delay.