Amazing Math from the Bureau of Labor Statistics

According to the most recent Bureau of Labor Statistics release, the UE (unemployment) rate fell to 5.5% as of February.  The last time the UE rate was this low was May of 2008.

This means that 14.3 million persons, or 4.4% of the current US population, were added without a single job among them (chart below).  This makes for fascinating math when a 4.4% increase of the total US population without jobs can nearly halve the UE rate down to 5.5%, equal to 2008’s UE rates?!? 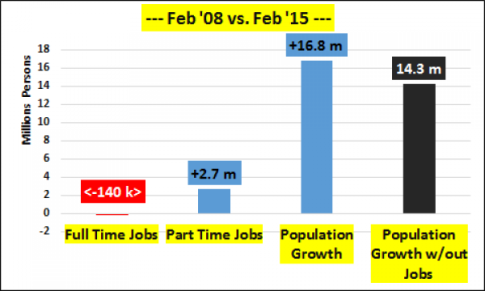