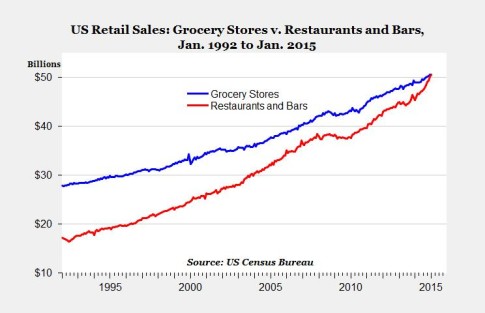 – History Made: For The First Time Ever, US Consumers Spent More On Food In Restaurants Than In Grocery Stores (ZeroHedge, March 4, 2015):

Over the weekend, we mocked the WSJ for glorifying the US “wage recovery” by focusing on the “scarcity” of waiter and bartender jobs (“there is fierce competition” for restaurant workers the WSJ said), a concept well-explored on these pages: we have shown repeatedly that soaring number of waiters and bartenders have been the “backbone”, so to say, of the US job recovery in recent years (alongside energy workers but that ship has now sailed). As it turns out the joke’s on us.

As Mark Perry of the AEI shows, for the first time ever, the spending patterns of US consumers are so skewed, that Americans, or at least a small fraction of them, spent more on restaurants and bars, than what Americans, the much larger fraction, spent on grocery stores to prepare food for themselves.

In other words, when it comes to food, either the bulk of Americans have forgotten how to cook and are hemmorghaning money to overpay for restaurant prepared dinners, or a small fraction of society – i.e., the 1% leisure class – now outspends the majority of the nation, those who can’t afford to eat out no matter the amount of subsidies or handouts by the government, on food.

What is casuing this historic inversion is unclear, but what is clear is that it is full steam ahead fo the “waiter and bartender recovery” until all those Ivy League grads who can no longer finds a job on Wall Street are serving you a burger at your favorite fast food, and recently IPOed, burger place.