– US Soldier: The Enemy Is At Home (Video) 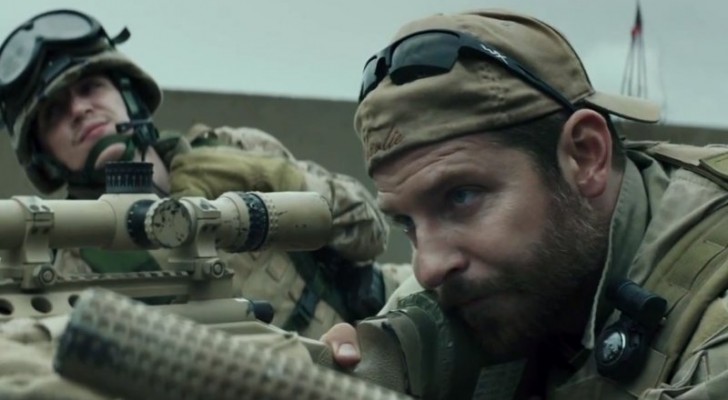 – “The Truth Is Unspeakable.” What A Former American Sniper Has To Say About His Duty In The Iraq War (Collective Evolution, Feb 22, 2015):

This article we will be looking at real-life accounts from an actual American sniper, Garret Reppenhagen. Interestingly enough, Garett has a lot in common with Bradley Cooper’s character from the popular movie, American Sniper (which is in turn based on the story of Chris Kyle). They both enlisted in the military at an older age, were in Iraq in 2004 hunting for Al-Qaeda leader Abu Musab al-Zarqaw, and spent time after duty trying to assist veterans in any way possible. They also both spent countless hours on rooftops, in trash piles, and in windows waiting for the exact right moment… to kill.

The following excerpts are from an interview that Garret had with Dennis Trainor Jr., from Salon.com.

When discussing his first kill, Garett describes the experience:

“I was training for three years to be in the moment to do that, and I did it. It was really an ecstatic feeling that I had. I remember looking at the other guys, seeing if they saw it, because I wanted somebody else to witness it. I remember looking back and he was down in the middle of the road arching his body, spinning on his back and screaming and pulling on his stomach as if I shot him with an arrow and he was trying to pull it out. All the sense of satisfaction just washed away and this horror filled it — this sadness, anger and frustration. I was mad at him that he just didn’t die. I ended up putting another three rounds down and he finally stopped moving. That was the first time I took another life. He looked like he could have been my father. Who knows why he was out there fighting. A lot of people were fighting us because they did not want to be occupied or because they had family members who were hurt or killed and they wanted to get some sort of vengeance. By the end of my tour, it was really hard to justify killing them. We should not have been there in the first place.”

Garett spoke about his feelings towards what he had been trained to do, and how he now feels about it.

“You feel like there is this debt that you build for every life that you take. You feel like you owe the world something because you left it without this other person that could have done something amazing. I think about all of these soldiers coming out of the U.S. military and helping them get jobs and education and hearing about what they aspire to do and be in the world. And I wonder about all of the Iraqis, Syrians and others that we killed in that country and what they aspired to be.”

When asked about his number of confirmed kills, Garett was upset with the question and goes on to explain…

“I wasn’t keeping track and oftentimes there was no confirmation. I feel it didn’t make me a better soldier and certainly doesn’t make me more of a man. If Chris Kyle got 160 confirmed kills, I joke and say that I missed 160 times. I wish that was true. We are talking about human beings and I hate quantifying that. Each life is so precious. We destroy that every time. One was too many, the truth is unspeakable.”

After Garett came home, he began speaking out against war in high schools and colleges.

“I do antiwar talks in high schools and colleges. I stopped telling war stories at these events because no matter how bad and awful it sounds, you can still see the look in kids’ eyes that say, ‘That is the rite of passage, that is how I become a man. I have to go there and live through that horrible shit to know that I am an adult.’”

In regards to the tremendous amount of guilt that Garett was feeling in Iraq, an army chaplain told him that a stronger belief in God would help to alleviate the feeling. Apparently, God was on America’s side, and Garett was fighting for God and his country. Essentially he was told to “get over it, soldier.”

Once back on American soil, Garett sought out help from the American Veterans Association and he was basically told the same thing as before, but in a different way.

“I was taken aside more than once at the VA [during group therapy] and told that the VA is not a platform to express my political views. My recovery hinged on the fact that I felt guilt and shame over committing atrocities against an occupied country. We went over there and brutalized and oppressed, and that is part of my psychological and moral injuries. If I can’t talk about it at the VA, then the VA can’t help me.”

What Can Be Done?

It is important that both sides of the story are being told; everyone has a right to be informed about what is really going on in the war. Get educated on the matter, and inform others if you can. We have to rid ourselves of this glorified portrayal of American soldiers as heroes. This is inaccurate and helps to perpetuate military enlistment, which in turn perpetuates the war itself. What would happen if every soldier in the world simply put down his weapon and said, “no?” Think about it.