Maybe he should resurrect Darth Cheney as Vice President …

Former Florida governor Jeb Bush will announce his foreign policy vision in a speech Wednesday in Chicago. Accompanying that speech is a rollout of a slate of experts who will help guide the candidate on foreign policy issues.If Bush’s goal is to present himself as his “own man,” that list of advisers undermines the point somewhat: 19 of the 21 people on it worked in the administrations of his father or brother. We’ve identified the roles each played in the past three Republican administrations, divvying them up as needed in the following Venn diagram. 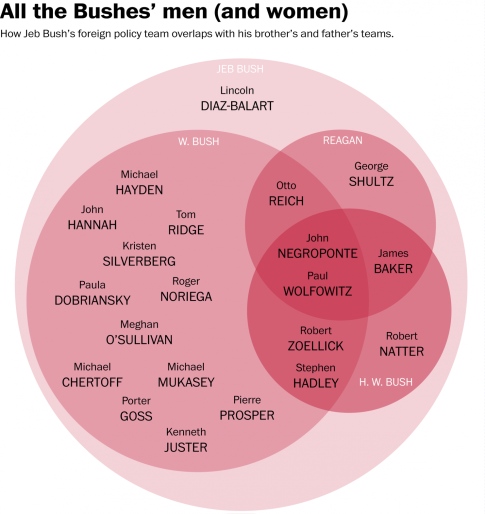 It’s easy to suggest that the above diagram indicates that Jeb Bush is hopelessly linked to his brother and father. But it’s important to remember that the foreign policy team of any Republican president probably would draw heavily from the experience of the past three Republican administrations — each of which had a Bush at or near the top. Many of the foreign policy names on the alternate-universe Mitt Romney transition team appear above — although Romney branched out a bit more. That may be because he was four years closer to the low point of the Iraq war and some of the Bush-era advisers on foreign policy were still too damaged.Bush has access to a lot of people by virtue of his family’s long history in Washington. That can be a mixed blessing. “Each president learns from those who came before — their principles . . . their adjustments,” Bush plans to say in Chicago. “One thing we know is this: Every president inherits a changing world . . . and changing circumstances.” And, on occasion, they inherit the same advisory team.