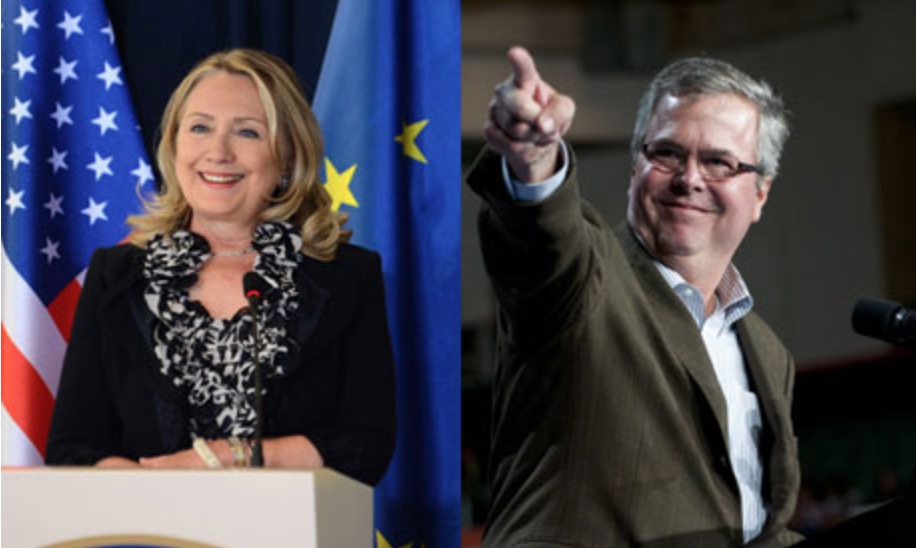 In some ways I’m actually looking forward to the imperial spectacle that will be the Jeb Bush vs. Hilary Clinton Presidential contest in 2016. Just like an alcoholic or drug addict is often unable to shake the cycle of addiction until hitting rock bottom, so too it seems the American peasantry must hit political rock bottom before becoming fed up enough to do something about it; and I can’t imagine a more odious, absurd scenario than being forced to chose between another Bush and another Clinton.

I’ve given Hilary a lot of grief here at Liberty Blitzkrieg, primarily because she’s an oligarch coddling embarrassment (links at the end). Jeb Bush hasn’t received the same treatment as of yet, but I’m going to do my best to make up for lost time.

Just yesterday, I highlighted his unsurprising neocon foreign policy chops in the piece, Jeb Bush Exposed Part 1 – His Top Advisors Will Be the Architects of His Brother’s Iraq War. Specifically, we learned that:

According to Reuters’ Steve Holland, Bush has tapped a “diverse” roster of former George W. Bush and George H. W. Bush officials to advise his burgeoning campaign on foreign policy, including key architects of the 2002 invasion of Iraq.

Imperial war monger: Check. What about his view on let’s say the 4th Amendment of the Constitution? He doesn’t seem to want to be bothered with such trivialities. The Wall Street Journal reports that:

Former Florida Gov. Jeb Bush, who is seriously considering a run for the White House in 2016, said Wednesday that the National Security Agency’s program that collects bulk telephone records was “hugely important,” throwing his support behind the practice as Congress debates whether to reauthorize or limit it.

At an event on foreign policy hosted by the Chicago Council on Global Affairs, Mr. Bush, a Republican, said, “For the life of me, I don’t understand the debate” over the metadata program.

The program’s many supporters say it helps the U.S. government prevent terrorist attacks. But its critics believe it exists with little oversight and few boundaries and could allow the government to spy on U.S. citizens.

Interesting, how did the Wall Street Journal fail to mention that former NSA chief Keith Alexander admitted that the spying hasn’t achieved much of anything. In the 2013 article, NSA Chief Admits “Only One or Perhaps Two” Terror Plots Stopped by Spy Program, we learned that:

The Obama administration’s credibility on intelligence suffered another blow Wednesday as the chief of the National Security Agency admitted that officials put out numbers that vastly overstated the counterterrorism successes of the government’s warrantless bulk collection of all Americans’ phone records.

Pressed by the Democratic chairman of the Senate Judiciary Committee at an oversight hearing, Gen. Keith B. Alexander admitted that the number of terrorist plots foiled by the NSA’s huge database of every phone call made in or to America was only one or perhaps two — far smaller than the 54 originally claimed by the administration.

As we know, never let the truth get in the way of a good story. Back to the WSJ.

Mr. Bush’s comments are significant, as the legal authority that allows the program to exist is set to expire in June. Congress is weighing whether to rework the program in a way that would strip the NSA of some of its powers.

Mr. Bush – as he made evident during his comments in Chicago – supports more government spending on the military and a broader military influence.

Does Jeb Bush truly not understand that some people—indeed, quite a lot of people—might find a vast, secret, program to spy on millions of citizens to be a little bit creepy? That many in the public might understandably find this to be a potential government overreach, or an abuse of federal power?

Perhaps he really doesn’t. If so, that should disqualify him from the GOP’s presidential nomination before his run even officially starts. But I doubt that he is truly as flummoxed by concerns about the program as his dismissive remark suggests.

Instead, I suspect he knows all too well what the program entails, what its critics argue, and why it has remained a topic of controversy for so long. But Jeb Bush does not want to defend the particulars of the initiative so much as he wants to publicly stand by his brother’s administration and then settle the issue by declaring that it is not one. Despite his declaration yesterday that he is his “own man,” and not his brother or father, he would not even broach the possibility that his brother’s program might be deserving of any critique.

Put another way: Jeb Bush claims he doesn’t understand the debate because he doesn’t want there to be a debate. But there is one, and if he is to run for president, he will have to take part in it.

BINGO. It’s like a Jedi mind trick. “These are not the drones you’re looking for…there is no debate, what debate, move along peasants…”

First, this would be really funny if it was an Onion article as opposed to real life: Jeb Bush to Present the “Liberty Medal” to Hillary Clinton

This is Why Rand Paul is Hilary Clinton’s Worst Nightmare

Welcome to the Oligarchy suckers: