One year ago, when HFT powerhouse Virtu launched its first attempt to go public and finally gave the world a glimpse into its trading perfection engine, we were stunned to learn that through the “miracles” of frontrunning, momentum ignition, quote stuffing, subpennying and all those other market manipulation techniques that have made HFT a staple – if extremely profitable – parasite of fragmented, broken “markets”, in its S-1 it wrote that “as a result of our real-time risk management strategy and technology, we had only one losing trading day during the period depicted, a total of 1,238 trading days.” We urged readers to “let that sink in: one trading loss day and 1237 days of profits.” To paraphrase: one losing day in five years of trading. We said that “that, ladies and gentlemen, is the Holy Grail of the New Normal broken, manipulated markets.“

A month later, Michael Lewis published Flash Boys and finally explained to the common person (if not corrupted, captured and purchased SEC regulators) what we have been pounding the table since 2009: that as a result of HFTs, markets are now two-tiered, unfair, broken, fragmented and manipulated in broad daylight, and since the HFT lobby controls the SEC, nothing will change.

Subsequent to Flash Boys, Virtu decided to pull its IPO due to the backlash against algorithmic rigging. However, now that a year has passed, and the S&P is some 400 points higher, thanks mostly to that other master market rigger, the Federal Reserve and its central bank peers, everything has been forgotten and forgiven. After all, who cares if the market is rigged and broken if as a result it goes higher, right?

Which brings us to yesterday, when Virtu decided to give its IPO another go, and filed an amended S-1, in which there was nothing really new: all the same rigging strategies remain, and were not only not punished, but were rewarded with $723 million in revenue in 2014.

But the punchline, and the reason why the joke continues to be on everyone else who still believes in “fair and efficient markets”, is that Virtu just updated its trading record for 2014.

Here is the stunner which takes the Holy Grail of trading, and throws it right into the twilight zone of aggravated, constant market manipulation:

“The chart below illustrates our daily Adjusted Net Trading Income from January 1, 2009 through December 31, 2014. The overall breadth and diversity of our market making activities, together with our real-time risk management strategy and technology, have enabled us to have only one overall losing trading day during the period depicted, a total of 1,485 trading days…” 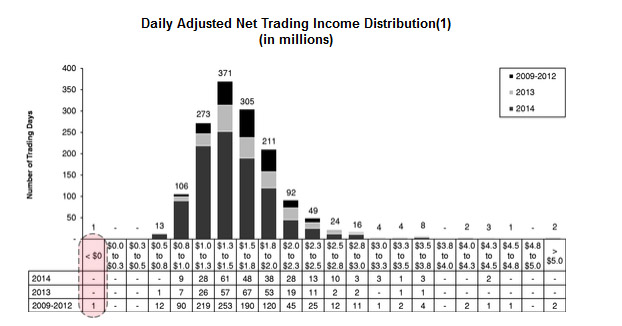 Actually not only did Virtu not have a trading day loss in all of 2014, but on its “worst” trading day, the firm made “only” $800,000 to $1,000,000, the highest “worst” bucket in its history, suggesting that even as trading volumes continue to collapse, Virtu gets more and more aggressive with its “strategies”, something that can be seen on the chart below showing the increasing prepondrance of higher profitable trading days in 2014 vs 2013. 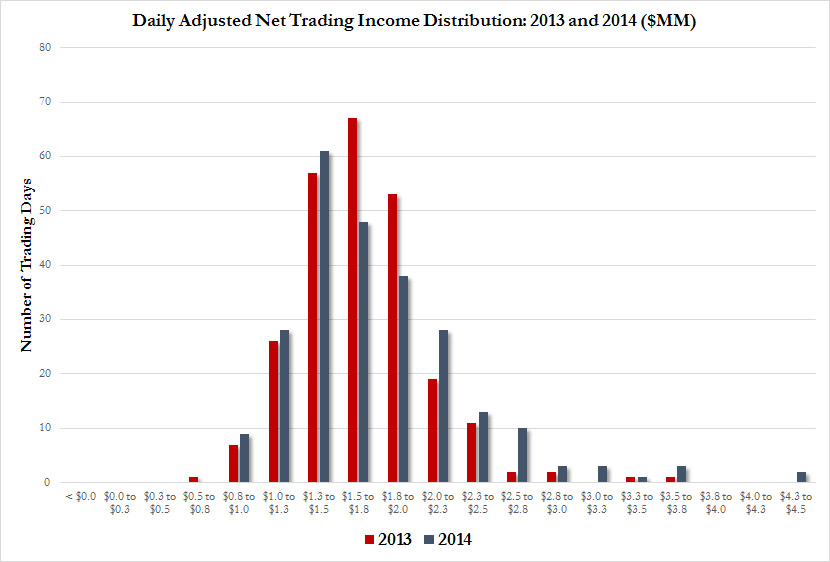 And this is how Virtu explains its unprecedented trading succes, one which takes the Holy Grail of trading and updates its to Ver 2.0:

“Technology and operational efficiency are at the core of our business, and our focus on market making technology is a key element of our success. We have developed a proprietary, multi-asset, multi-currency technology platform that is highly reliable, scalable and modular, and we integrate directly with exchanges and other liquidity centers. Our market data, order routing, transaction processing, risk management and market surveillance technology modules manage our market making activities in an efficient manner and enable us to scale our market making activities globally and across additional securities and other financial instruments and asset classes without significant incremental costs or third-party licensing or processing fees.”

Which is just a lot of fancy words for perfectly legal, regulator-endorsed and risk-free frontrunning of legitimate trades.

This is a successful track record of 99.93%, or as the SEC and the math PhDs who have taken over the market would call it: “perfectly normal.”