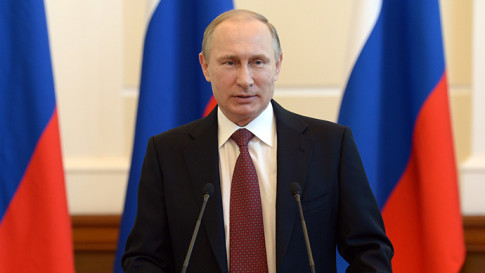 Vladimir Putin said that Kiev is being armed by Western allies, according to Moscow’s information, but insisted he was “optimistic” about implementing the Minsk agreement, noting that the intensity of fighting has declined.

“According to our data, weapons are already being supplied [to Kiev],” the Russian leader said at a press conference following his meeting with Hungarian Prime Minister Viktor Orban. “This is not surprising. I am convinced that whoever is supplying the weapons, the number of victims may grow, but the outcome will not change. The vast majority of soldiers serving in the Ukrainian army have no motivation to participate in an internecine conflict away from home, while the Donbass militia have every reason to defend their families.”

Putin urged the Ukrainian government “not to prevent the soldiers in the Debaltsevo cauldron from surrendering, or at least not punish those who simply want to save their lives.”

Up to 5,000 Ukrainian troops are thought to be surrounded in this key area deep inside rebel territory.

“Our mission is to save the lives of those caught in the cauldron, and to make sure that the situation does not inflame relations between Kiev and the rebels further,” Putin said.

Nonetheless, Putin repeatedly emphasized that the situation was “more or less quiet” elsewhere on the front, and said that he was “more of an optimist than a pessimist” about the implementation of the Minsk agreement.

Putin believes that last week’s negotiations between Germany, France, Ukraine and Russia laid out a long-term framework for the resolution of the conflict.

“It’s extremely important that the authorities in Kiev have agreed to carry out a deep constitutional reform, to satisfy a desire for self-rule in certain regions – whether that reform is called decentralization, autonomization or federalization. This is the deeper meaning of the Minsk accords.”