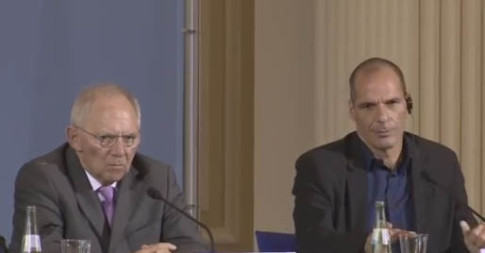 – Schauble Gives Athens Another 10-Day Ultimatum, Says “Up To Greek Government If It Wants To Keep Euro” (ZeroHedge, Feb 17, 2015):

Those who thought yesterday’s trial balloon headline barrage would be bad, you ain’t seen nothing yet. It all started with Spain’s economy minister who knows if the Greek revolt gains traction his career will be cut short by a Podemos surge, said:

… and ultimatum Greece has soundly ignored. And therein lies the rub, because Europe is not used to being ignore, and certainly not used to having its non-ultimatum ultimatums snubbed.

Which is why moments ago the biggest gun of all, German FinMin Schauble came out, with the following:

It already has: the answer is no.

Wait, what? It was only a year ago when both the IMF’s Christine Lagarde and then-Greek PM Samaras were praising the Grecovery. Were they lying, or was the “W” in Wreckovery silent.

And finally, the gloves has fully come off:

Because at the end of the day, this is the biggest leverage Europe has: as Greece continues to play hard to catch, Europe has finally made it clear that it never was about reform, or democratic process, or anything that idealistic socialists find near and dear. No: it was always and only about the artificial currency, without which trillions in legacy wealth will disappear into thin air, as will German’s export miracle.

So just in case the first Ultimatum was not clear enough, here is the second and final one:

And as everyone knows, if it isn’t Germany’s way, it is the Autobahn. Which reminds us: perhaps for Greece it is time for another call into the Eurasian Economic Union?