While military officials have stated that their “advisers” are not involved in the fighting, WaPo reports that ISIS militants have seized an Iraqi town within two miles of the Ayn al-Asad base where 300 US military advisers are stationed. The region remains under “severe threat” and the local council has called for “immediate and urgent military reinforcements” after the attack on the town of al-Baghdadi, which began in the early morning.” It seems those non-boots-on-the-ground advisers are about to get a taste of what President Obama promised they would not… 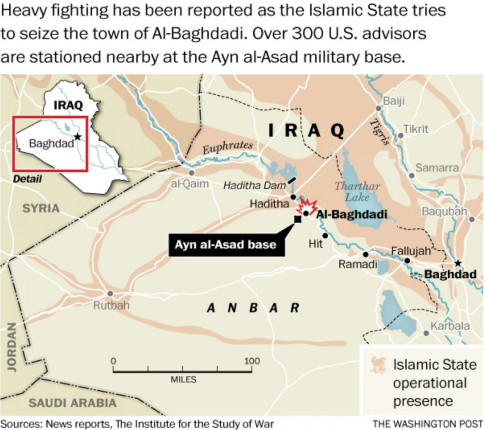 Islamic State militants seized parts of a town in Iraq’s western province of Anbar on Thursday, sparking fierce fighting within miles of a military base where hundreds of U.S. advisers are stationed.

Anbar’s provincial council called for “immediate and urgent military reinforcements” after the attack on the town of al-Baghdadi, which began in the early morning. Ayn al-Asad air base — where some 320 U.S. personnel have been training Iraqi troops and tribal fighters — lies five miles west of the town. At one point, the militants controlled 90 percent of the town, a local official told Reuters.

The clashes so close to U.S. forces will raise concerns as President Obama makes a formal request for congressional authority to use military force against the Islamic State, a move critics argue could open the door to real engagement with the militants on the battlefield.

In a statement, the U.S. military confirmed that there had been “heavy fighting” in al-Baghdadi on Thursday. It said there was no direct attack on the base, though there were “reports of ineffective indirect fire in the vicinity.”