This morning, my Twitter stream was filled with some of the most outlandish bullish economic victory laps from pundits I’ve ever seen. The source was the monthly employment report, which showed a larger than expected increase in employment as well as higher wages. In addition, there was a huge upward revision to employment data in November. Interestingly enough, on the same day this report was released, several important articles came across my screen that make me as concerned as ever about the true state of the economy and where we are headed.

Got a job while Obama was president? Then there’s a good chance you are working in healthcare or food service or as a temp.

Those sectors were responsible more than 60% of the jobs created since Obama took office in January 2009.

Healthcare now employs 14.9 million Americans, up 11% over the past six years, according to a recent Pew Research Center report. More than one in 10 payroll jobs in the U.S. are in this industry.

Much of the job growth in healthcare has taken place in home health care services and outpatient care. That follows both the aging of America and the shift away from more costly hospital and nursing home care. These later two industries added only 3.7% and 1.2% more jobs, respectively, since 2009.

Meanwhile, bars, restaurants and other food-service employers have also been adding to their payrolls. More than 10.8 million people now work in this industry, up 14.6% over the past six years.

And temporary help agencies saw their employment soar 52.5% during the Obama administration to just under 3 million. 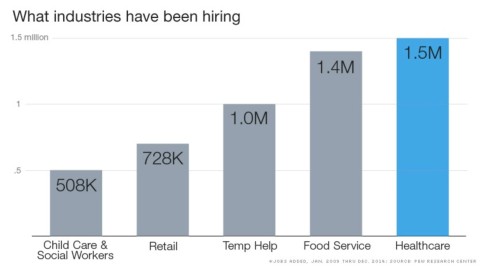 For concerning story number two, I turn your attention to a New York Times article titled: Global Debt Has Risen by $57 Trillion Since the Financial Crisis, Which Is Scary. Here are a few excerpts:

Here are two things we know about how debt affects the economy.

First, in the abstract it doesn’t matter. For every debtor there is a creditor, and in theory an economy should be able to hum along just fine whether a country’s citizens have a great deal of debt or none. A company’s ability to produce things depends on the workers and machines it employs, not the composition of its balance sheet, and the same can be said of nations.

Second, in practice this is completely wrong, and debt plays an outsize role in creating boom-bust cycles across the world and through history. High debt increases the amplitude of economic swings. To think of it in terms of the corporate metaphor, high reliance on borrowed money may not affect a company’s level of output in theory, but makes it a great deal more vulnerable to bankruptcy.

That’s what makes a new report from McKinsey, the global consulting firm, sobering. Researchers compiled data on the full range of debt that countries owe — not just their governments, but corporations, banks and households as well. The results: Since the start of the global financial crisis at the end of 2007, the total debt worldwide has risen by $57 trillion, rising to 286 percent of global economic output from 269 percent.

So far, the Chinese government has skillfully managed a slowdown in economic growth and signs of a housing boom reaching its end, but whether it will be able to avoid a sharper correction is one of the great questions hanging over the global economy.

How skillfully has it really managed the slowdown? It feels as if every other day I see stories about increased authoritarianism and new internet crackdown measures. I think China is way more politically vulnerable than people recognize.

Still, if you accept our starting premise — that high debt, whether public or private, makes economies more vulnerable to economic shocks and tends to fuel booms and busts — the report offers plenty to worry about.

But the solutions they offer are big policy changes that would happen only glacially. The reality that economic policy makers around the world must grapple with, especially those in China and Japan, is that eight years after a financial crisis brought on by high debt, we may not have learned as much as we would like to think we have.

However, what is most disturbing about the above when it comes to the United States, is that more than half a decade after a crisis fueled partly by questionable debt considered AAA, U.S. debt to GDP is up 16 percentage points to 233% of GDP.It is well known that much of the increase in public debt has been the result of trying to prop up the economy. Yet we just learned that 60% of the new jobs created since 2009 have been of very low quality. Recall that “temporary help agencies saw their employment soar 52.5% during the Obama administration to just under 3 million.” What do you think things are going to look like during the next cyclical downturn?

Finally, we arrive at the following related article of the day. This one is from Bloomberg and titled: The Simple Reason Millennials Aren’t Moving Out Of Their Parents’ Homes: They’re Crushed By Debt. Here are a few excerpts:

Millennials are not budging from their parents’ basements, even though the job market is on the mend. One really big reason? Student loans.

Last year, the rate of 25- to 34-year-olds living at home rose to 17.7 percent among men and 11.7 percent for women, Census data showed last week. That is a record high for both genders.

To make things even worse, a super-hot housing market is making it too expensive for even gainfully employed millennials to get their own place.

There’s so much important information in this short article it’s incredible. First, the piece blames the living in basement phenomenon on debt levels. What happened to the notion that debt doesn’t matter?

I’d add that an equally important factor is that most of the jobs created in the Obama years have been menial, low paying jobs. As I highlighted earlier.

The last point though is the most interesting. It notes that “a super-hot housing market is making it too expensive for even gainfully employed millennials to get their own place.”

This is quite bizarre, since it is millennials themselves who should be driving the housing market. That would be the case if the entire public policy response post-2008 was anything more than an oligarch bailout.

An unbiased observer can plainly see that the entire post-crisis response has been to do “whatever it takes” to protect the power, prestige and wealth of politicians, central bankers, Wall Street, and the super rich. It was a leveraged bailout of the status quo. It certainly hasn’t succeeded at all in fostering a healthy free-market economy.

The results speak for themselves, and funneling even more money to oligarchs isn’t going to change the situation. As I mentioned on Twitter earlier today:

As the Middle Class Evaporates, Global Oligarchs Plan Their Escape from the Impoverished Pleb Masses

Welcome to the Recovery – U.S. Child Homelessness Hits Record as Poverty in Mass. is Highest Since 1960