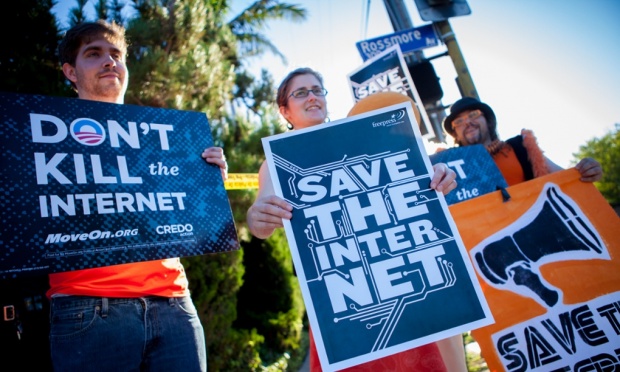 Proposing a titanic legislative shift on net neutrality after a years-long push from internet activists, the head of the Federal Communications Commission (FCC) is preparing to push through “the strongest open internet protections ever”.

“The internet must be fast, fair and open. That is the message I’ve heard from consumers and innovators across this nation,” FCC chair Tom Wheeler wrote in an editorial for Wired magazine published on Wednesday. “The proposal I present to the commission will ensure the internet remains open, now and in the future, for all Americans.”

Wheeler’s proposals – to all but reclassify the internet as a public utility – come after the FCC has received more than 4m public comments on its proposals, the biggest overhaul of US regulation of the internet since the presidency of George W Bush.

The new rules will be sent to the regulator’s commissioners on Thursday, before a crucial vote at the end of the month. While the FCC has the support of president Barack Obama, the proposals have stoked Republican ire about over-regulation and will face intense lobbying from the cable industry in the coming weeks.

FCC officials, speaking on background, said the new rules would:

Wheeler is set to press for broadband internet to be regulated under Title II of an overarching communications act. Under Bush, broadband was classified as an “information service” and escaped the regulatory burden associated with telecommunications, which are considered a utility.

The shift would give the FCC far greater powers to step in and act if it spots potential broadband abuses – and hand the FCC oversight of mobile broadband, a fast growing area, for the first time.

However, officials said the FCC would not set prices or force cable companies to share their networks and would “forbear” parts of the act they believe would hamper innovation.

Last May, Wheeler proposed regulating broadband under Section 706 of the Telecommunications Act, a move supported by the cable companies. Such a policy shift could have allowed cable operators to create “fast lanes” for some users in return for higher fees – a move critics charged would kill “net neutrality”, the concept that all traffic should be treated equally online.

While Section 706 only allows fast lanes that are “commercially reasonable”, Wheeler wrote in Wire that he became concerned “that this relatively new concept might, down the road, be interpreted to mean what is reasonable for commercial interests, not consumers.”

Wheeler said he now believed the FCC needed to use Title II to protect an open internet. On Thursday, he is expected to release draft orders to his fellow commissioners from the United States’ top telecommunications regulatory agency, ahead of a landmark vote on 27 February.

“Using this authority, I am submitting to my colleagues the strongest open internet protections ever proposed by the FCC,” Wheeler wrote. “These enforceable, bright-line rules will ban paid prioritization, and the blocking and throttling of lawful content and services. I propose to fully apply – for the first time ever – those bright-line rules to mobile broadband.

Wheeler’s proposals come as Republican critics work on their own legislation, which could effectively stymie his efforts. Senator John Thune is proposing legislation that would ban fast lanes and throttling but would not increase the FCC’s regulatory authority over the cable industry.

Last month Thune, the chairman of the Senate Commerce Committee, called Title II a “desperate path” that would upset the “light touch” regulation he said had allowed innovation to flourish online.

“The cable industry has repeatedly voiced our support for sensible net neutrality rules which accomplish the important protections that president Obama and others have supported – no blocking, no throttling, no paid prioritization and transparency of business practices – and can be enacted without the significant regulatory baggage that comes with public utility regulation,” he said.

Doug Brake, a telecommunications policy analyst at the Information Technology and Innovation Foundation, an industry lobby group, said the shift to Title II was an “unjustified, overblown response to what has in actuality been a by-and-large hypothetical concern”.

But activists – who have bombarded the FCC with demands for stronger regulation – continue to charge that cable companies will stifle innovation by “picking the winners” if they are allowed to charge those who can pay more for faster access.

The FCC was effectively left without rules to govern broadband after a court sided with Verizon’s successful challenge to its authority to regulate the industry in January 2014. Officials said they expected fresh legal challenges but were confident they could be overcome.

Chris Lewis, vice president of government affairs at advocacy group Public Knowledge, commended Wheeler for his support of Title II authority. “This is a historic announcement by chairman Wheeler, and a decision that consumers have been demanding for some time,” he said.

Tiffiniy Cheng, co-founder of Fight for the Future, which has organised a series of protests for net neutrality, said: “We’ll be ramping up the pressure to make sure the details are right, but the significance of the FCC moving to use Title II rules to protect net neutrality is undeniable – it is an awe-inspiring, unprecedented victory for the public and the internet freedom movement against DC’s fiercest lobbies.

“Every internet activist who has signed a petition, made a call or showed up at a protest deserves to celebrate. It’s crucial that we keep the pressure on both the FCC and Congress to make sure they get the details right, but no matter what happens from here, we’ve already accomplished more than any pundit, lobbyist or cable CEO thought was possible.”