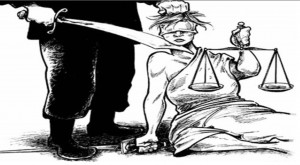 When Eric Holder announced his resignation, many of us breathed a sigh of relief thinking it can’t get much worse, but not so fast. The authoritarian streak and rampant cronyism of the Obama administration is a well oiled machine. You didn’t think you’d get off that easily did you? Enter Loretta Lynch.

As a prosecutor Ms. Lynch has also been aggressive in pursuing civil asset forfeiture, which has become a form of policing for profit. She recently announced that her office had collected more than $904 million in criminal and civil actions in fiscal 2013, according to the Brooklyn Daily Eagle. Liberals and conservatives have begun to question forfeiture as an abuse of due process that can punish the innocent.

Naturally, that was just the tip of the iceberg. What we have learned from her ongoing confirmation hearing is that she’s a lover of NSA spying and the death penalty, while disagreeing with the statement that “marijuana is no more harmful than alcohol.”

I wonder if she has much personal experience to base this opinion on, or if it’s just more of the same we “know what’s best for you plebs, despite the fact that we have no idea what we are talking about.”

Meet the new Attorney General, same as the old. From the New York Times:

Ms. Lynch had steeled herself for tough questioning from a new Republican-controlled Judiciary Committee, particularly on her views of President Obama’s immigration policy. But the questioning was mostly cordial, and, most important, the Republicans on the committee who hold the key to Ms. Lynch’s confirmation — she needs three of their votes to proceed to a vote by the full Senate — showed little opposition.

Of course it was cordial. Other than perhaps immigration, she basically espouses complete and total neo-con principals.

On the issue of immigration, Ms. Lynch said she found it “reasonable” that the Justice Department had concluded it was lawful for Mr. Obama to unilaterally ease the threat of deportation for millions of unauthorized immigrants. Mr. Holder similarly endorsed that view.

Democrats see some Republicans, such as Senators Lindsey Graham of South Carolina, Orrin G. Hatch of Utah and Jeff Flake of Arizona, as possible confirmation votes. Mr. Flake said he had made no decision on Ms. Lynch but had come away with a favorable impression and expected that she would be confirmed.

Senator Sheldon Whitehouse, a Rhode Island Democrat on the panel, said she had given “a flawless performance.” Senator Richard Blumenthal, Democrat of Connecticut, called her testimony “among the most accomplished and impressive that I’ve seen as a member of this committee.”

WASHINGTON — In advance of her nomination hearing, Loretta Lynch did what every cabinet nominee is required to do: fill out a questionnaire listing all her media interviews so lawmakers can evaluate her candor. But the questionnaire U.S. attorney general nominee Lynch submitted to the Senate Judiciary Committee has a notable omission. Lynch failed to include an interview in which she defended the controversial settlement she orchestrated with the bank HSBC.

The bank was accused of knowingly allowing Mexican drug cartels to launder money and of allowing violations of economic sanctions against countries including Iran, Libya, Sudan and Cuba. Lynch, then the U.S. Attorney for the Eastern District of New York, allowed the bank to avoid prosecution in 2012 by paying a $1.9 billion fine and submitting to a monitor for five years to oversee compliance. Critics slammed the deal as an example of the Obama administration’s pattern of going easy on the financial industry. In the Dec. 11, 2012, interview she did with CBS News, Lynch endorsed the settlement and dismissed criticism of the deal as “shortsighted.”

Lynch’s boss at the time of the HSBC deal, Assistant Attorney General Lanny Breuer, who was then head of the Department of Justice’s criminal prosecution division, resigned after a scathing Frontline piece that highlighted Justice’s failure to try any of the banks tied to the recession and the risky trades that led to it. It was during a discussion of HSBC before the Senate Judiciary Committee that Attorney General Holder famously said some banks — although not HSBC specifically — were too big to prosecute.

Well there you have it. This woman, like Eric Holder, will be an unmitigated disaster for freedom in America.

For a related article, see: