It would appear Gazprom has once again come knocking for payment – or else. As Bloomberg reports, Ukraine is pressing the Obama administration to provide political support, as much as $3b in financial aid and “non-lethal weapons,” with the goal of some progress by the end of February, Ukrainian Deputy Foreign Minister Vadym Prystaiko says. Of course, given Europe’s agreement to further sanction Russia (asEU agrees more “punitive” steps are now possible) President Obama will be happy to lend Ukraine more American taxpayer money(despite the market’s perception that Ukraine’s default probability is over 80% – six year highs). 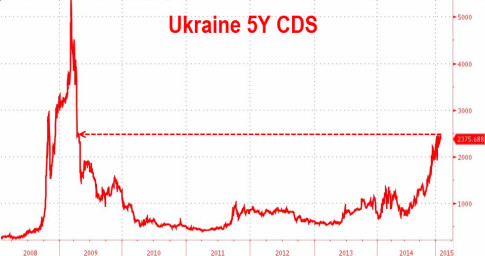 Top priorities are political and financial aid, then military support Prystaiko says during meeting with Bloomberg editors and reporters in Washington