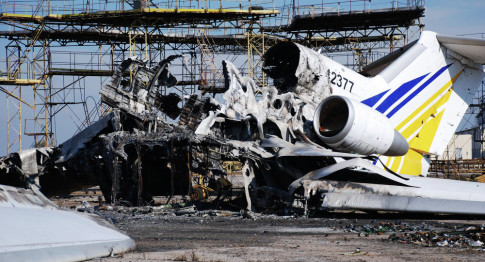 A senior commander of the self-proclaimed Donetsk People’s Republic’s military reported Monday that American-made weapons, M16-A5 assault rifles, grenades, as well as means of communication were found in the Donetsk airport, previously occupied by the Kiev-led troops.

DONETSK, January 19 (Sputnik) – US-made weapons, as well as hundreds of high-power explosives, were found in the Donetsk airport, previously occupied by Ukrainian military, a senior commander of the militia of the self-proclaimed Donetsk People’s Republic said Monday.

“During the investigation of the new terminal, our units found large numbers of American-made weapons. Those are M16-A5 assault rifles, grenades, as well as means of communication,” Eduard Basurin, deputy commander of DPR militia, told journalists.

According to Basurin, hundreds of high-power explosives were found, “a simultaneous explosion of which would make the whole Donetsk shudder.” The DPR engineering units are currently neutralizing the explosives, Basurin said.

Last week, DPR’s Defense Ministry announced that the Kiev-led troops had left the contested territory of the Donetsk airport. Small groups of Ukrainian soldiers were later encountered in the vicinity of the airport, but were allowed to leave to avoid casualties. A spokesperson for Kiev forces denied the information of the withdrawal.

During last week’s press conference, following the withdrawal, the DPR leader Alexander Zakharchenko said that US-made weapons were found. According to Zakharchenko, an M16 rifle was found in the airport.