The global central bank balance sheet is even more concerning.

As to the hyperinflation question,

Draghi’s answer is simple: we have now thrown the kitchen sink at the deflation problem and there has been no inflation (he conveniently forgets to mention that the world is now caught in a vicious spiral in which every single central bank is printing money just to export deflation to its peers, with more and more printing necessary each year just to stay in one place). In other words, just because hyperinflation hasn’t materialized so far, it never will.

Or, as Bernanke would say: “Hyperinflation is contained.”

As for Draghi’s comment at the end, one can respond just as snydely: for the people who say printing money will create growth, yes “when” please. And for those who say that money printing will lead to economic improvement, “tell me, within what?”

As for Draghi’s “statute of limitations” comment, he may be right, but one thing is also becoming clearly obvious: as central banks are poised to monetize a record amount of debt this year, 7 years into the “recovery”, and as the amount of eligible collateral dwindles to a point where the functioning of the entire market is becoming impaired (see the TBAC’s complaints from the summer of 2013), the moment of “hyperinflationary containment” is coming to an end. 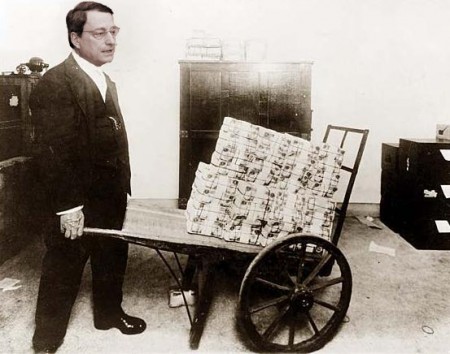