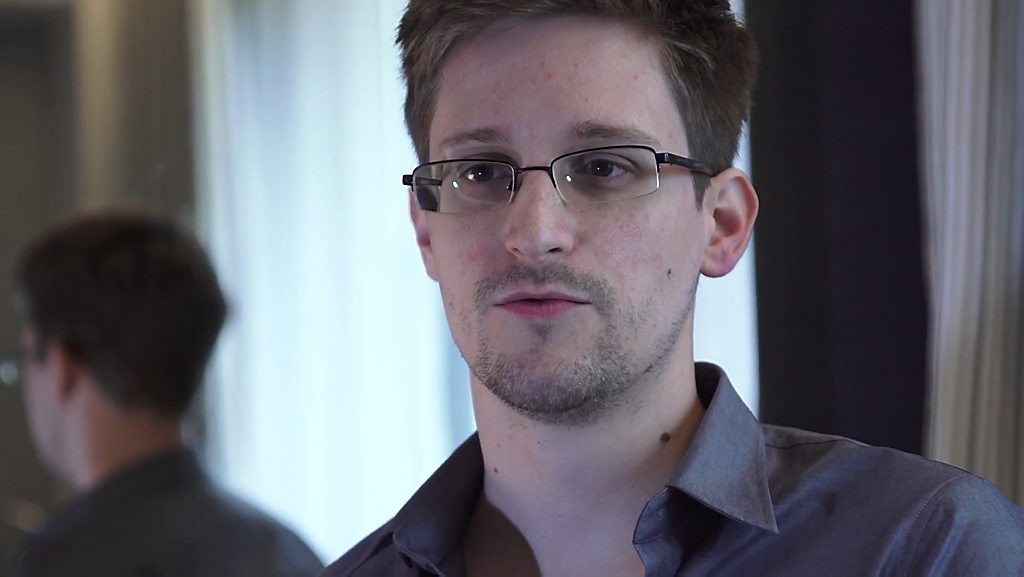 Sometimes cognitive dissonance, which used to be called contradiction, rings a gong so loud it knocks you off your chair.

But if you’re an android in this marvelous world of synthetic reality, you get up, put a smile back on your face, and trudge on…

Let’s see. NSA is the most awesome spying agency ever devised in this world. If you cross the street in Podunk, Anywhere, USA, to buy an ice cream soda, on a Tuesday afternoon in July, they know.

They know if you keep the receipt for the soda or leave it on the counter.

They know whether you’re wearing shoes or sneakers. They know the brand of your underwear. They know your shaving cream, and precisely which container it came out of.

But this agency, with all its vast power and its dollars…

Can’t track one of its own, a man who came to work every day, a man who made up a story about needing treatment in Hong Kong for epilepsy and then skipped the country.

Can’t find him in Hong Kong, where he does a sit-down video interview with Glenn Greenwald of The Guardian. Can’t find that “safe house” or that “hotel” where he’s staying.

No. Can’t find him or spy on his communications while he’s in Hong Kong. Can’t figure out he’s booked a flight to Russia. Can’t intercept him at the airport before he leaves for Russia . Too difficult.

And this man, this employee, is walking around with four laptops that contain the keys to all the secret spying knowledge in the known cosmos.

Can’t locate those laptops. Can’t hack into them to see what’s there. Can’t access the laptops or the data. The most brilliant technical minds of this or any other generation can find a computer in Outer Mongolia in the middle of a blizzard, but these walking-around computers in Hong Kong are somehow beyond reach.

And before this man, Snowden, this employee, skipped Hawaii, he was able to access the layout of the entire US intelligence network. Yes. He was able to use a thumb drive.

He walked into work with a thumb drive, plugged in, and stole…everything. He stole enough to “take down the entire US intelligence network in a single afternoon.”

Not only that, but anyone who worked at this super-agency as an analyst, as a systems-analyst supervisor, could have done the same thing. Could have stolen the keys to the kingdom.

This is why NSA geniuses with IQs over 180 have decided, now, in the midst of the Snowden affair, that they need to draft “tighter rules and procedures” for their employees. Right.

Now, a few pieces of internal of security they hadn’t realized they needed before will be put in place.

But somehow, over the years, they’d overlooked this corner of their own security. They’d left a door open, so that any one of their own analysts could steal everything.

Could take it all. Could just snatch it away and copy it and store it on a few laptops.

But now, yes now, having been made aware of this vulnerability, the agency will make corrections.

And reporters for elite US media don’t find any of this hard to swallow.

A smart sixth-grader could see through this tower of fabricated baloney in a minute, but veteran grizzled reporters are clueless.

Last night, on Charley Rose, in an episode that left me breathless, a gaggle of pundits/newspeople warned that Ed Snowden, walking around with those four laptops, could be an easy target for Chinese spies or Russian spies who could get access to the data on those computers. The spies could just hack in.

But the NSA can’t. No. The NSA can’t find out what Snowden has. They can only speculate.

This whole Snowden affair is an op. It’s the kind of op that works because people are prepared to believe anything.

The tightest and strongest and richest and smartest spying agency in the world can’t find its own employee. It’s in the business of tracking, and it can’t find him.

It’s in the business of security, and it can’t protect its own data from its employees.

If you believe that, I have timeshares to sell in the black hole in the center of the Milky Way.

In previous articles (see Spygate on this blog), I’ve made a case for Snowden being a CIA operative who still works for his former employer. He was handed a bunch of NSA data by the CIA. He didn’t steal anything. The CIA wants to punch a hole in the NSA. It’s called an internal turf war. It’s been going on as long as those agencies have existed side by side.

“In April, as part of its 2014 budget request, the Pentagon [which rules the NSA] asked Congress for $4.7 billion for increased ‘cyberspace operations,’ nearly $1 billion more than the 2013 allocation. At the same time, budgets for the CIA and other intelligence agencies were cut by almost the same amount, $4.4 billion. A portion of the money going to…[NSA] will be used to create 13 cyberattack teams.”

But in this article, let’s stay focused on the fairy tales, which are the cover stories floated to the press, the public, the politicians.

We have reporters at the Washington Post and at The Guardian. We have Julian Assange, the head of Wikileaks. They’re all talking to Snowden. The NSA can spy on them. Right? Can listen to their calls and read their emails and hack into their notes. Just like people have been hacking into the work and home computers of Sharyl Attkisson, star CBS investigative reporter.

But the NSA can’t do all this spying and then use it to find Snowden. Just can’t manage it.

So…everybody in the world with a computer has passwords. The NSA can cut through them like a sword through hot butter. But Assange and the Post and Guardian and Snowden must have super-special passwords.

They got these passwords by sending a stamped self-addressed envelope, along with 25 cents, and a top from a cereal box, to The Lone Ranger. These passwords are charged with atomic clouds that obscure men’s minds so they cannot see or spy. They’re immortal and invulnerable.

The NSA can spy on anyone else in the world, but they can’t get their foot in the door, when it comes to the Post, The Guardian, and Assange.

And if Snowden winds up in Ecuador, that too will become an insurmountable mystery.

“Nope, we don’t know where he is. He’s vanished. Ecuador has a Romulan shield surrounding it. The cloaking technology is too advanced.”

Perhaps you recall that, in the early days of this scandal, Snowden claimed he could spy on anyone in the US, including a federal judge or even the president, if he had their email addresses.

Uh-huh. But the combined talents of the NSA, now, can’t spy on Snowden. I guess they just can’t find his email address.

Snowden isn’t the only savvy computer kid in the country. There must be a million people, at minimum, who can cook up email addresses that evade the reach of the NSA. Yes?

And in the midst of this, a whole lot of people are saying, “Don’t look too closely. Snowden is a hero and he exposed the NSA and that’s a wonderful thing.”

And a whole lot of other people are saying, “Snowden is a traitor and he should be tried for treason or killed overseas. That’s all you need to know.”

The truth? Well, the truth, as they say, is the first casualty in war. But in the spying business, the truth was never there to begin with. That’s one of the requirements of the industry.

Son, if you think you’ve lied before, you haven’t got a clue. We’re going to tell you to do things that’ll make your head spin. That’s the game we’re in. We’re going to make you tell lies in your sleep.”

And these are the people the public believes.

It’s a beautiful thing. It really is. The fairy tales are made of sugar and the public, the press, and the people eat them. And then they ask for more.