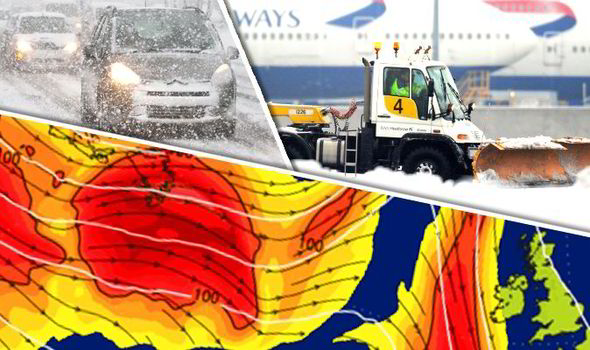 Panicked forecasters raised the alert in the past hour after spotting the freak system on the weather models.

Rare in the UK it is identical to the phenomenon which triggered crippling whiteouts and ice storms in the United States.

Sparked by the frenzied and volatile behaviour of the jet stream it threatens to bring the fury of the North Pole tearing across the country NEXT WEEK.

Forecasters say temperatures will plunge to below -15C (5F) while feet-deep snow drifts on a par with the worst winters in history are likely.

The whole of the UK will be scourged by screaming Arctic gales and blizzards right through the first half of February.

A repeat of the historic freeze of 2010 which brought the coldest temperatures on record and ground airports to a standstill, is feared.

Weather experts say they have issued a stark warning to emergency services and the Government to take action now.

Airports, railway lines and roads are expected to grind to a shivering halt with extreme cold threatening the lives of thousands of people.

Piers Corbyn, forecaster for WeatherAction, warned a “catastrophic” set of circumstances have come together to trigger a lethal spell of weather.

He said: “This could lead to anything, gales, huge snowstorms and the lowest temperatures of winter so far.

“We are now 95 per cent certain that the whole of the country will be affected from the start of February.

“Such is the severity of this situation I have written to the Government’s Cabinet Office Briefing Room (COBRA) committee urging them to take immediate action.”

The terrifying prediction is the result of a deeply meandering jet stream which has been largely responsible for the erratic weather this winter.

At the start of the season forecasters warned this big freeze would hit towards the end of December, but the frenzied deviation of the jet stream nudged it out of the way.

The fast-flowing band of air is now poised to shift to a much more southerly position allowing the contents of the North Pole to flood into the UK.

Mr Corbyn said: “This is going to be a severely damaging spell of weather, the NHS is thoroughly unprepared and has been lucky up until now as it has not been too severe.

“But this is about to change dramatically with a displaced Polar vortex likely to dominate the weather for the first half of next month.”

Weather charts show the jet stream violently churning across the Atlantic, sweeping in dips and troughs over the UK.

It has been travelling unusually fast resulting in the storms being  pulled in from the Atlantic at the beginning of the year.

Forecasters warn it is cranking up a gear again threatening more wind and rain this week before whipping freezing cold air down from the Arctic region.

James Madden, forecaster for Exacta Weather, said the entire country could be blanketed in a carpet of snow by the end of next week.

He explained the chaotic winter surge is being bolstered by a strong negative Arctic Oscillation AO.

The AO describes the pattern of air flow around the northern hemisphere, when a negative phase it pulls Arctic air towards the UK.

Mr Madden said after this sets in the country will be plunged into a lengthy and severe big freeze.

He said: “We are now about to enter a significant and prolonged pattern change to even colder conditions, which will also be accompanied by frequent and widespread snow events across the whole country.

“From the middle part of next week cold air of an Arctic origin will begin to surge in across the whole of the country.

“This will also bring the risk of almost nationwide snow showers.

“The cold and wintry theme will also remain as the more dominant feature over the next several weeks at the very least, and it will tighten its grip even more and gradually worsen throughout February as a strong blocking pattern develops.

“The final part of January and February period is now shaping up to something that could be on a similar par to December 2010 at the very least.

“There is likely to be frequent and heavy bouts of snow across the whole country, severe blizzards, and major ice problems.”

The Met Office warned of widespread wintry showers as temperatures plummet close to -10C (14F) by the end of the week.

He said freezing winds from Greenland and Canada will make it feel even colder with snow and widespread frosts on the cards.

He said: “From Wednesday onwards we are back into a cold snap which will initially last five or six days.

“Winds from the north will see wintry showers picking up with snow right through to low levels later in the week.