… and most probably also incredibly toxic! 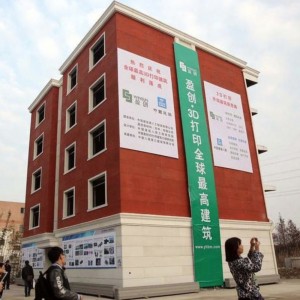 The following story is simply fascinating. Provided this and similar structures are able to stand the test of time, it will have unbelievably deflationary consequences for home prices across the world.

This month, architects in Amsterdam started work on the world’s first completely 3D-printed house. It’ll take three years and quite a bit of money to finish. Meanwhile, in Shanghai, a company claims to have printed ten houses with inexpensive industrial scraps in less than a day. What’s the difference?

It depends on your definition of 3D printing. Both projects are using massive 3D printers; in Shanghai, it’s 490 feet long, 33 feet wide, and 20 feet deep. Rather than expensive plastic, though, the Chinese company WinSun Decoration Design Engineering Co is printing with a concrete aggregate “made in part from recycled construction waste, industrial waste, and tailings,” according to the Architect’s Newspaper. Each of these homes costs less than $5,000.

But the biggest difference is that WinSun is printing its houses in pieces, then fully assembling them on site, at least according to 3Ders.org‘s recent report. In Amsterdam, every single room, detail, and piece of furniture will emerge fully formed. This is why some commenters are likely to argue that WinSun’s project isn’t truly 3D-printed.

But let’s not quibble over syntax here. If these claims are true, WinSun is printing an inexpensive, sturdy home in mere hours for very little money.

Prior to that post, I highlighted an incredible video in which, Behrokh Khoshnevis, predicts all of this. See: 3D Printing Entire Homes and Neighborhoods May be Just Around the Corner.

It appears all of this may have finally arrived. CNET reports that:

While architectural firms compete with their designs for 3D-printed dwellings, one company in China has quietly been setting about getting the job done. In March of last year, company WinSun claimed to have printed 10 houses in 24 hours, using a proprietary 3D printer that uses a mixture of ground construction and industrial waste, such as glass and tailings, around a base of quick-drying cement mixed with a special hardening agent.

Now, WinSun has further demonstrated the efficacy of its technology — with a five-storey apartment building and a 1,100 square metre (11,840 square foot) villa, complete with decorative elements inside and out, on display at Suzhou Industrial Park.

Although the company hasn’t revealed how large it can print pieces, based on photographs on its website, they are quite sizeable. A CAD design is used as a template, and the computer uses this to control the extruder arm to lay down the material “much like how a baker might ice a cake,” WinSun said. The walls are printed hollow, with a zig-zagging pattern inside to provide reinforcement. This also leaves space for insulation.