Once again the mainstream media peddled the spoon-fed propaganda that world leaders “led the march” to honor the victims of the Paris shootings last week. Glorious photo-ops of Merkel, Hollande, Poroshenko, David Cameron (oh, and not Barack Obama) were smeared across front pages hailing the “unity in outrage.” However, as appears to be the case in so many ‘events’ in the new normal managed thinking in which we live, The Independent reports, French TV has exposed the reality of the ‘photo-op’ seen-around-the-world: the ‘dignitaries’ were not in fact “at” the Paris rallies but had the photo taken on an empty guarded side street…

A different perspective on the leader’s portion of the march has emerged in the form of a wide shot displayed on French TV news reports.

It shows that the front line of leaders was followed by just over a dozen rows other dignitaries and officials – after which there was a large security presence maintaining a significant gap with the throngs of other marchers.

The measure was presumably taken for security reasons – but political commentators have suggested that it raises doubts as to whether the leaders were really part of the march at all.

Ian Bremmer, a US political scientist and founder of the Eurasia Group, said: “All those world leaders: Not exactly ‘at’ the Paris rallies.”

Another US commentator, Gerry Hassan, called the leaders’ contribution “pseudo-solidarity”.

Perhaps even more ironically,nine of those countries represented in the march are in the final third of the World Press Freedom Index, compiled annually by Reporters Without Borders. 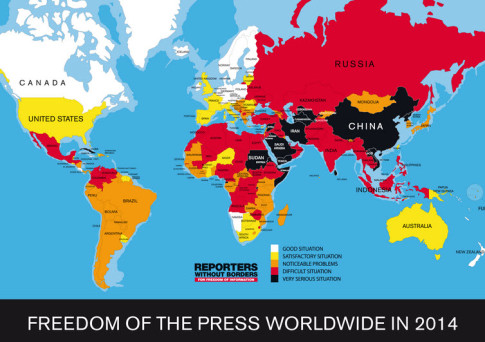 “Je Suis Charlie” if and only if it suits our purpose at that very moment in time…?