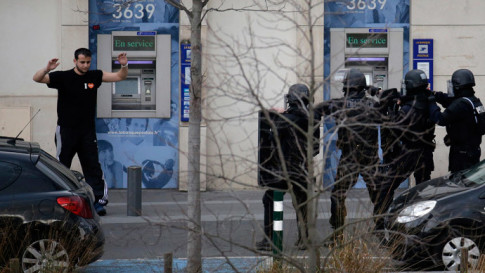 A suspect in a hostage taking situation raises his arms in the air as he is detained by members of special French RAID forces outside the post offices in Colombes outside Paris, January 16, 2015.(Reuters / Philippe Wojazer)

Several people were taken hostage by an unknown gunman at a post office in Colombes, a northwest suburb of Paris, French media reported. After negotiations, the assailant handed himself over to police.

The gunman was armed with a Kalashnikov rifle, a gun and numerous grenades, French RTL radio reports. From two to five people were taken hostage, say police sources. The incident took place at about 12:00 GMT.

After negotiations with the assailant began, reports emerged that an unknown number of hostages was released and the gunman eventually surrendered to police.

BFM TV says no one was injured in the incident.

The hostage-taker “is disappointed in love”, local prefecture told Liberation newspaper, adding that the hostage taker is a customer “who lost his head” and speaks of “heartbreak.”

Sources told AFP that the man was “speaking incoherently“.