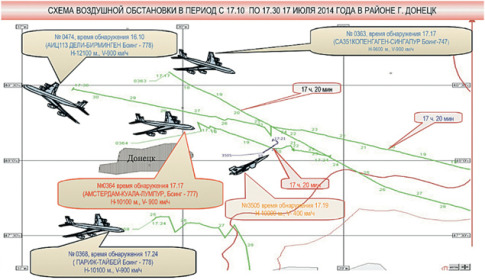 Back in July it was all everyone could talk about: who shot down Malaysian Airlines flight MH-17 flying over east Ukraine? A hurriedly-prepared official report (by Western authorities) quickly put the blame on Russia, ignoring any suggestion the downing may have been the result of a Ukraine fighter jet, and said the catastrophe was the result of a Russian-made missile shot by Russian separatists. Then the story promptly disappeared. Russia, however, continued digging, and overnight, Russia’s Investigative Committee says it has uncovered evidence Ukraine was involved in the crash citing a military defector from the Ukraine.

The RIC said, as summarized by Bloomberg, that it interrogated a Ukraine military defector who has evidence the Boeing jet shot down in July may have been targeted by Ukrainian military SU-25 plane, according to website statement. The witness claims to have spoken to SU-25’s pilot, according to whom the SU-25 in question was carrying R-60 air-to-air missiles.  The SU-25 returned to base after flight without its missiles.  The pilot summarized that “MH-17 was in wrong place at wrong time.” Tell that to the families of over two hundred innocent casualties of war.

The Committee statement adds that Russia may provide witness state protection and that  Russian investigators ready to share data with international crash investigators.

Some further details in AFP’s coverage of the topic: “The witness, who was not named, worked at an airfield in the Ukrainian city of Dnipropetrovsk where he claimed to have seen a warplane take off on July 17 with air-to-air missiles and return without them. An Investigative Committee statement said the testimony of the man “is important proof that Ukrainian military was implicated in the crash of the Boeing-777”.

The statement by investigators came the same day that Kiev and the separatists were to hold a new round of ceasefire talks, and shortly after Russian tabloid Komsomolskaya Pravda published an interview with the “secret witness” who said he worked at the airport on the day the Boeing 777 was downed.

The man, who was filmed by the newspaper with his back to the camera and even the back of his head blurred, said he saw a Sukhoi-25 jet take off armed with air-to-air rockets and return to the base without them. 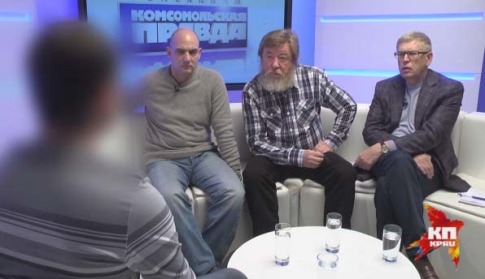 “[The plane’s operator] could have launched them into the Boeing out of fear or revenge,” the witness said, identifying the pilot of the jet as having the surname Voloshin. “Maybe he mistook it for another plane.”

Komsomolskaya Pravda claimed the witness showed up at its office by himself and that his identity checks out, but did not identify him because his family is still in Ukraine.

The investigative committee said the man — who was now officially a witness — could be enrolled in a witness protection program.

Here is the full statement from the Investigative Committee, google translated:

Investigators last night they were able to meet with the Ukrainian military defector, who confirms that voluntarily left the military unit and moved into the territory of the Russian Federation.

He told investigators about the last days of service in one of the units of the Air Force of Ukraine. From the way he behaved, what facts the voice, the investigators did not have doubts in sincerity and awareness of the witness of the events that took place in the military unit.

From the testimony of the witness now, that in order to ensure its safety aliased, civil aircraft “Boeing 777” Flight MH-17 could be brought down by July 17 of this year, combat aircraft SU-25 Ukrainian Air Force, piloted by Captain Ukrainian Air Force pilot Voloshin. In this case, sortie was carried from the airport, stationed near the city of Dnipropetrovsk. it is at this airfield served as a witness. According to his testimony, he personally saw the plane before takeoff Voloshin was fused rockets “air-to-air” type R-60, which in normal conditions the implementation of sorties Su-25 do not fit. As the witness said, in a similar outfit aircraft simply was not necessary, as the representatives of the people’s militia armed with no aviation.

The witness immediately noticed that on his return to the airfield aircraft missiles in the equipment of the aircraft has no, and then he distinctly heard the words of the pilot Voloshin, said one of his colleagues: “He – the plane – was not at the time and in the wrong place.”

Those facts and information, which are located and which are clearly not being confused, the witness said, convince investigators that his testimony true, by the way, and confirmed research on polygraph. For the investigation of these readings are very important, and most importantly, that they coincide with the data that were available for investigators from other sources and confirm the fact of being in the air Ukrainian Su-25 during the crash “Boeing.” In particular, from the testimony of several witnesses – Ukrainian citizens living in the area of impact “Boeing 777”, it follows that shortly before the crash they saw in the sky in the vicinity of the passenger liner military aircraft.

Thus, the testimony of a witness are not the only one, but a very important proof that a collapse of the “Boeing” Ukrainian armed forces are involved.

As a witness may be in danger, the investigation decides whether to grant him state protection for the witness protection program.

Investigation Committee will be to continue to collect and analyze all the data about the crash. In this case, if the representatives of the international commission investigating the crash that actually interested in establishing the truth and turn to us, we are ready to provide all available materials.

The full interview that took place on Komsomolskaya Pravda with the alleged defector, along with supporting materials, can be found here. Sadly in the end this is just more verbal allegations and more “he said, she said” accusations, in what will almost surely remain an unresolved crash in which over 200 innocent people were the now deceased pawns in a lethal realpolitik game in which the cost of a human life is nothing.